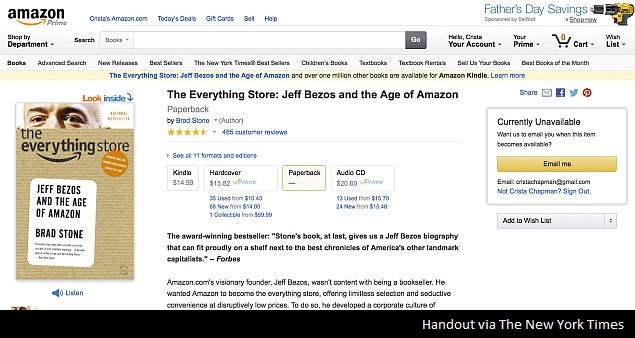 Amazon's power over the publishing and bookselling industries is unrivaled in the modern era. Now it has started wielding its might in a more brazen way than ever before.

Seeking ever-higher payments from publishers to bolster its anemic bottom line, Amazon is holding books and authors hostage on two continents by delaying shipments and raising prices. The literary community is fearful and outraged - and practically begging for government intervention.

"How is this not extortion? You know, the thing that is illegal when the Mafia does it," asked Dennis Loy Johnson of Melville House, echoing remarks being made across social media.

Amazon is, as usual, staying mum. "We talk when we have something to say," Jeffrey P. Bezos, founder and chief executive, said at the company's annual meeting this week.

The battle is being waged largely over physical books. In the United States, Amazon has been discouraging customers from buying titles from Hachette, the fourth-largest publisher by market share. Late Thursday, it escalated the dispute by making it impossible to order Hachette titles being issued this summer and fall. It is using some of the same tactics against Bonnier Media Group in Germany.

But the real prize is control of e-books, the future of publishing.

Publishers tried to rein in Amazon once, and got slapped with a federal antitrust suit for their efforts. Amazon was not directly a party to the case but has reaped the rewards in increased market power. Now it wants to increase its share of the digital proceeds. The publishers, weighing a slide into irrelevance if not nonexistence, are trying to hold the line.

Late Friday afternoon, Hachette made by far its strongest comment on the conflict.

"We are determined to protect the value of our authors' books and our own work in editing, distributing and marketing them," said Sophie Cottrell, a Hachette senior vice president. "We hope this difficult situation will not last a long time, but we are sparing no effort and exploring all options."

The Authors Guild accused the retailer of acting illegally.

"Amazon clearly has substantial market power and is abusing that market power to maintain and increase its dominance, which likely violates Section 2 of the Sherman Antitrust Act," said Jan Constantine, the Guild's general counsel.

Amazon is also flexing its muscles in Germany, delaying deliveries of books from Bonnier.

"It appears that Amazon is doing exactly that on the German market which it has been doing on the U.S. market: using its dominant position in the market to blackmail the publishers," said Alexander Skipis, president of the German Publishers and Booksellers Association.

The association said its antitrust experts were examining whether Amazon's tactics violated the law.

"Of course it is very comfortable for customers to be able to order over the Internet, 24 hours a day, seven days a week," Skipis said. "But with such an online structure as pursued by Amazon, a book market is being destroyed that has been nurtured over decades and centuries."

Christian Schumacher-Gebler, chief executive for Bonnier in Germany, said the group's leading publishing houses had noticed delays in deliveries of some of its books several weeks ago and confronted the retailer.

"Amazon confirmed to us that these delays are directly related to the ongoing negotiations over conditions in the electronic book market," Schumacher-Gebler said.

In some cases, even the Web pages promoting the books have disappeared. Anne Rivers Siddons' new novel, "The Girls of August," coming in July, no longer has a page for the physical book or even the Kindle edition. Only the audio edition is still being sold (for more than $30).

The confrontations with the publishers are the biggest display of Amazon's dominance since it briefly stripped another publisher, Macmillan, of its "buy" buttons in 2010. It seems likely to encourage debate about the concentration of power by the retailer. No firm in U.S. history has exerted the control over the U.S. book market - physical, digital and secondhand - that Amazon does.

James Patterson, one of the country's best-selling writers, described the confrontation between Amazon and Hachette as "a war."

"Bookstores, libraries, authors, and books themselves are caught in the crossfire of an economic war," he wrote on Facebook. "If this is the new American way, then maybe it has to be changed - by law, if necessary - immediately, if not sooner."

Patterson's novels due to be released this summer and fall are now impossible to buy from Amazon in either print or digital form.

Hachette, which is owned by the French conglomerate Lagardere, was one of the publishers in the antitrust case, which involved e-book prices. But even before that, relations between the retailer and the publisher have been tense. Hachette made the case to Washington regulators in 2009 that Amazon was having a detrimental effect on publishing, but got nowhere.

For several months, Amazon has been quietly discouraging the sales of Hachette's physical books by several techniques - cutting the customer's discount so the book approached list price, taking weeks to ship the book, suggesting that prospective customers buy other books instead and increasing the discount for the Kindle version.

Amazon has millions of members in its Prime club, who get fast shipping. This was, as Internet wits quickly called it, the "UnPrime" approach.

The retailer's strategy seems to be to drive a wedge between the writers, who need Amazon sales to survive, and Hachette. But this does not seem to be working the way Amazon might want. Nina Laden, a children's book writer, was one of many Hachette authors lashing out at Amazon in the last week.

"I have supported Amazon for as long as Amazon has existed," she wrote in a Facebook posting she also sent to the retailer.

She went on to say that she was "frankly shocked and angry at what you are doing" to her new book, "Once Upon a Memory." "It has made me tell my readers to shop elsewhere - and they are and will," she wrote. (Amazon customer service wrote back, saying "We will be glad to investigate this issue further" if Laden would provide additional information.

One of the books made scarce by Amazon's actions is an updated edition of Brad Stone's "The Everything Store: Jeff Bezos and the Age of Amazon." The book revealed how Bezos said Amazon should approach vulnerable publishers "the way a cheetah would pursue a sickly gazelle."

"What irony," said Stone, a former reporter for The New York Times. "A book detailing Amazon's heavy-handed tactics in business negotiations becomes, at least in a small way, a victim of those tactics."