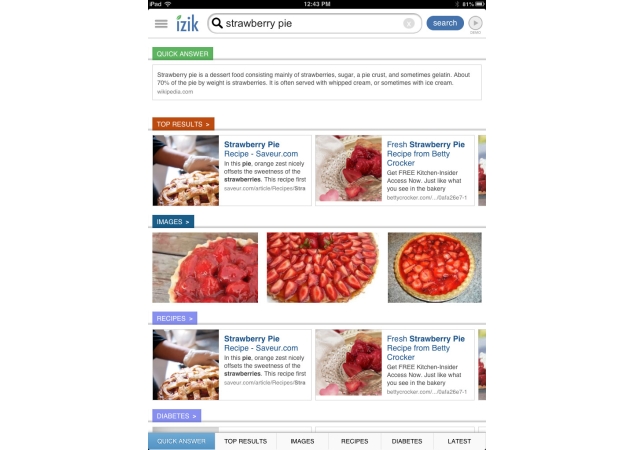 The makers of Blekko believe they've built a great alternative to Google, but they're also realistic. They know their two-year-old Internet search engine won't ever supplant Google as the most popular place to search on laptop and desktop computers.

But Web surfing on tablet computers is a different matter, creating an opportunity that Blekko hopes to exploit with a new product called Izik - a search engine designed especially for Apple Inc.'s iPads and tablets running Google's Android software.

Izik, whose name is a riff on 17th-century scientist Isaac Newton, debuted Friday with the release of free apps for the iPad and Android tablets.

To cater to the more visual format of tablets, Izik displays search results in rows of information capsules that can be easily scrolled with a swipe of a finger. Users scroll vertically to look at different categories related to a search request. Scrolling horizontally displays more capsules within each category, which vary depending on the request.

Blekko CEO and founder Rich Skrenta likens the experience to a hybrid service that is part search engine, part magazine and part discovery tool. Izik also shares some similarities to a tablet search app called Axis that longtime Google rival Yahoo Inc. released last May in an attempt to shake up the market. Like Izik, Axis also relies on visual thumbnails to list search results.

Izik's system is much different from Google's.

Entering "Apple" into Izik on Friday produced a set of results sorted into these easily navigable categories: "Top Results," "Images," ''Recipes," ''News," ''Reviews," and "Tech." Most of the information and pictures either pertained to Apple the company or the fruit.

Searching for the term at Google generated a map pinpointing the location of several nearby Apple stores. The rest of the results page was mostly devoted to a stack of blue links to other websites - a familiar format that has become the industry standard.

But Skrenta believes search will have to change as more people become tablet owners and start to use them more frequently than their laptop computers. With more than 100 million of the devices already sold since the iPad's April 2010 debut, tablets already have contributed to declining sales of traditional PCs and printers.

Skrenta is betting it's only a matter of time before the technological upheaval triggered by tablets hits the search market and people start to break their Googling habits.

Google so far has been able to extend its dominance to tablets, largely because its search engine is the built-in option on the iPad and most Android devices.

But the algorithms and format that Google uses on tablets and laptops are basically the same. Skrenta doubts Google will switch to a format as dramatically different as Izik's approach because it still makes most of its money from online advertising displayed on traditional PCs. The tendency to stick with a long-established product that is still bringing most of a company's money while challengers are introducing breakthroughs that threaten the status quo is sometimes referred to the "innovator's dilemma."

Blekko's namesake search engine also sought to address a problem that Skrenta didn't think was being adequately addressed by Google. By relying on humans to highlight the most useful information under frequently searched topics, Blekko, which is based in Redwood Shores, Calif., tries to remove the rogue websites that have learned to how to manipulate search formulas to gain a prominent ranking in search results.

Although Blekko began working on its technology five years ago, its search engine didn't debut until late 2010. About four months after that, Google unveiled sweeping changes to its search algorithm in an effort to reduce the rubbish showing up in its results.

Although its search engine has yet to undercut Google's dominance, Blekko has attracted a loyal following. It draws about 12 million monthly visitors and has raised about $50 million in venture capital from a group of investors that includes actor Ashton Kutcher and Yandex, a Russian search engine that is more popular in its home country than Google.