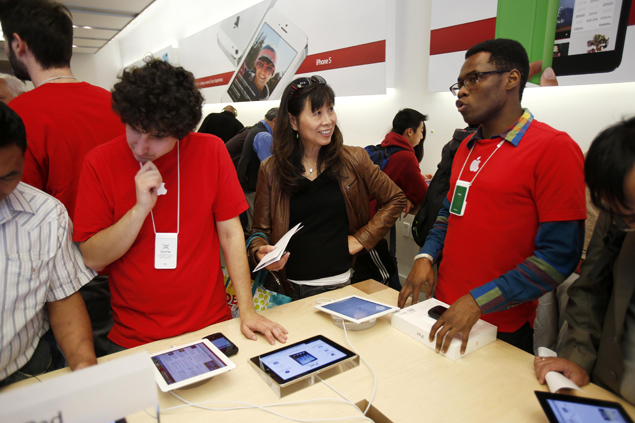 Black Friday retail sales online this year topped $1 billion for the first time ever as more consumers used the Internet do their early holiday shopping, comScore Inc said on Sunday.

Online sales jumped 26 percent on Black Friday to $1.04 billion from sales of $816 million on the corresponding day last year, according to comScore data.

Digital content and subscriptions, including e-books, digital music and video, was the fastest-growing retail category online, with sales up 29 percent versus Black Friday last year, according to comScore data.

E-commerce accounts for less than 10 percent of consumer spending in the United States. However, it is growing much faster than bricks-and-mortar retail as shoppers are lured by low prices, convenience, faster shipping and wide selection.

"Online has been around 9 percent of total holiday sales, but it could breach 10 percent for the first time this season," said Scot Wingo, chief executive of ChannelAdvisor, which helps merchants sell more on websites, including Amazon.com and eBay.com .

ComScore expects online retail spending to rise 17 percent to $43.4 billion through the whole holiday season. That is above the 15 percent increase last season and ahead of the retail industry's expectation for a 4.1 percent increase in overall spending this holiday.

Cyber Monday outlook
It's not clear yet whether strong Black Friday sales online will weaken growth on Cyber Monday, which has been the biggest e-commerce day in the United States in recent years.

"Cyber Monday will be a big day, but not as much of a big day as it has been in the past," said Mia Shernoff, executive vice president for Chase Paymentech, a payment-processing unit of J.P. Morgan Chase & Co. . "Faster broadband Internet connections in the office used to drive this. But now many consumers have faster connections at home and smart phones and tablets - they don't have to wait."

ComScore Chairman Gian Fulgoni said Cyber Monday online sales may reach $1.5 billion this year. That would be up 20 percent from the corresponding day last year - slower year-over-year growth than Thanksgiving and Black Friday.

More than 129 million Americans plan to shop online on Cyber Monday, up from almost 123 million on the same day last year, according to a survey conducted in recent days for the National Retail Federation.

The group also expects 85 percent of retailers to have a special promotion for Cyber Monday.

Amazon, the world's largest Internet retailer, will launch Cyber Monday deals at midnight on Sunday. The company is planning a limited time Cyber Monday promotion for its 7 inch Kindle Fire tablet, offering it at $129 instead of the regular $159, a spokesman said on Sunday.

Mobile devices accounted for 26 percent of visits to retail websites and 16 percent of purchases on Black Friday. That was up from 18.1 percent and 10.3 percent, respectively, on the same day last year, according to International Business Machines , which analyzes online traffic and transactions from 500 U.S. retailers.

More than 20 million shoppers plan to use mobile devices on Cyber Monday, up from 17.8 million a year ago, the NRF said.

Amazon and eBay
Amazon and eBay benefit from increased use of mobile devices for shopping because they are consistently the top two online retail destinations for mobile users, ChannelAdvisor's Wingo said.

Amazon.com was the most visited retail website on Black Friday, with more than 28 million visits, according to Hitwise.

Worth noting: eBay runs one of the largest online marketplaces, rather than being a retailer, so its online traffic was not reported by Hitwise. However, eBay said the volume of mobile transactions on its marketplace jumped 153 percent on Black Friday from a year earlier.

Price pressure
While mobile devices may be good for sales, they may not be so good for retail profit margins. Smart phones give shoppers real-time access to product prices online, potentially exacerbating the usual holiday discounting and price wars.

Black Friday online transactions jumped almost 30 percent, but the average ticket price was down more than 11 percent, according to Chase Paymentech, which reports data from its 50 largest e-commerce merchant clients.

"It's driving prices down," Shernoff said. "Consumers are checking prices in stores and showing the retailer, and the retailer will succumb to the lowest price online so they don't lose the consumer."