Launched in 2009 as the invention of a mysterious computer guru who goes by the pseudonym Satoshi Nakamoto, Bitcoins can be exchanged online for real money or used to buy goods and services on the Internet. The currency is not regulated by any government.

The currency traded at just $205 on October 28 and is known for its volatility.

Still, Bitcoin has gotten momentum in recent weeks after US regulators, including Federal Reserve Chairman Ben Bernanke, took a more positive view of the currency than many analysts had expected at a congressional hearing earlier this month. 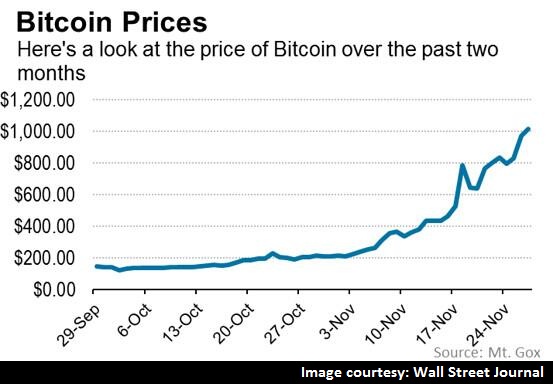 Regulators have also discussed stepping up oversight in light of concerns that it could be used for money laundering and other illicit purposes.

Bitcoins recently made headlines when the US Federal Bureau of Investigation closed the Silk Road website where illegal drugs, forged documents, hacker tools and even the services of hitmen were hawked. The FBI seized 26,000 Bitcoins worth $3.6 million at the time.