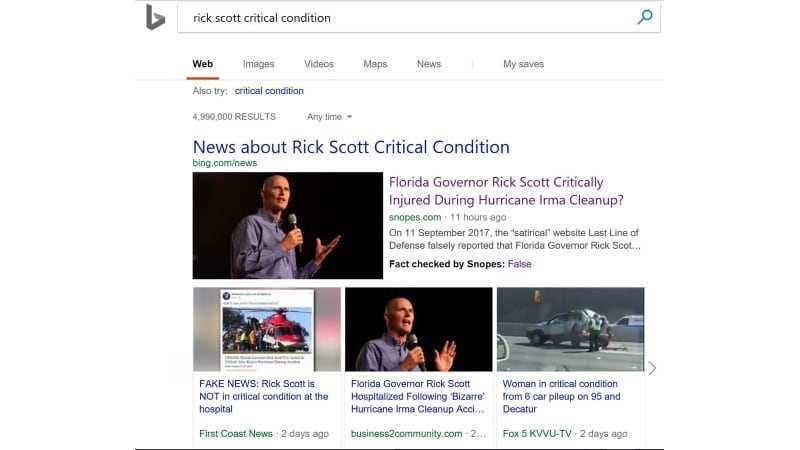 We live in times where fake news has been termed a crucial factor in deciding the fate of political campaigns the war against this malpractice has been going on for quite some time. After Google introduced its fact check feature last year, Microsoft's Bing search engine now shows similar notifications to users when they browse through the search results.

Microsoft Bing's newly introduced fact check feature essentially takes help from fact-checking websites to ensure that the facts mentioned in news stories are correct. Microsoft has shared the criteria required for the tag to appear in news stories. The Redmond-based company says that to use this label, the analysis must be transparent about sources and methods, with citations and references to primary sources included.

"Claims and claim checks must be easily identified within the body of fact-check content. Readers should be able to determine and understand what was checked and what conclusions were reached," it added.

Microsoft said in its blog about the feature that Bing determines whether an article might contain fact checks by looking for the schema.org ClaimReview markup. "In addition to the ClaimReview markup being contained on page, Bing also looks for sites that follow commonly accepted criteria for fact checks including of third-party fact checking organizations," it said.

The company said that it will take the reputation of the website and other factors into consideration before deciding if the label should show up or not. As the news stories shared on social media have become one of the primary source of news consumption, this feature is likely to prove crucial if implemented properly.