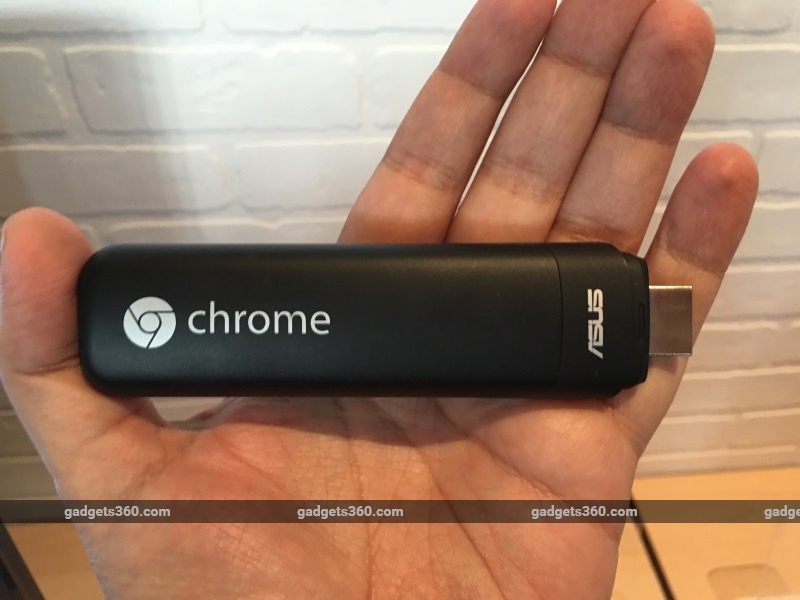 At the Google for India event in New Delhi on Wednesday, Google announced that the Asus Chromebit, a pocket computer that runs Chrome OS, will be launched in the country in January at a price point of Rs. 7,999.

Unveiled earlier this year, the Asus Chromebit went on sale in some regions last month. At the event, which was spearheaded by company's CEO Sundar Pichai, Google unveiled the product and said that it will be available for purchase in India in January 2016.

The Asus Chromebit, which looks similar to the Intel Compute Stick, is powered by Rockchip's RK3288 quad-core SoC and 2GB of RAM, coupled with 16GB of inbuilt memory. On the software front, it runs Chrome OS. It was launched globally at a price point of $85 (roughly Rs. 5,700). On the connectivity front, there is a USB 2.0 port, and the Chromebit supports Bluetooth 4.0. There's no memory card slot should you want to expand the storage.

The device can be plugged into a "dumb" monitor or a TV and turn it into a smart device. You can browse Web on it, run applications, edit your documents, and watch movies. Two new Asus Chromebooks will also be launched in India soon, but no other details were provided.

Google's Chrome OS, for those unfamiliar, is a desktop operating system that is largely built around Chrome Web browser. In the past few months, however, the company has added features such support for offline media playback, and a handful of Android apps to make the operating system more capable.

The Asus Chromebit is Google's attempt to enter the miniature computer market. The Chromebit will be competing against the likes of Intel Compute Stick, which is already available in India at a price point of around Rs. 9,000. We've seen a number of other players jump to the market as well, such as InFocus, which announced the Kangaroo PC recently.