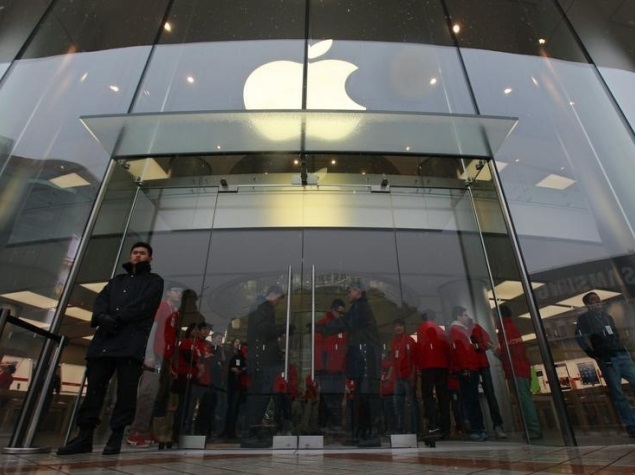 Apple Inc has begun keeping the personal data of some Chinese users on servers in mainland China, marking the first time the tech giant is storing user data on Chinese soil.

The storage of user data in China represents a departure from the policies of some technology companies, notably Google Inc, which has long refused to build data centres in China due to censorship and privacy concerns.

Apple said the move was part of an effort to improve the speed and reliability of its iCloud service, which lets users store pictures, e-mail and other data. Positioning data centres as close to customers as possible means faster service.

The data will be kept on servers provided by China Telecom Corp Ltd, the country's third-largest wireless carrier, Apple said in a statement on Friday.

"Apple takes user security and privacy very seriously," it said. "We have added China Telecom to our list of data centre providers to increase bandwidth and improve performance for our customers in mainland china. All data stored with our providers is encrypted. China Telecom does not have access to the content."

A source with knowledge of the situation said the encryption keys for Apple's data on China Telecom servers would be stored offshore and not made available to China Telecom.

Apple has said it has devised encryption systems for services such as iMessage that even Apple itself cannot unlock. But some experts expressed scepticism that Apple would be able to withhold user data in the event of a government request.

"If they're making out that the data is protected and secure that's a little disingenuous because if they want to operate a business here, that'd have to comply with demands from the authorities," said Jeremy Goldkorn, director of Danwei.com, a research firm focused on Chinese media, internet and consumers.

"On the other hand if they don't store Chinese user data on a Chinese server they're basically risking a crackdown from the authorities."

Goldkorn added that data stored in the United States is subject to similar U.S. regulations where the government can use court orders to demand private data.

Google, Microsoft
With its rising middle class, China has become an increasingly important market for Apple. Sales of the iPhone rose almost 50 percent in China in the three months ended June and salvaged an otherwise lackluster quarter for the Cupertino company.

Other companies have opted not to situate servers in China, where they would have to comply with local laws.

Google publicly abandoned China in 2010 and moved its services, including its search engine, to Hong Kong-based servers after refusing to comply with Chinese government censorship. Microsoft Corp also does not have servers for its email service in China.

Yahoo Inc came under criticism in 2005 after it handed to Chinese authorities emails that led to the imprisonment of Shi Tao, a journalist who obtained and leaked an internal censorship order the government had sent Chinese media.

"China doesn't want any digital service offered to Chinese people to be hosted offshore," said Goldkorn. "I suppose it was inevitable that Apple had to comply if they were using foreign servers for Chinese user data."

In July, Apple's iPhone was branded a danger to China's national security by state media, because of the smartphone's ability to track and time-stamp user locations. Apple denied tracking user locations.

Apple has frequently come under fire from Chinese state media, which accused the company of providing user data to U.S. intelligence agencies and have called for 'severe punishment'.

The U.S. company has strongly denied working with any government agencies to create back doors into its products or servers. "We have also never allowed access to our servers. And we never will," Apple has previously stated.

News of the China Telecom deal emerged Thursday after a local government website in the southeastern province of Fujian announced that iCloud had migrated to China Telecom's servers after 15 months of rigorous testing and review. The website article is no longer available on the site.