Amazon is exploring the use of giant airships to serve as mobile, flying warehouses that could help the online retail giant deliver more of its goods by drone.

You might already be familiar with Amazon's drone delivery service, which recently received a demo in the United Kingdom for the first time. But the idea for a fleet of large airships, disclosed in filings to the US Patent and Trademark Office, expand on those ambitions dramatically. (Amazon chief executive Jeffrey P. Bezos also owns The Washington Post.)

Imagine you're at a baseball game and wanted to buy a meal or a jersey without ever leaving your seat. The system Amazon describes would allow you to place an order and receive the item within minutes. From its so-called "airborne fulfillment centers" hovering near the stadium, Amazon would dispatch a drone with your purchase. The drone would float or glide most of the way, then turn on its propellers and navigate itself to you directly.

While Amazon's existing goal with drone delivery is to get you your stuff within 30 minutes, airships could potentially reduce that time even further. Unlike Amazon's land-based warehouses, which by definition can't move around, airborne fulfillment centers could respond to surges in demand even before they occur, according to the patent filing.

Large gatherings of people for a specific event, such as a concert or a sports game, are one example Amazon highlights as a clear-use case. But Amazon also appears to believe that using airships could reduce the costs of drone delivery in general.

In looking to airships, Amazon draws upon a long technological tradition dating back to the 19th century, when some of the world's first self-propelled dirigibles were created.

Sending drones out from a ground-based facility requires substantial energy, the filing says, because the drone must have its propellers spinning constantly to stay aloft. What's more, having to make a return trip to the warehouse with no payload onboard could be a wasteful expense. By contrast, Amazon believes it could be more efficient to deploy drones from airships; the drones could float or glide most of the way down to earth by way of gravity, rather than using their own power.

The airships would have to be resupplied periodically, of course. Amazon envisions still more airships - smaller ones - that could shuttle more drones, products and other things needed to keep the airships functioning up to the larger carrier.

A diagram from Amazon's patent filing that shows how the whole system could work. 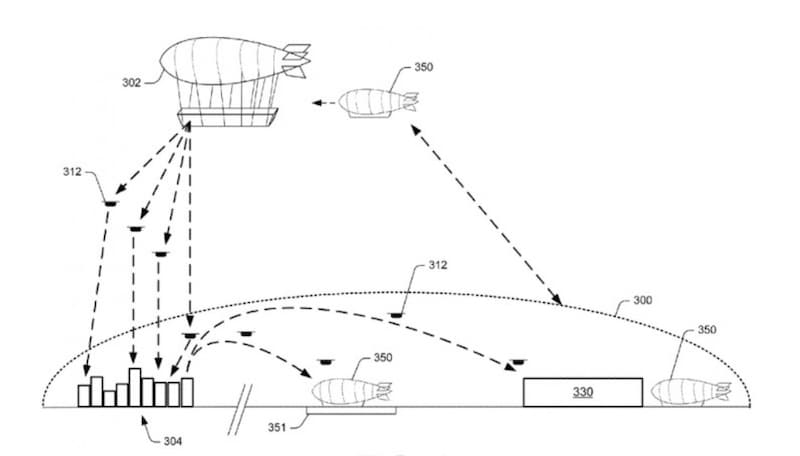 There's no word on when such a system might debut; an Amazon spokesperson didn't immediately respond to a request for comment. Some patents never even lead to actual products. But companies such as Facebook and Google have floated the use of airships and drones to beam Internet connectivity down to earth, so it was likely only a matter of time before Amazon began thinking about how to apply the same technology to its business.