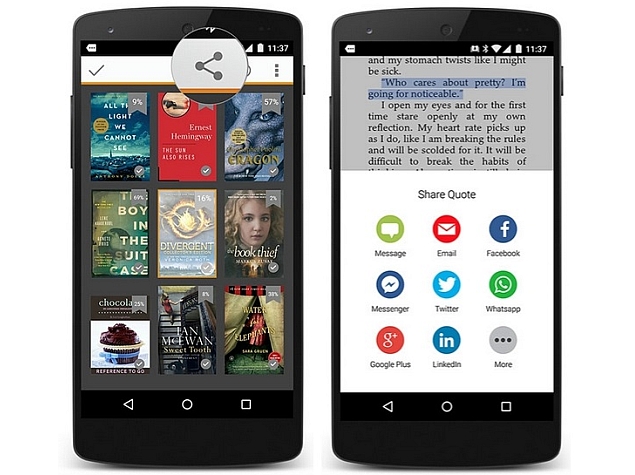 Amazon on Wednesday announced a new feature called 'Instant Previews' for Kindle users to easily share more information about their favourite books with their friends.

Using the new feature, Amazon Kindle users can share book quotes and recommendations with friends across various social platforms including Facebook, Twitter, Google+, WhatsApp, and others, more easily than before. The firm says that while Kindle users already had the ability to perform the same functions via Twitter and Facebook, the Instant Previews lets them "start a conversation" with individual people.

Also, users who receive the quotes and book recommendations will be able to read the previews of the book directly from the phone or any other device, without installing the app or signing-up. Amazon has however made it clear that its 'Instant Preview' feature is only limited to Kindle for Android for now, and will reach Kindle ebook readers and other devices later this year.

"The perfect quote in a book isn't always the perfect quote for your whole social network. Now it's easy to share exactly what you want in a Kindle book with exactly who you want," said Russ Grandinetti, Senior Vice President, Kindle. "Kindle makes it easy to chat about the books you're reading, whether it's making a recommendation or sparking a conversation about a quote you loved. And friends who receive the share can instantly start reading a free sample of the book-no sign-up, no sign-in, and no app to install," he added.

Earlier this week, Amazon announced that it would pay independent authors based on the number of pages read, rather than the number of times their book has been borrowed. This particular step is supposed to better align payout with the length of books and how much customers read.