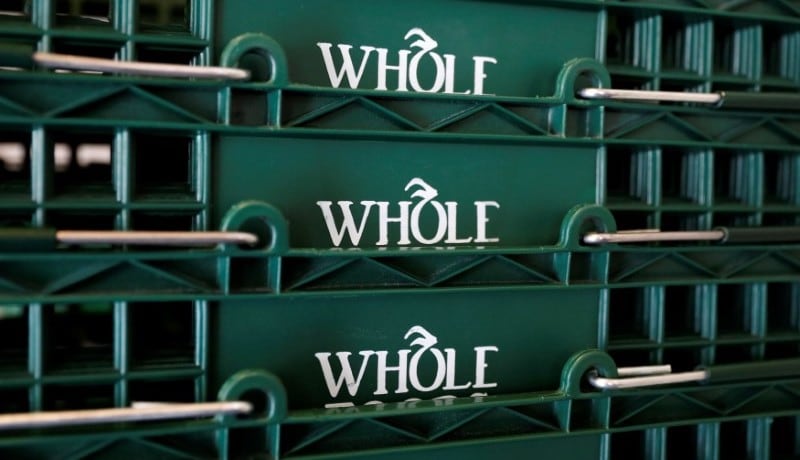 On its first day as part of Amazon, organic grocery chain Whole Foods Market slashed prices on popular items like avocados and apples on Monday by a third as it bid to shake off its "Whole Paycheck" reputation for high prices.

In another sign of changes to come, a display offering Amazon's Echo and smaller Echo Dot hands-free smart speakers for $99.99 (roughly Rs. 6,400) and $44.99, respectively, was nestled amid the colourful produce at the Whole Foods in downtown Los Angeles. Those gadgets sell for the same price on Amazon.com.

The companies signalled last week that they would selectively cut Whole Foods prices starting on Monday, and promised more discounts in the future.

And, shares in those food sellers have fallen on worries that Amazon could disrupt the grocery business in the same way it did with books and electronics.

Signs posted in Whole Foods' 450 US stores trumpeted the changes.

Price cuts varied slightly from city to city. For example, a Whole Foods in Chicago's West Loop reduced organic avocado prices by 20 percent, while Bloomberg reported that a Manhattan store chopped the price on organic Fuji apples by 43 percent.

The downtown Los Angeles Whole Foods prices, in some cases, were lower than those at a nearby Ralphs grocery store owned by Kroger, which competes aggressively on price.

Ralphs was selling conventional avocados for $1.99, versus $1.49 at Whole Foods. Conventionally grown bananas were also priced higher at Ralphs: 59 cents a pound, against 49 cents at Whole Foods.

Some analysts estimate that Whole Foods would have to cut prices by 10 to 15 percent overall to truly compete with other food sellers.

Nevertheless, its surgical paring of prices on popular staples could force other retailers to follow. That would only add pressure on those retailers, who already were preparing for another step down in prices as German discounters Aldi and Lidl expand in the United States and intensify the price war historically led by Wal-Mart.

Shazneen Gandhi, 41, in Los Angeles said the Amazon-Whole Foods merger is a frequent topic of conversation among her friends and fellow mothers.

Cynthia Von Weiss, 62, groused about the "ridiculous" high price for chicken salad as she shopped at the West Loop Whole Foods and said the store would have to aggressively compete with local grocers to win her loyalty.

"We'll see what happens ... If I could come in here and spend something comparable to Mariano's or Jewel, or ideally Trader Joe's, then they got a customer for life," she said. Mariano's is owned by Kroger and Jewel is owned by Albertsons Cos.

As part of Amazon's putting its stamp on the grocer, Whole Foods stores displayed promotions for Amazon's Echo speaker in tongue-in-cheek fashion, with signs reading "Farm Fresh" and "Pick of the Season."

The Echo plays a critical role in Amazon's burgeoning ambitions to popularise and dominate the market for voice-controlled computing.

Sprouts was the hardest hit of the food sellers. Its shares tumbled 9.8 percent on Monday, compared with the 2.7 percent drop for Supervalu and the less than 1 percent decline for the remainder of the group.