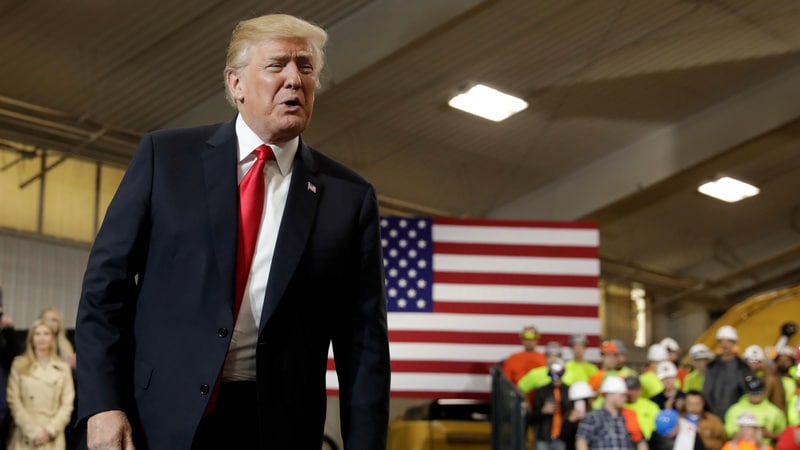 President Donald Trump lit into Amazon.com for the second time in three days with a pair of Twitter messages that said the online retailer "must pay real costs (and taxes) now!"

The president on Saturday claimed, citing reports he didn't specify, that the US Postal Service "will lose $1.50 (roughly Rs. 98) on average for each package it delivers for Amazon" and added that the "Post Office scam must stop." Amazon has said the postal service, which has financial problems stretching back for years, makes money on its deliveries.

Amazon shed $53 billion (roughly Rs. 3.44 lakh crores) in market value on Wednesday after Axios reported that the president is "obsessed" with regulating the e-commerce giant, whose founder and chief executive officer, Jeff Bezos, also owns the Washington Post newspaper. Those losses were pared on Thursday, the final day of a shortened trading week, even as Trump tweeted that Amazon was using the postal service as its "Delivery Boy."

White House spokeswoman Lindsay Walters said on Thursday that while the president was displeased with the e-commerce giant, and particularly instances where third-party sellers on the site didn't collect sales tax, there were no administrative actions planned against Amazon "at this time."

Still, Brad Parscale, who's managing Trump's 2020 presidential campaign, hinted in a tweet late Thursday that the administration may act to raise Amazon's postal costs. "Once the market figures out that a single @usps rule change will crush @amazon's bottom line we will see," Parscale wrote.

Amazon.com and the Washington Post have been regular punching bags for Trump. In July, the president mused about whether the newspaper was "being used as a lobbyist weapon" to keep Congress from looking into Amazon's business practices. He echoed that comment on Saturday, saying the Post "is used as a 'lobbyist' and should so REGISTER."

Trump is spending Easter Weekend at his resort in Palm Beach, Florida, and arrived at the nearby Trump International Golf Club early Saturday, just after the tweets were published. He also criticized Amazon over Twitter during his winter vacation at Mar-a-Lago, saying in December that the postal service "should be charging MUCH MORE for package delivery."

Amazon regularly uses the USPS to complete what's called the "last mile" of delivery, with letter carriers dropping off packages at some 150 million residences and businesses daily. It has a network of more than 20 "sort centres" where customer packages are sorted by zip code, stacked on pallets and delivered to post offices for the final leg of delivery.

While full details of the agreement between Amazon and the US Postal Service are unknown - the mail carrier is independently operated, and strikes confidential deals with retailers - David Vernon, an analyst at Bernstein Research who tracks the shipping industry, estimated in 2015 that the USPS handled 40 percent of Amazon's volume the previous year. He estimated at the time that Amazon pays the postal service $2 per package, which is about half what it would pay UPS or FedEx.

A sudden increase in postal rates would cost Amazon about $2.6 billion a year, according to a report by Citigroup from April 2017. That report predicted United Parcel Service and FedEx would also raise rates in response to a postal service hike.

Citigroup also said that the "true" cost of shipping packages for the USPS is about 50 percent higher than its current rates, leading some editorial writers to conclude that Amazon was receiving the type of subsidy cited in Trump's Thursday tweet.

But the postal service's losses have little to do with Amazon and more to do with its large health-care obligations and the dwindling use of first-class mail. The post office charges some of the world's lowest stamp prices.

"The Postal Regulatory Commission has consistently found that Amazon's contracts with the USPS are profitable," the company said in the statement. "Amazon has invested hundreds of millions of dollars in a network of more than 20 package sortation facilities that inject directly into the USPS last mile network bypassing most of USPS network. This investment resulted in more efficient processes as well as thousands of jobs and related economic benefits in local communities."

The president's tweet also assumes that Amazon would be forced to pay if the Postal Service increased its rates for packages. But Amazon has been setting up its own shipping operations in the US and elsewhere in the world to minimize costs.

Under a new service being rolled out this year, Amazon would oversee the pickup of packages from warehouses of third-party merchants and delivery to home addresses.