With the launch of the four new languages, Amazon is now offering online shopping in India in six distinct languages.

Amazon on Tuesday expanded Indic language support in India by adding four new languages – Kannada, Malayalam, Tamil, and Telugu. The language expansion is aimed to help the e-commerce giant expand its online shopping experience and grow its customer base in the country. The latest development comes a little over two years after Amazon brought Hindi language support to its online marketplace. Customers can check out the language expansion directly through their mobile devices or using a desktop.

With the launch of the four new languages, Amazon now offers six distinct languages in India – English, Hindi, Kannada, Malayalam, Tamil, and Telugu. Customers can select their preferred language from the Amazon app on their Android or iOS devices or through the mobile or desktop site.

Kishore Thota, Amazon India's director of customer experience and marketing, told Gadgets 360 over a phone call that the new language expansion came from a team of in-house linguists for each of the supported languages who helped translate and convert various elements on the platform.

“It's not really about just taking a text and converting it,” Thota said. “So, they [linguists] play a very important role in matching the colloquial part of which elements to convert as well as what to convert it to.” 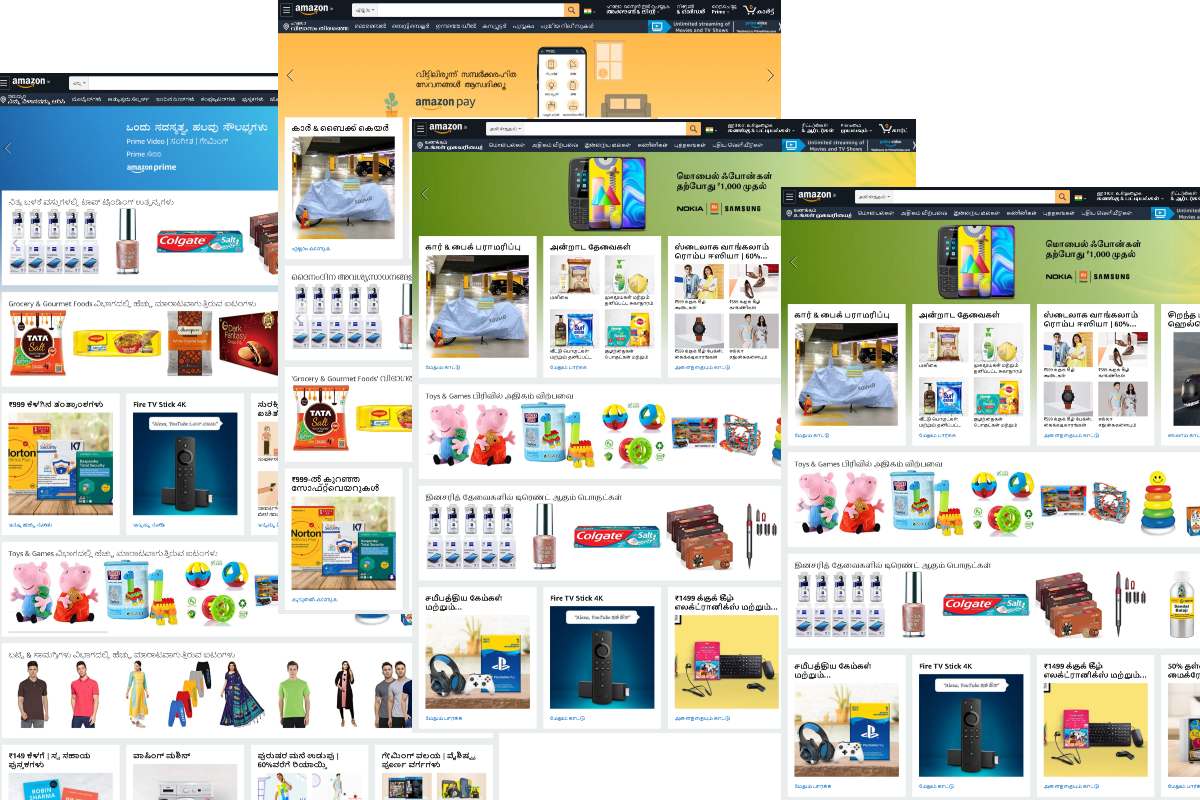 The team of linguists picked commonly used terms over perfectly translated words to facilitate easier understanding among customers. Amazon also said in a statement that customers would find the most common words that are used in their daily lives on the platform in all six languages.

The launch of Hindi language support helped Amazon bring in the new languages. Thota said that the team had learnt a lot from the initial rollout in terms of what works for customers, which fields to convert, what colloquial language to use, and figure out which things should remain in English and which ones needed to be translated into an Indic language.

Amazon also saw a three-time spike in the adoption of Hindi language in the past five months. Without offering any specific numbers, the company said that thousands of Amazon customers from tier 1, tier 2, and tier 3 cities across Bihar, Chhattisgarh, Himachal Pradesh, Jharkhand, Maharashtra, Punjab, Rajasthan, Telangana, and Uttar Pradesh have switched to the Hindi shopping experience since its launch in 2018.

Thota underlined that while Hindi support was initially limited in nature, the new launch would see two times larger coverage than what Amazon had brought in for Hindi. This means that you should be able to see the new Indic languages appear on more elements than those featuring Hindi earlier.

On why Amazon particularly chose Kannada, Malayalam, Tamil, and Telugu, Thota told Gadgets 360 that it was all due to customer demand. “We continue to look at general customer demand,” he said. “It's a journey in terms of what languages to cover and how many to cover at a certain point, and these we believe would form a good suite of new languages to introduce at this point.”

The launch of the four new languages on Amazon comes nearly three months after Flipkart brought support for Kannada, Tamil, and Telugu to its platform. It also arrives just ahead of the festive season in which both Amazon and Flipkart try to expand their reach as well as widen their sales by attracting new customers.