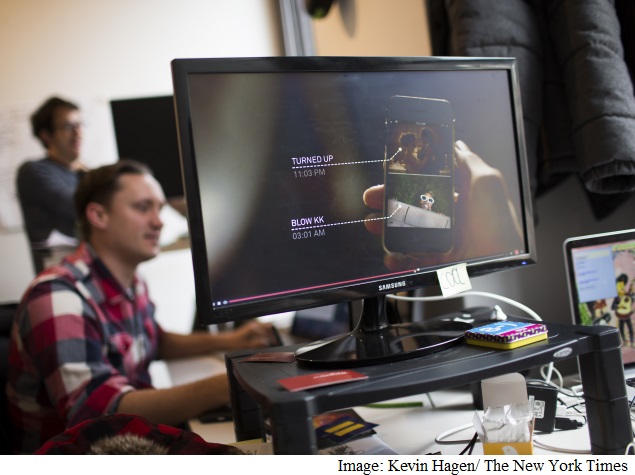 Five years ago Yoni Bloch, an Israeli rock star, wanted to make a music video that would let viewers choose what happened as the story unfolded. But the technology did not exist, so Bloch and his band members developed it themselves and shot the video for $2,000.

That technology is now the basis for Interlude, a company Bloch helped start in 2010 that has joined the ranks of YouTube's challengers. It also led to a new joint venture with the Warner Music Group, home of stars like Coldplay and Bruno Mars, called Interlude Music.

"We thought no one was doing it the way it should be done," Bloch, 33, said last week at the company's office in Manhattan. "Our basic idea was that instead of building one curated ride, we would let creators build a playground and let other people do it."

The basic format of Interlude's videos will be familiar to anyone who grew up on the "Choose Your Own Adventure" book series. As the film plays, a viewer is prompted with questions about how to proceed - wear the black dress or the white one? - and the video seamlessly integrates each choice.

The company is one of many challenging YouTube's dominance of online video. Vessel, started by two former Hulu executives, recently revealed a plan to offer $3 subscriptions for early access to short videos. And in September, the Universal Music Group made a deal with Mirriad, a company that specializes in inserting new ads into old videos.

Interlude's success against a giant like YouTube - which is owned by Google and attracts more than a billion viewers each month - is by no means guaranteed. But it has already had some promising hits.

Last year an Interlude video of Bob Dylan's "Like a Rolling Stone," which let viewers flip through a fictional TV wasteland - infomercials, game shows - in which actors mouthed Dylan's lyrics, got more than 70 million views. Recently, an interactive video for "Stayin Out All Night" by rapper Wiz Khalifa, a Warner artist, was viewed 3.8 million times, while a conventional version on YouTube got only 3.6 million views.

"This Interlude technology is game-changing," Khalifa said in a statement. "I'm very glad to be at the forefront."

For Warner, as well as for advertisers that have begun to use Interlude, the appeal of the technology lies in how it lures people to be more active viewers. According to Bloch, the company's chief executive, 90 percent of Interlude's music video viewers make choices while watching (videos will play even if a viewer does nothing).

A more engaged audience yields higher ad rates, and Interlude's narrative mazes also offer ways for producers to incorporate brands (for a fee, of course). In one illustration cited by Robert S. Wiesenthal, Warner Music's chief operating officer, the viewer of a rap video could choose to have the star keep dancing at a party or hop into a BMW.

"We are all on this hunt for monetization," Wiesenthal said. "When someone makes a choice to learn about something, that is worth more than, say, a passive pre-roll ad or a guy just holding a bottle of Scotch in his hands."

For record labels, such efforts can help wring more money from music videos, which are crucial for promotion but usually yield disappointing royalties. According to the Recording Industry Association of America, labels earned just $220 million (roughly Rs. 1,389 crores) last year from ad-supported sites like YouTube and Vevo that let viewers choose what songs they watch or listen to.

In person, Bloch seems an unlikely technology guru, making self-deprecating jokes and playing down his own success in music. (He was a judge on "Kokhav Nolad," the Israeli version of "American Idol.")

His company shares an office with S-Curve Records, an independent label whose founder, Steve Greenberg, introduced Interlude to the American music world in 2010 through an eye-catching interactive video by an S-Curve artist, Andy Grammer. After that, Bloch said, the venture capitalists of Silicon Valley came calling.

"All kinds of VCs called us," Bloch said, "but we didn't really know what a VC is."

Interlude raised $19 million (roughly Rs. 120 crores) in financing and now has 60 employees in New York, Los Angeles and Tel Aviv. In addition to its partnership with Warner, it has another joint venture with WPP, the global advertising giant.

After scanning through some of the videos his company has produced with superstar artists like Coldplay, Bloch laughed and recalled the interactive video he used to propose to his wife.

Android One Initiative Expands to Bangladesh, Nepal, and Sri Lanka
How to Backup Amazon Kindle Ebooks