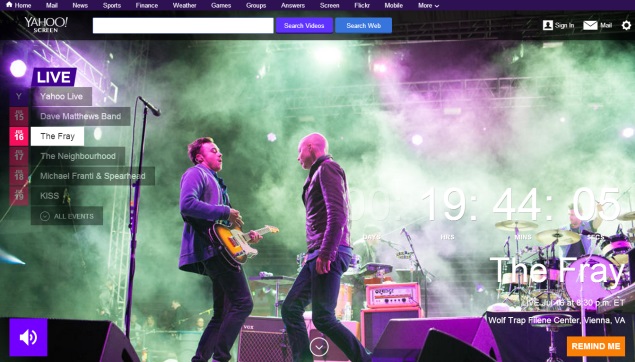 Yahoo's hopes for renewed stardom on the Internet stage are being pinned on a song.

Make that many songs performed by popular musicians in real time, and streamed daily at yahoo.com/live beginning with a concert Tuesday by The Dave Matthews Band.

In what analysts see as a bold move by Yahoo chief Marissa Mayer, the faded Internet search pioneer is betting on live music as part of its shift to premier online content, which has also included recruiting news, music and television stars for online magazines focused on technology, film and food.

The Dave Matthews Band kicked off a year of daily free streaming concerts on a Live Nation Channel on Yahoo Screen. Upcoming acts will include Usher, Michael Franti, John Legend, and Justin Timberlake.

A Yahoo page for two music sets by DMB featured links for buying digital downloads of songs or tickets to upcoming concerts.

Yahoo magazine pieces on DMB music videos or scenic places to see the band perform were teased, along with posts at Yahoo-owned Tumblr.

In what could have been a sign of heavy traffic, connecting to the show took repeated tries, with messages popping up to say "oops" something went wrong.

Chatter on Twitter indicated that while some people had to persevere, viewers were getting through. Yahoo did not return a request to find out how many folks were watching online.

"Finally got it up and running," a Twitter user chirped. "Way to give me a major heart attack @ Yahoo."

Radio for the 'Interweb'
Matthews joked with the enthusiastic audience that any mistakes during the show were absolutely intentional to enhance the "realness" of the performance.

"Somebody told me that this particular evening is being shown on the Interweb," Matthews quipped during the second of two sets. "So, I sure hope it doesn't suck."

Fans at the venue tweeted pictures from the audience, while others watching online crowed on Twitter of dancing in living rooms or delighting in enjoying the show from comfy couches with no queues at bathrooms.

Home viewing had the down side of pauses for video buffering that grew more frequent as the performance went on.

"This live stream is amazing," a Twitter user with the handle Kwayne115 said. "Loving this."

"Music is at the heart of so many people's lives and the concert experience is very important," Bajarin said.

"This could be very important to Marissa's overall strategy to grow Yahoo's user base."

Yahoo hasn't revealed details of how it plans to make money off streamed concerts beyond airing ads.

Live, online concerts should compete well for limited time people have to spend on entertainment, according to Bajarin.

"Yahoo is playing the role of the Top 50 radio station of the past, and Live Nation is funneling talent in," the analyst said. "If I am a band, I am probably beating on their door to get in on this."

Big acts will likely draw devoted fans to Yahoo's venue. Musicians will get the promise of new listeners who may spend money on albums, concerts or other offerings from artists.

"People say that content is king, and it really still is," Forrester analyst James McQuivey said. "Much of it is interchangeable, but when it comes to something unique like the World Cup or the Oscars, you can focus people's attention."

Uphill battle
While there is solid logic to Yahoo's music move, it is unlikely to turn the company around, according to McQuivey.

With people increasingly using smartphones or tablets to go online, squeezing revenue from mobile devices has proven challenging for many companies, Yahoo included.

"The idea that Yahoo is going to be much more of a broad network that not only does traditional programming but does associated activities like streaming is consistent with their strategy," said analyst Rob Enderle of Enderle Group in Silicon Valley.

"I'm just not sure it is going to work. It just seems like a very uphill battle for Yahoo."

While Yahoo CEO Mayer proved her talents as an engineer and executive at Google she has no background in television or music and Yahoo is facing fierce competition in the online entertainment space from companies such as Amazon and Netflix, which have begun producing their own original programming.

"While the re-invention of our video business is still in its early days, I am heartened," Mayer said Tuesday during an earnings call.