Last year, Google and Flipkart partnered to introduce the world to a new kind of an app. This app works inside your mobile browser, but provides a richer experience of the sort usually associated with native apps, such as the ability to send users notifications even when the browser is closed. Perhaps the biggest benefit of Flipkart Lite, and other similar apps, is that they work offline as well.

Since then, many other companies have moved their mobile Web experience to Progressive Web Apps, or PWA, as these apps/ websites have now come to be known. Gadgets 360 spoke to Anuvrat Rao, Global Product Partnerships, Search, Chrome and Integrations, to see how far Google’s Progressive Web Apps have progressed since launch.

“We are seeing good momentum in India, in particular, the real estate space, we are seeing PWAs come out,” says Rao. “PropTiger is working on this right now, MagicBricks has actually put out a press release as well recently on this, Housing.com has launched a PWA - all three are performing pretty well - and the companies are really happy with the metrics they are seeing. We are seeing travel space, you have Goibibo there, MakeMyTrip is working on it, and we are seeing publishing space as well. Aajtak is a good example of a PWA that launched, which is an Indic language PWA."

With no app to install, Rao believes PWAs are tailor-made for low-end devices, which account for bulk of smartphone sales in India.

"One of the main things about progressive Web is that when you talk about countries like India, where people have intermittent connectivity, people will have low-end phones [where] space is a concern, then the Web is a good model because then you are not taking any space on the phone,” says Rao. “Yet, on a low-end phone, I want to give a really good experience, and if you can build that on the Web, that's great, because you [take operating system out of the picture]."

Why PWA?
If you are running a business, it’s likely that your developers already have their hands full with mobile and desktop versions of the website; native apps for iOS, Android, and possibly other platforms; not to mention the middleware that glues everything together. Is developing for yet another platform something CTOs really want on their to-do list? We spoke to Vivek Jain, Chief Product and Technology Officer, Housing.com, a real-estate company that recently launched its PWA, to understand the company’s motivation behind the move.

"What we have seen and I think a lot of digital companies will agree with this is that while the app really solves the user engagement problem very well, but the discovery problem is not that well solved, that is better solved with the browser,” says Jain. “For example, the cost of getting a customer onto a mobile website - whether through search, for social, or display - is substantially lower on mobile Web, compared to driving a download on a smartphone." 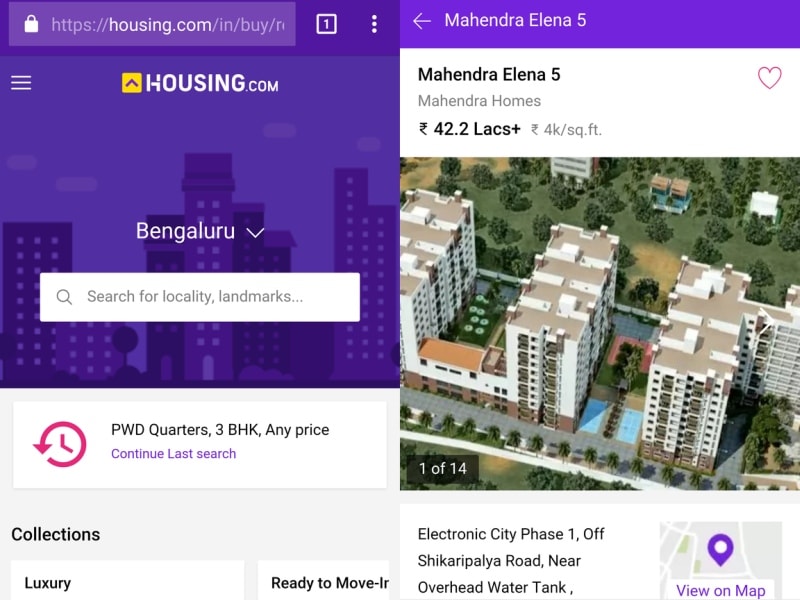 "Clearly, we were looking for a solution which can merge the benefits of both, where we can have a lower cost of discovery, at the same time, high engagement, and I think PWA does a great job in achieving that, and that's the primary reason we jumped on to this technology," he adds.

So does Jain foresee a future where the Progressive Web App becomes the main platform for Housing.com, possible even doing away with native mobile apps?

"It's too early for us to do away with the app. We will continue to support both, for a lot of low-end smartphones, entry-level smartphones, where people have lesser memory in a lot of tier-2, tier-3 cities, where data connectivity speeds are slow, in all those areas it makes sense for people to just use a mobile browser, and get all the benefits, be it engagement via personalised notifications, or offline access,” he says. “But on the other side, are customers who have access to high bandwidth and have good smartphones with reasonable memory and computation capacity, then definitely app is still, even today, a slightly better experience."

Jain points out, correctly, that people with limited storage on their smartphones are unlikely to try out many apps, and a real estate portal will definitely not be very high on their list of apps to install.

PWA in the real world
"The early data that we have suggests that performance, which is one of the key metrics, page load time, we are expecting to improve by 30 percent, and if we look on the output metric, we believe, user engagement will improve by 10 percent,” explains Jain. “For real estate sector, for us, the most important metric is, conversion - lot of traffic comes to our website, but how much of this engages, interacts, and eventually fills the form and becomes a lead. So the lead conversion, we expect should grow by 30 percent."

So how easy is to get started with PWA development? And how much of an effort does it take?

"Overall it took us about three months - one month of analysis, and two months of serious, full-time development by three developers,” says Jain, numbers that are in line with what Flipkart shared with Gadgets 360 last year. Jain points to Google’s “very well documented guidelines for PWA” as a useful resource that helped speed-up the development process.

Internationally, publications like the Washington Post have reported great success with their PWA, and Accelerated Mobile Pages, or AMP, Google’s other big push for making the mobile Web experience faster.

(Also see: Everything You Need to Know About AMP)

“[Washington Post] is putting out about 1000 AMP pages every day,” says Rao, “they have a load time on their AMP pages of less than 400 milliseconds, which is pretty great, and 88 percent faster than what they had before. What they are really seeing is that their retention rates have started going up because of that. They are seeing like a 23 percent increase in retention because users are coming through AMP pages."

Washington Post clearly believes that AMP and PWA are the way forward for the mobile Web, for the immediate future at least, and Housing.com’s Jain agrees.

"We are very excited about all the things that Google is doing to make the end to end journey on mobile Web extremely smooth,” he says. ”So, the next big thing I'm looking forward to is of course AMP. The customer arrives on to your news pages, through which we do marketing, if that load time is reduced [thanks to AMP], and then PWA makes the engagement better, and once Google opens up its login credentials, then the entire lead conversion process - the end to end cycle, once all the three pieces are solved, login credentials, AMP, and PWA - that's when I think we will [see] overall improvements in our metrics. So we are looking forward to the other two launches from Google."

Google’s Rao sums up how the the two technologies complement each other: “AMP is a way to start fast, and PWA is a way to stay fast and stay engaged."

But not everyone is convinced. One of the CTOs we spoke to, who wished to remain anonymous, had concerns about the SEO impact of Progress Web Apps, citing conflicting signals from various Google representatives the company had spoken to. Besides, PWA isn’t truly cross-platform just yet, with features like notifications and offline mode not fully supported on Apple’s Safari. The messaging from Mountain View could certainly be clearer when it comes to helping out companies in terms of where they should be directing their development resources.

"Our answer is - ‘what is important to you?’,” says Rao “Normally what we say is - do you currently have a mobile site, or an app, how do you see the two going [forward]? In some cases, the mobile site is more important, so how do we make that a great experience - AMP and PWA come into play there. If the app is important and there's a lot of effort going in the app, then it makes sense to make that better."

One problem with that approach is companies may not know the benefits of Progress Web Apps until they actually build one, and while the development effort may not be huge for relatively well-established companies like Flipkart and Housing.com, the same cannot be said for a two-member team just starting out, wondering what platforms to focus their energy on.

Rao believes a PWA combines the best of both worlds - Web and apps - for a country like India.

“[PWA] addresses a lot of problems that people have here - the uninstallation issue of apps, the fact that there's low connectivity, the fact that affordability is a challenge,” he explains. “[With] PWA you don't need to install this app, you don't need to download something and take up space on your phone, just use it and that's great from a low-end user's perspective, and they prefer that model. Also works offline, works really well on flaky networks, and 2G connections, that is really important. Which is not always the case when you have Android apps. Those are the areas where we find that from a user's perspective, it's meeting these needs, the Web is a great solution, and if you can build that capability into the Web, that makes it a very good proposition."