Should telecom service providers (TSPs) such as Airtel be allowed to introduce differential pricing for data usage - or in other words, should your Internet provider be allowed to charge different rates for the various apps and websites you use? Some even interpret differential pricing to include ability to price data differently, like how much data you have consumed (e.g. first 100MB free or at a higher/ lower rate) or the time of the day (e.g. free Internet during night hours). The Telecom Regulatory Authority of India (Trai) on Thursday held an open house discussion on the matter at PHD House in New Delhi to take comments from stakeholders - service providers, third-party services, and consumers.

Not surprisingly, TSPs were strongly for the idea of differential pricing, while privacy advocates spoke out against it to Trai. Between these two groups were users, who came across as having a mixed opinion.

If Trai decides to allow differential pricing, telecom operators will be able to allow users to access websites or services without paying for data - the service provider or website will instead have a business arrangement with the TSP. One example of this is Airtel Zero, through which Airtel would have given access to services such as Flipkart without charging customers for data.

The problem with this - according to people who are opposed to differential pricing - is that it is against the concept of net neutrality, a principle that says says all websites and services on the Internet should be treated equally. The idea behind this is that if you treat websites differently, then it hampers innovation and growth. In such a scenario, new startups that can't afford to pay for preferential access will be left helpless against deep pocketed companies that are well established, protecting the status quo.

Here are some of the highlights from the Trai open house in terms of comments by various stakeholders.

Facebook
Facebook, which has spoken out in favour of net neutrality in the US, has been caught up in a campaign to preserve its Free Basics initiative in India, which could also be affected by the decision on differential pricing. The social network has reportedly spent Rs. 300 crore on advertising to campaign for Free Basics, and has been engaging in a war of words with Trai lately.

At the Trai open house, the Facebook representative kept her remarks brief, stating that the social network is committed to connecting more people and that the company hopes that Trai will "encourage innovative models that expand access, bringing more people online, like Free Basics which is free, and non-discriminatory."

Bharti Airtel
Airtel is perhaps most directly involved with the questions around net neutrality, as it had rolled out a plan with extra charges for using Skype, and when it met with outrage, rolled it back in favour of Airtel Zero, which fared no better in public opinion.

Despite, or perhaps because of this, Bharti Airtel supports differential pricing, and says that this enables the telecom operator to charge from not just one party - consumers - but both parties, the consumers and service providers. "If we have only one type of tariff, it will actually stifle innovation," an Airtel representative said at the event. The operator also claims that if it is not allowed to charge for features that are substitutes for its core services, then it will not have any incentive to build infrastructure.

The company added that it is assuming that Trai isn't considering this consultation paper to mandate any rule over VoIP services as those are a substitute for telecom services, and requested a separate consultation for VoIP. 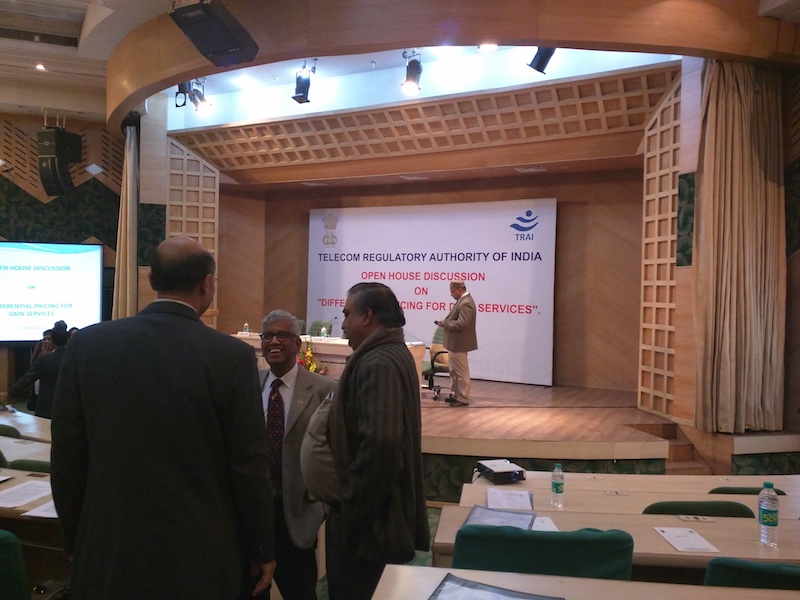 Tata Communications
"If Flipkart and Snapdeal are sponsoring content, nobody is going to buy their products just because Internet access is free. There are hundreds of other sites available that a person can always take," said a Tata Communications spokesperson at the event. The representative said that such a model exists in other industries such as food, and that users can still choose to use any service.

"This is all about the freedom to do business. I have got a business model where if I get more eyeballs I will make more money so therefore I want my content access to be free," the representative said, adding that if Trai disallows this model, then it is disallowing TSPs and content providers to do business together.

Oher TSPs
The other TSPs present also supported differential pricing, with a Vodafone representative saying, "the same principles that have been adopted for voice telephony should be extended to data as well." The representative for Idea said that differential pricing is a key to the growth of the country, while a Reliance representative said, "He [the end user] doesn't want to pay for services he is not using. He would like to pay for specific things," suggesting the company is in favour of 'bouquet-like' Internet pricing, a nightmare for net neutrality activists.

Star India
As a content distributor, Star India is one of the companies that could look to do business with TSPs, if differential pricing is allowed. However, it's worth noting that many of the TSPs, such as Airtel and Reliance, already have their own content play (through their respective DTH services) which would put Star's live video service at a relative disadvantage if differential pricing were allowed, and TSPs could make access to their own content free.

Star India stood against the notion of having a differential pricing on data and services. Speaking from a copyright industry point of view, a Star India representative said, "We see this (differential pricing) as a backdoor entry of telcos who have been primarily interested with a public property like spectrum." He added that telcos want to become an "intermediary between content providers and consumers."

Star India also commented on Facebook's Free Basics initiative, saying that it should not be allowed for even a year as it is poised to destroy innovation in the country.

"I am glad that the telecommunications companies have been honest enough to acknowledge that they are coming from a pure commercial angle by comparing them to airlines industry," he said.

"However, I can appreciate that Trai is regulating this from a point of view of consumers and users. [...] The information industry is different because it is linked to democracy and that providing information to consumers based on which of them have more marketing power will harm the democracy - we would lose platforms that serve extremely marginalised communities that are in the dire need of information."

"Consumers can say that they prefer Flipkart, but that would be because they haven't seen anything outside Flipkart."

"The Internet is a public resource that needs to be governed in the public interest," the representative added, saying that there are initiatives to keep women safe that use the Internet to help others. "Will they be able to join differential pricing packages?" she asked. "Some of them surely will. Will they be able to do so on their own terms? No, they won't."

"For a change, I'm supporting differential pricing," he said, and added that he wants everyone in need to have access to the full-fledged Internet instead of "baby-Internet", implying he may not be in support of projects like Free Basics, but he believes TSPs should have some amount of flexibility when it comes to pricing.

He pointed out that network is not being utilised properly, so there is no reason why telecom operators shouldn't utilise the extra bandwidth to offer users access to the Internet during night hours -- as they have done with voice calling in the past.

"Telecom operators have themselves said that they have plans to offer free voice calling in the night. Let the telecom operators offer free internet at night from 12 am to 7 am, instead of judging who should see what on the Web," he said.

The consumer
These were just some of the stakeholders speaking at the open house, but the one voice that probably is getting lost in all this is that of the consumers. One such person who identified himself only as Girish, spoke as a consumer in favour of differential pricing.

"I, as a consumer of Airtel and Flipkart, don't quite understand consumer groups saying differential pricing should not be allowed," he said.

"Ever since the Airtel-Flipkart deal was called off, I am paying for the site. Discounted pricing should be provided as it is benefiting the customer," he said. "I don't mind if Flipkart is paying for my browsing. I really don't give it a second thought. If I get it for free, I would like to have it."

Of course, as Trai wrote in its letter to Facebook, the consultation paper is not an opinion poll, and the decision will not necessarily be based on majoritarian wants, but will be a more considered one. Whatever the outcome, the only thing that's certain right now is that Trai will not be able to please everyone with its decision, which will be announced by the end of January.