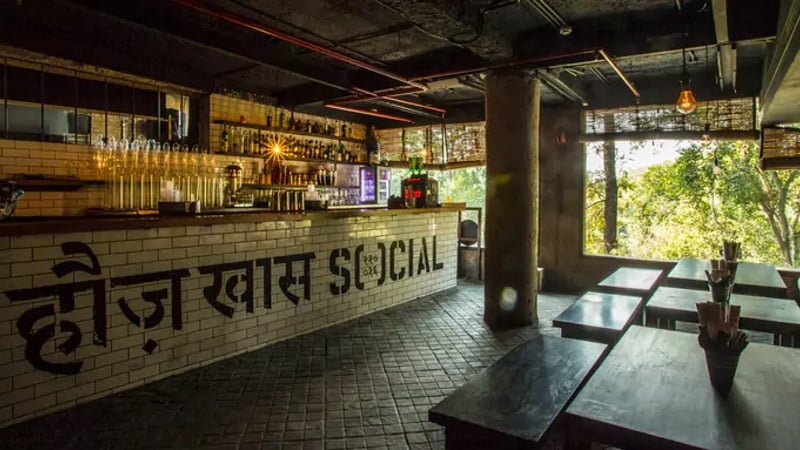 Every weekend, the partiers flood into a New Delhi restaurant and dance club called Social, a three-story destination on the edge of Hauz Khas Village, one of the city's most popular nightlife neighbourhoods.

After nightfall, the bar is busy and the dance floor is full. The lines regularly stretch out into the street. The dancing goes on until 1am.

But just a few hours later, the watering hole will be clean, the tables will be cleared of silverware and plates and the nightclub will have been transformed into a cozy office where no one gets fired for drinking at work.

Everyone shares desks at Social: photographers, designers, journalists, software programmers. They bounce ideas off one another, hire one another and collaborate to expand their businesses. Everyone is either a freelancer or working for a small startup.

As India emerges as one of the biggest markets in the world for tech-based startups, workspaces are transforming from traditional and hierarchical to relaxed and bar-like.

"It's the millennial personality," says 29-year-old Dinsa Sachan, a freelance journalist who works out of Social. "People don't want to bow down to random bosses in their offices. They are seeking more meaningful work. So, I think co-working spaces are like a melting pot for individuals like these."

The first co-working offices began springing up in India about three years ago. Today, there are at least a dozen in New Delhi - though Social is the only one that also functions as a restaurant - with similar numbers in Mumbai, Bengaluru and Hyderabad, where most Indian startups are based.

With more than 4,200 new technology companies, mostly phone apps or websites, by the end of last year, India now has the third-largest startup industry in the world, behind the United States and United Kingdom, according to The National Association of Software and Services Companies, or Nasscom, an Indian industry research company.

Foreign-based investors are opening their coffers, and now comprise most of the money being pumped into Indian startups, Nasscom says. Funding for Indian startups is growing at more than 125 percent a year, with an additional $700 million (roughly Rs. 4,680 crores) estimated to be invested before February 2017, according to a 2016 report by InnoVen Capital, an Asian venture capital firm.

Riyaaz Amlani, the owner of Social and a powerful force in the changing Indian restaurant scene, said he noticed a demand for cheap office space in prime New Delhi locations and decided on a fluid concept for his restaurants. There are now 14 Social outlets across India, all of them also co-working spaces.

"Increasingly, offices started becoming more like cafes, right? Google, Yahoo, Facebook, Twitter," the 41-year-old says. "If you get into a traditional office environment, you know, it's all very cut-and-dried. It's all very hierarchical. Your importance is measured by the amount of square-foot" your office has.

Most Indian startups are created by people under age 28 who often cannot afford skyrocketing rents in big-city office districts.

Membership fees at most Indian shared offices are usually less than $100 (roughly Rs. 6,700) per month. They also come with free access to networking events, investors' conferences and even parties. At Social, members also get lockers, free internet and can redeem their monthly fees for food and drinks.

Rishi Jalan, a 25-year-old who started a sports management company for student athletes two years ago, said the free flow of ideas and inspiration is one of the top reasons people choose to work at a shared office space.

"I know so many of my friends who actually went to a co-working space and found their co-founders," says the Cornell University graduate. "Everyone, I feel, in these kind of co-working spaces in Delhi, is a guy who's motivated. Firstly, because you have to do that if you're an entrepreneur. And secondly, they're all ready to share their ideas."

Like Jalan, many young Indians are moving away from traditional low-paying, entry-level jobs and want to do something of their own.

"In my day, we didn't have this opportunity available to us," says Amlani, the Social owner. "Our heroes were rebels and rock-and-rollers, and the millennials' heroes are people like Mark Zuckerberg, and Elon Musk, and people who want to change the world with an app," he said. "They're blazing their own trail. And that's amazing. And we're just happy to facilitate it in a very small way."