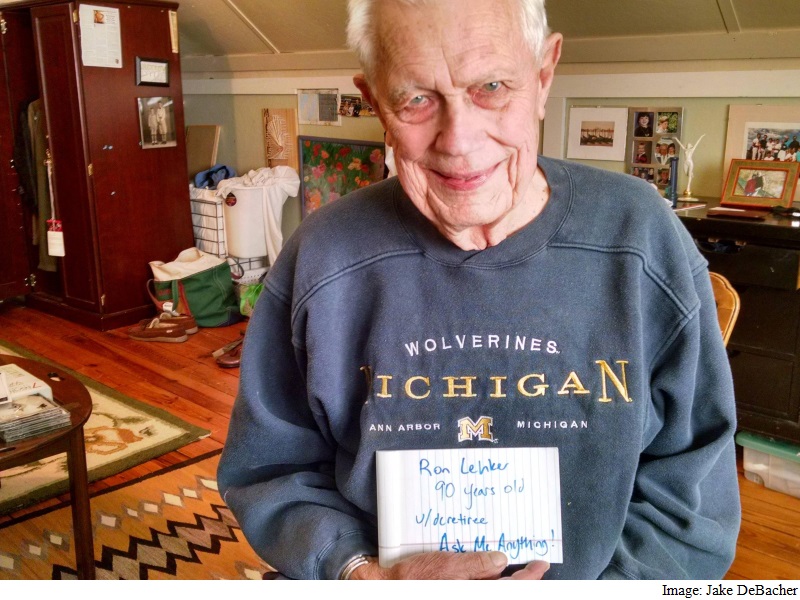 He slides the foam headphones over his drooping ears and fixes his pale blue eyes at the computer. Reddit.com is pulled up on the screen. The site is "one of the social media tools that is in vogue with young people," he explains.

When Roland John "Ron" Lehker was born, there was no Reddit, no social media, no cell phones, no computers. Nobody had televisions and people barely spoke to anyone who lived outside their neighborhood. But now Ron was sitting in the attic of his D.C. home, answering questions from strangers all over the world.

Hi! If you would want everyone to know one thing, what would it be?

Ron, What do you think about Donald J. Trump as a Presidential candidate?

What was the worst day of your life?

Ron - everyone online knows him as Ron - addresses each question slowly, speaking into a dictation machine that transcribes his answers. He's been doing this for days now, trying to catch up ever since his grandson set him up in a little corner of the Internet known as Reddit's "Ask Me Anything" or "AMA."

Anyone can set up an AMA by explaining who they are or what they've accomplished. Then the forum is an open invitation to ask them questions. Most non-celebrities who do it get a few dozen responses. On Jan. 10, Ron posted: "I Am 90 Years Old -- An officer during WWII, a retired educator, and more engaged with society today than I've ever been before. AMA!" Ask me anything! 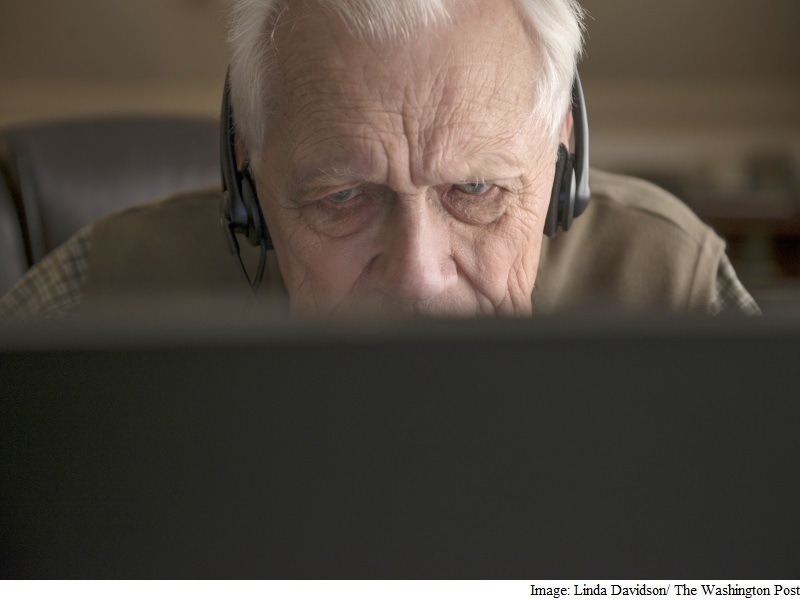 Yet every morning, he climbs the three flights of stairs to the room where he keeps his sweater vests, cassette tapes, blood pressure cuff, framed photo of his first love, and now, his beloved Internet connection.

I'm curious, the next one asks, how it feels to get old?

He wakes up at 7, but sometimes 4. He goes to two churches, even though he doesn't believe in God. He brings his business cards on the Metro in case there's a chance to make conversation with someone, like if they're wearing cowboy boots - "Hey, are you from Texas? I was born in Texas!" He volunteers at Miriam's Kitchen and the White House Visitor Center. He dines out at Old Ebbitt Grill, listens to lectures at Politics and Prose, gets great seats at the Kennedy Center. He is polished and sprightly and only carries his cane, his friends joke, to shoo away all the women.

Ron is not only always finding things to do, he is the source of things to do, on his blog, dcfreeculture.com. It started from a list of events he'd like to attend; that turned into a list-serv, which became a blog, with the help of his 24-year-old grandson Jake DeBacher, who would then post the link on the D.C. Reddit page.

"He's not just an old person using a computer in an adequate fashion, he's creating something people use and appreciate," DeBacher says.

The rules of Reddit require proof that the person hosting the AMA is real, so Jake posted a link to Ron's blog, a photo and a brief bio of his life: he was a Marine at the tail end of WWII, a 6-foot-4-inch basketball player, a teacher, a principal, a father of four, a grandfather of nine, a husband of 43 years, then a widower, then a partner to someone he met after retiring in D.C. He has been on the planet since 1925. Ask him anything!

The more Ron answered, the more he seemed to surprise the masses:

You have seen America change so much ... as a black person I'm curious to know if you ever thought we would have a black president? Do you think America is headed in a good direction?

"Thank you for the question. The current social, political and international scene fills me with despair because I have thrilled at the trajectory of American society. Growing up in Texas with segregated drinking fountains along with almost everything else, I have truly felt the trajectory has been in a positive direction. What a thrill for me to volunteer at the White House visitor Center and see scores of African-Americans feeling for the first time that the White House is truly the house for all Americans."

You've seen a lot of things through the years. What, in your opinion was the worst fashion trend?
"The zoot suit. We even had a great song about it in the 40's. But I also feel a BAD trend was the plainness of mens clothes most of my life. Today we begin to burst out of that fashion with better looking stuff -- think of the variety of mens shoes today. Of course this is only from a male point of view about mens clothes."

Would you say your love for your new partner is the "same" as the love you had for your wife of 43 years? Why or why not?
"OMG! I love the new social media -- such a fascinating way to connect, yet so sterile in its ability for us to get acquainted ... I must say that love is NEVER the same. Life was different/we were each different before. I've experienced life and pleasure with Linda I never did before. Since we both lost a previous experience we appreciate joys more deeply and are endure pain more deeply than before."

In your opinion, was the atomic bomb necessary to end the Pacific War?
As a young person today, I find it really hard to be anything but pessimistic about our current state of affairs ... Are things really as bad as they seem? Or do I just lack perspective?

Who are you voting for in the presidential election?
He tries to be their guru, passing on what 90 years has taught him: that it's OK to be trusting, and even better to be honest. That things are better today than they were in the past for almost everyone. That his biggest regret is not reading enough. But how can he explain the feelings a dictation machine can't transcribe?

The guilt that comes when people say "Thank you for your service," even though he never deployed in 1943.

The struggle as a principal to bring harmony to schools that didn't want to accept desegregation in the 1960s.

The promise he made when his wife, Regina, was dying in 1995, that he would try to be the grandpa and the grandma when she was gone.

The joy of finding love again, in 2001, when Linda responded to an ad in the newspaper that said, "Elderly gentleman seeks female companion for dining out, going to the Kennedy Center and generally enjoying the city."

The hope that one day, when his time comes, he'll just drop, quick and easy. 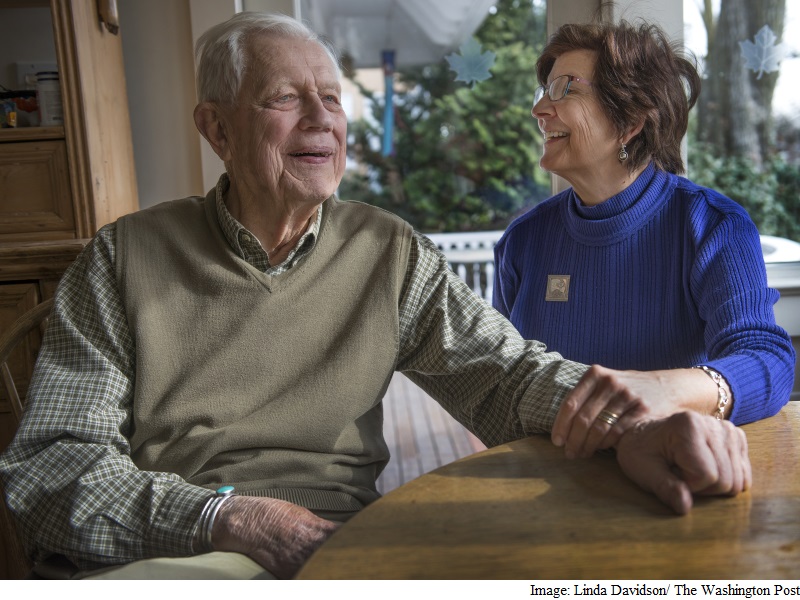 Until then, there's so much left to do. Ron says he has $150,000 (roughly Rs. 1.01 crores) left to his name, and instead of leaving it to be divided up between his many family members, he's going to use it to make meaningful memories with each of them. He's taking his grandson Jake to Texas, to show him where he grew up. With one of his sons, he'll visit Regina's hometown in Colorado, to have a last look at the church where they were married. He'll fly his twin grandchildren who love seafood out to D.C. to take them to all the best crab restaurants in the city.

In between, there's Politics and Prose. Movies at the National Archives. He wants to read Ta-Nehisi Coates's "Between the World and Me" a second time. And meet some more people on the Metro.

"One of my children said to me, 'Just sit back, Dad, and enjoy life. Just take it easy and do what you want.' And I just can't do that. I think that's where we do get old."

The other secret to staying young, he says, is to spend time with young people. Like the ones on Reddit, who he visits every day. His grandson Jake explained that the way the Internet moves, an AMA from January 10 will be old news by January 11. There won't be a room full of people to read his answers.

But all Ron cares about is that when he answers a question, the person who asked it will get a notification, even if it takes him years to get through them all.

Hello mister, back when comics book started, did you read some of them ?

Do you feel old? If yes, when did you start thinking so?