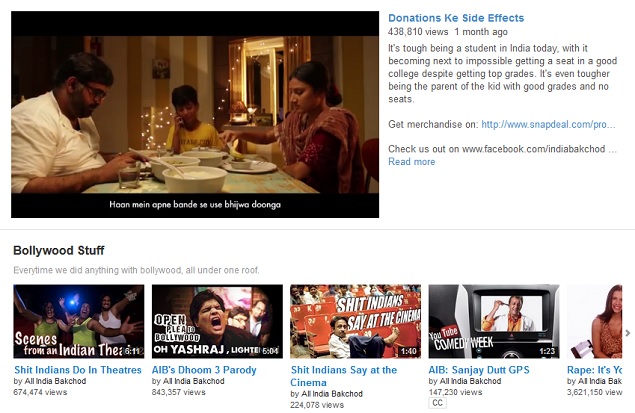 A housewife with a knack for cooking, an avid gamer who uploads walkthroughs on YouTube and a gym trainer who can teach you how to strengthen body segments - these people might not have a lot in common, but they are part of a new breed of entrepreneurs using YouTube to create and make money from their original content. They are India's YouTube stars.

YouTube's Partner Program has been around for years now, but more and more people around the country are warming up to the concept, with individuals, small production houses and even the big channels in the country getting in on the act.

Trendsetters and mythbusters
Individuals such as Nisha Madhulika, who runs a channel on YouTube called Madhulika's Kitchen. With hundreds of videos and over a 100,000 subscribers, this very ordinary-seeming middle-aged woman has managed to build a following that many would envy.

From her YouTube channel that posts simple recipes, she's built up to have a full-fledged website and released an e-book as well.

A similar story is Manjula's Kitchen, a channel that started eight months ago, and already has over 150,000 subscribers and over 250 videos of vegetarian dishes. From the early days, her channel had over 12,000 views, and now many dishes see 100,000 views. A few highly popular ones like this simple roti making guide have even crossed two million views.

Mayank Prajapati, who worked as a graphic designer from Delhi, started to make videogame walkthrough videos around six months ago. Prajapati says, "Yesmoney is slow, and I make about $30-$50 a month depending on the views that the walkthrough receives. I contribute content for a YouTube channel called Zoomin TV Games. And then based on the views it receives Iget a percentage of the money. I also have my own channel, MiKeYROG, through which I make a little money as well."

One of the most successful groupsof Indians on YouTube is the popular stand-up comedy team of All India Bakchod (AIB). Comprising of founders Gursimran Khamba and Tanmay Bhat along with Rohan Joshi and Ashish Shakya, the AIB YouTube channel has been around for two years now (since Jan 2012) and has over 4 lakh subscribers and over 16 lakh views.

These are all ordinary people - or were at least until YouTube made them 'stars' - using basic equipment and they're at the forefront of the streaming revolution that's taking place in India and across the globe today.

Doing the math
Tying it all together are content producers who manage YouTube channels across the board. Take for example Nirvana Digital, a Mumbai-based company that started in 2012, which now has over 200 YouTube channels, and claims to have uploaded over 2.5 billion minutes of video content online.

Pinakin Thakkar, Founder-Director, Nirvana Digital says, "The market is growing both rapidly and slowly. The bigger players obviously with more resources at their disposal are creating YouTube channels that have thousands of videos whilst individuals have lesser numbers. So on one end the growth for the bigger channels is impressive, but individual producers are coming on board slowly but steadily."

Nirvana Digital claims that they have crossed one billion views in two years. Thakkar is quick to mention that the bulk of the viewership came in the last one year and is hopeful that they will complete a billion views this year. "We direct traffic from other relevant videos to a new one created by a first time content provider. This enables us to build a community and increases views for all our content owners. We promote this kind of collaboration to boost the views. We also identify and match videos uploaded by fans on YouTube, which in turn we claim and ensure that the actual content owner makes revenue from them too. Music for instance can be directly pushed onto iTunes, which is linked from YouTube to drive music sales," says Thakkar.

YouTube pays $10 usually for every 1,000 views, as Thakkar informs. "In fact the minute or-minute-and-half long ads which run prior to the video have a skip ad option, which if clicked doesn't generate any revenue for the content provider. The 30 second ads, which cannot be skipped, do generate revenue however."

For someone like Prajapati, that means that even the meagre $50 he gets in a month requires at least 50,000 people to be watching; the number of viewers he actually needs is a lot higher when you factor in the number of people who skipped ads.

Thakkar expands on this, and says, "It takes time to start generating money. Also having a wide subscriber base helps as there is a good chance that most of the subscribers would see a new video uploaded by a content creator, which in turn would help generate revenue."

But speak to AIB's Khamba about it and he says, "For us at AIB our main revenue generation source continues to be live acts. The YouTube channel is just an extension of the same. But it generates a very small sliver of the revenue and even what it generates is used again in producing new content."

Currently AIB has a partnership deal with Snapdeal.com. Khamba says that on an average a crude video put together hurriedly still costs around Rs. 70,000 to Rs. 80,000 while a good quality video costs Rs. 2 lakh, which includes music, acting, editing and the rest of the post production. "All the money that we do generate from YouTube usually is put back into the business to create new content. There is no extra income there. Not for now at least. Perhaps a few years down the line when we get more partners and subscribers, the money coming in will be substantial. As of now it is negligible," he says.

Instead of being a way of making money, for India's YouTube stars, it's really more about getting fame and a chance to break into the public eye. Khamba says that in many ways the YouTube channel has aided them in spreading out their wings across the nation. "The content that we put up on YouTube is helping us to build a loyal subscriber base. Once that is done, the money will come. As of now, these are interesting times that we all live in. And as the days grow, it will only grow on to become bigger," he adds.