"Normally, you'd be asked to switch your phones off before a flight, but this time, we'll ask you to turn the Wi-Fi on," says Neelu Khatri, President, Aerospace for Honeywell India.

We're standing with a group of journalists on the tarmac at Indira Gandhi International Airport in Delhi, in front of Honeywell's "connected aircraft" - it's an aircraft that uses Honeywell's Jetwave technology to provide high-speed Wi-Fi in the cabin. The Internet connectivity also allows the plane to report on-board data to an on-ground location, while also offering the crew another way to stay connected.

Honeywell is taking us for a circle around the city, and once we're up in the air, we connect to the in-flight Wi-Fi to see what the customer experience could be like once the Indian government approves use of the technology on domestic flights and it starts to making its way to a flight near you.

The connected aircraft has just come to India from China - from the outside, it looks like a regular Boeing 757, though it's blazoned with Honeywell's logo. On the inside though, most of the fittings you take for granted in a commercial airliner are missing - there are only a few overhead storage bins, and 10 seats in the front, eight more in the back, along with four seats that are next to equipment displays. The sides are exposed, and you can see the copious amounts of wiring that all aircraft have, which are normally hidden out of sight. It's also extremely loud in the plane, and Khatri has to shout to be heard on board. 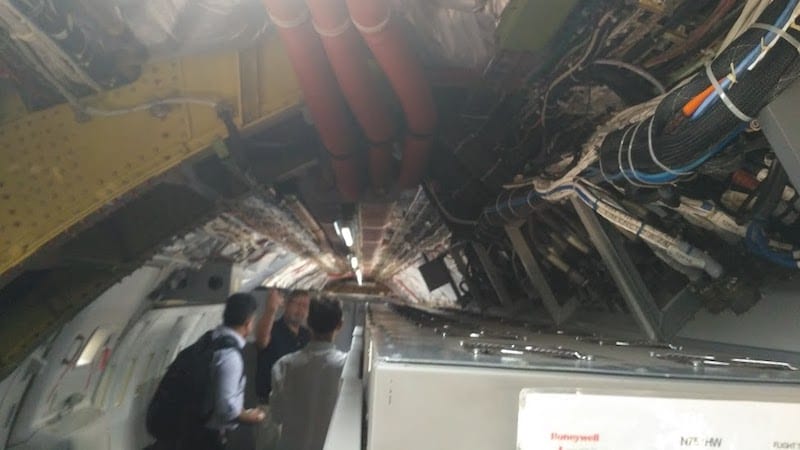 "We've been in the business of aircrafts and software for decades, and have been rolling this technology out globally," she says. "Lufthansa is already on board with around 80 aircraft, and more are coming, as well as other airlines such as Qatar [Airways], and Singapore [Airlines]. We estimate that around 25,000 planes will be equipped with Wi-Fi by 2025."

Netflix at 10,000 feet
Once we're up in the air, Honeywell gives us the go-ahead to connect to the Wi-Fi network. It's being beamed to the plane via satellites, picked up by a dish on the top of the plan that can rotate and tilt to catch the signal as it flies, and then broadcast inside the plane using ordinary Wi-Fi routers.

We connect to the network and - as one does - run a few speed tests. Netflix's ‪Fast.com‬ reports a speed of 25Mbps, while Ookla's Speedtest says the download speed is 23.95Mbps, but upload only 1.4Mbps. Ping to London is 572ms.

Sasi Kancharla, Customer Business Leader, Middle East and India, Honeywell Aerospace, says that the stream can go as high as 50Mbps, but the bandwidth available to end users is likely to be in the 30-40Mbps range. He points out that this is just the currently available speed, and the underlying technology can support higher speeds. 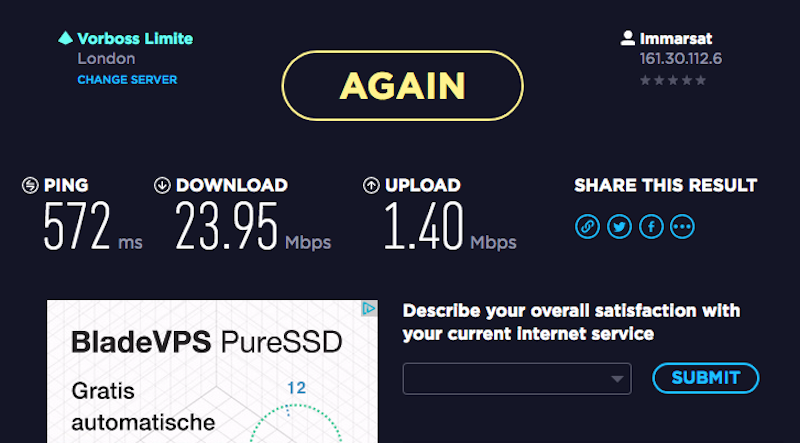 We go ahead and place a WhatsApp Video call. The quality is pretty good, though there is occasional pixelation. Considering that we're pointing the camera through the window to give someone a live view of Delhi from up in the clouds, that seems like a reasonable tradeoff.

Getting back into our seats, we started to watch two movies, one on Netflix, and one of Amazon Prime Video. Both played smoothly, running side by side with little pixelation. Finally, we decided to get to work, and edited two articles, while uploading a story onto the Gadgets 360 website. Expectedly, this worked fine as well.

The only place where the connection is a problem is online gaming - the latency is just as, if not more, important than the overall bandwidth in such usage, and that's an area where a connection on the ground still has an advantage.

Of course, there's the fact that this is a test flight, going through planned and optimum connections, with only a handful of users dividing up the bandwidth. Kancharla however disagrees, and says that we're all trying to use data-intensive applications all at once; adding that on a typical flight, most users will just check their mail or social networks.

What will it cost me?
Kancharla says that each airline will do something different when it comes to charging for these services. He can't tell us what the typical cost to the airline will be either, as each deal will be unique.

In markets where in-flight connectivity is already an option, rates vary, with pricing of around $13 (roughly Rs. 850) for many flights in the US via Gogo, EUR 10.95 (roughly Rs. 800) per hour on Lufthansa, or 150MB for $9.99 (roughly Rs. 650) on Emirates, a change from its generous 500MB for $1 that was available until recently. Emirates does offer the first 20MB for free to everyone for up to two hours.

In-flight Wi-Fi experience varies quite a bit from one airline/ region to the other. On Emirates long distance flights, for example, connections typically start off fine but by the time around 40 people are connected to the network, things usually degrade enough to make the connection falter. Perhaps that is what Emirates is looking to address by doing away with its $1 plan, which made Internet access practically free for everyone.

The real issue we've faced though is that as your flight nears the poles, connectivity fades out as satellites don't cover this area.

Three satellites, and spot beams
Although Kancharla says that the network doesn't fade out, in the map of coverage that he shows us, we can see some gaps around both the North and South poles, and also some parts of Greenland. Save for these, the rest of the world looks to be covered. 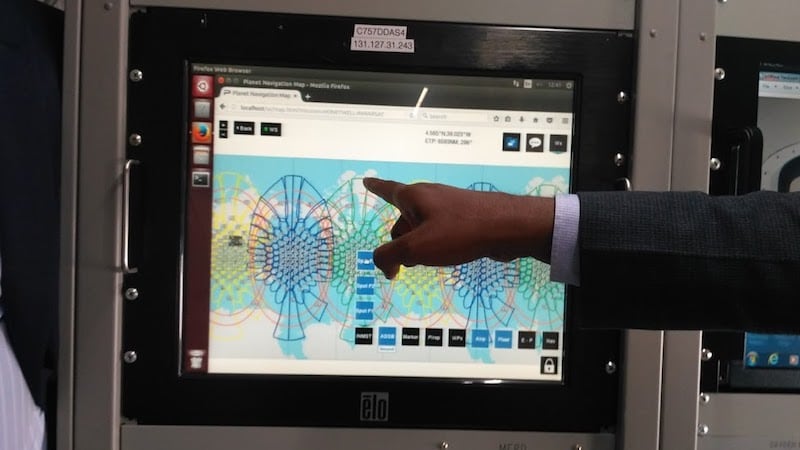 "Inmarsat is our partner for this, and they have three satellites that cover the whole planet," he explains. "Each of these satellites is not a single beam, but it's divided into a series of spot-beams. These beams form a web of coverage, and automatically hand you over as you move from one to the next."

Seen on the map, the whole picture looks like a cellular grid, just on a global scale instead of neighbourhoods. The spot beams overlap at the edges just like a cellular network, and we're looking at a display showing the plane moving through the network, along with a video feed showing the satellite dish on top which can move to pick up the signal at the optimum angle.

These beams are using something called K-band technology. Others, such as the connected A380 use L-band, he says. The difference between the two is one of frequency - K-band is operating at higher frequencies and this allows for greater bandwidth, and as per Kancharla, fewer drops as well. 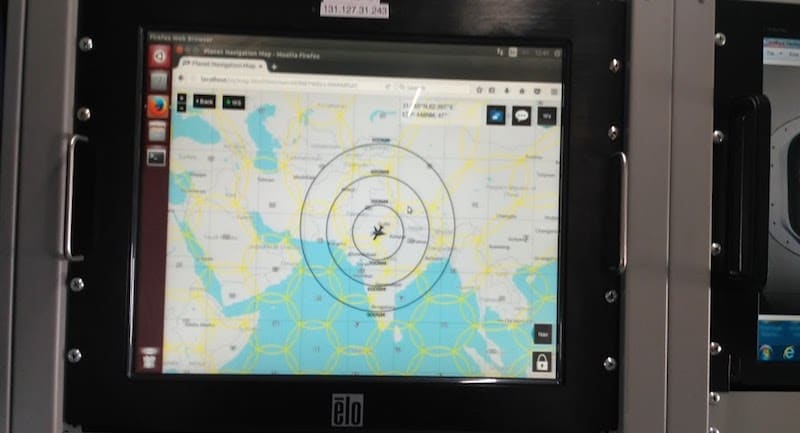 More than customer Wi-Fi
In flight Wi-Fi isn't just an added amenity to offer to passengers though. It can actually have a much bigger impact than that. According to Honeywell, an Airbus A380 is fitted with 25,000 sensors and a single twin-engine aircraft can generate up to 844TB - that’s terabytes - of data from 12 hours of flight. The same satellite beam that is giving passengers Wi-Fi is also being used by the pilots in the cockpit for XYZ, and for M2M communication that can be sent from different on-board equipment to report their status back to the ground.

Being able to access this data in real-time allows for a number of additional benefits, Khatri explains, as it enables preventative maintenance of parts, better co-ordination with ground crews, and access to information like weather in real-time can lead to more efficient route planning. Preventative maintenance by itself could have a big impact, she adds since a single grounded commercial jet can cost the airline as much as $10,000 (nearly Rs. 6.5 lakh) an hour.

Ground crews also have access to tools like connected apps - these can be pointed at readouts on instrumentation to provide detailed information from the safety manuals, instead of having to send the codes to the home office for a detailed explanation. Tools like these, Kancharla explains, can be developed as quickly as apps for smartphones. 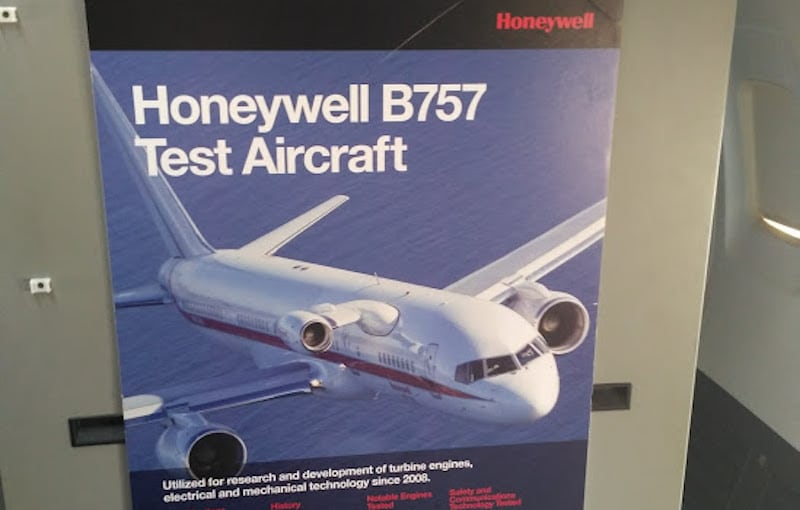 Keeping this in mind, we wondered, is providing customers with Wi-Fi more of a fringe benefit, with the real goal being to bring the planes themselves online, and make them more efficient?

"As a passenger, you will only see a small part of what we are doing with this but that doesn't mean that isn't an important part of the equation," says Kancharla. "The benefits go to the passenger, the pilot, who can get better feedback, the grounds crews, who can turn around planes faster, you get better routing, better utilisation, all of these are very important."

"Even earlier, some data was shared, but it was limited in terms of the amount of information being sent," he adds. "With the newer systems, you can give detailed information and provide real time updates to the airlines."

The other worry we have is that if the plane's systems are connected, will they be at risk? We asked if some of the bandwidth is reserved for the cockpit and instrumentation, but Kancharla says that the same stream is used by everyone. However, he says that none of the critical systems have open communications, adding that Honeywell has taken all the precautions to ensure safety and security.

Honeywell sees India as a high growth area, and Khatri says that the company is dedicated to Make in India, and the Regional Connectivity Scheme. It has 3,000 engineers in Bengaluru, Hyderabad, and Madurai, she says.

Hurdles remain
While the advantages of in-flight Wi-Fi are clear, it won’t be available on your next domestic flight, and that reasons for that are not technological, but regulatory, as the government hasn’t given the green light just yet.

"We believe that the authority wants to offer in-flight Wi-Fi on all flights," says Khatri, before adding that the government hasn't shared any timelines or given companies guidance on when this could happen.

That said, she says Honeywell has been having meetings with most of the airlines in India, and that there is a lot of interest.

There are a lot of different ways in which the airlines could offer this service to passengers," says Kancharla. "For example, some might want to offer it as a per MB pack, others might offer it on the basis of time. It could be offered as a perk to business class, and a paid service for other passengers, or they could follow a kind of freemium model, where you can start to use the service for free."

Further reading: Honeywell, inflight wi-fi, Wi Fi, Connected aircraft, Maintenance, Airlines, Airplanes
Gopal Sathe Email Gopal
Gopal Sathe is the Editor of Gadgets 360. He has covered technology for 15 years. He has written about data use and privacy, and its use in politics. He has also written extensively about the latest devices, video games, and startups in India. Write to gopal@ndtv.com or get in touch on Twitter through his handle @gopalsathe with tips. More
New Customs Duty on Mobiles Will Hurt These Companies the Most
LG Pay Coming to Low-End Smartphones, More Markets in 2018