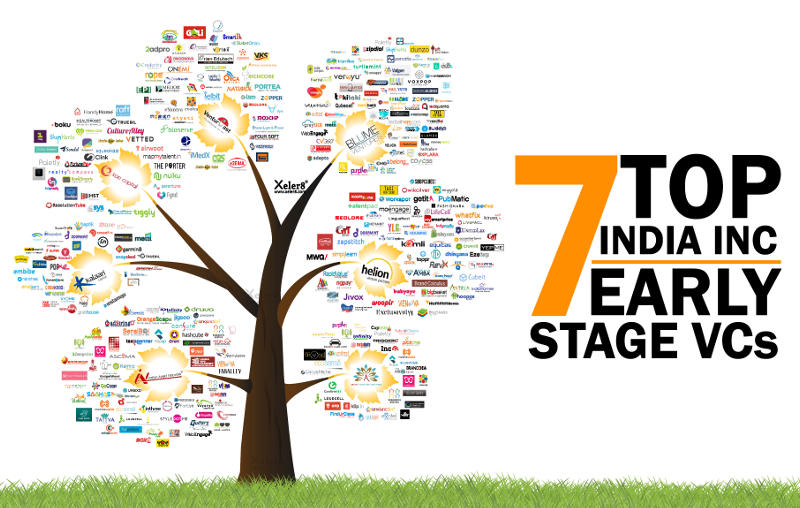 Startup deal intelligence platform Xeler8 has analysed the portfolios Indian early-stage VCs (venture capital) firms in India, to reveal the top seven who have cumulatively invested more than $1.5 billion (roughly Rs. 10,107 crores) in over 412 Indian startups since their inception. To start with, Xeler8 analysed the deals activity of all major early stage VCs in India, and narrowed the list down to the 15 busiest firms. From here, it then analysed the data in a number of different ways to arrive at the top seven.

The most prolific VC firms are Helion Ventures and Blume Ventures, who have made over a hundred deals each, and are followed by Indian Angel Network, Kalaari Capital, Ventureast, Artha Ventures and Kae Capital. An accompanying visual, in the form of a tree explores their investment portfolio in a post published on its blog. We took some time out to analyse the research to track their porfolio of investments and exits.

Xeler8's previous research on India's Super Angel investors showed how they have collectively unearthed only one unicorn (startups with a billion dollar valuation) so far - Ola. In comparison, the early stage VCs we are focusing on today have invested in two e-commerce unicorns - Snapdeal and Shopclues.

1) Helion Ventures has made 110 deals in 75 startups so far. It operates a $605 million (roughly Rs. 4021 crores) India-focused early to mid-stage fund makes investments in the fields of outsourcing, Internet, mobile, healthcare, education and financial services. The most capitalised startups in its portfolio are e-commerce marketplace Shopclues, grocery delivery service Bigbasket, real-estate aggregator Housing.com, and two leading EdTech firms - Toppr, and Simplilearn. In terms of exits, its biggest ones include Makemytrip, which had an IPO listing in NASDAQ in 2010, apart from its taxi and bus booking services TaxiForSure and RedBus, which were acquired by Ola and Naspers Group respectively. Flipkart had acquired its portfolio company Letsbuy in February 2012, while Mahindra Group had acquired Babyoye in early 2015.

2) Blume Ventures launched a $30 million (roughly Rs. 201 crores) fund in December 2015, and has invested in 105 deals and 83 startups to date. Its portfolio of investments include warehouse automation player GreyOrange, event booking platform Explara, and hyperlocal delivery service Roadrunnr. The firm is looking to invest in a dozen startups a year from the new fund for the next three years, and make seed investments in the range of half a million dollars.

The firm has a fairly active blog in which the founders share their investment outlook - they are typically looking for startups that are 'Blu Swans'- i.e. businesses that can scale to Rs. 1,000 crore or more in valuation. Blume has had 12 exits so far - out of which five were in 2015 - IndianStage (acquired by Explara), 1Click (acquired by FreshDesk), TaxiForSure (acquired by Ola), Promptec (acquired by Havells), and ZipDial (acquired by Twitter). In a series of posts dubbed the Investor Chronicles, co-founder Karthik Reddy writes that it has selection rates below one percent, though they tend to be higher when they come as referrals.

3) Indian Angel Network, a syndicate of over 400 angel investors in the country, has made 92 deals so far across the globe, investing in 88 companies since its inception in 2006. The firm has seen three exits so far - mobile video streaming company Jigsee was acquired by Vuclip, clinical research company Karmic Life Sciences was acquired by Cliantha Research, and PeelWorks, which raised $2 million (roughly Rs. 13.3 crores) in Series A funding from Inventus, and IDG Ventures. 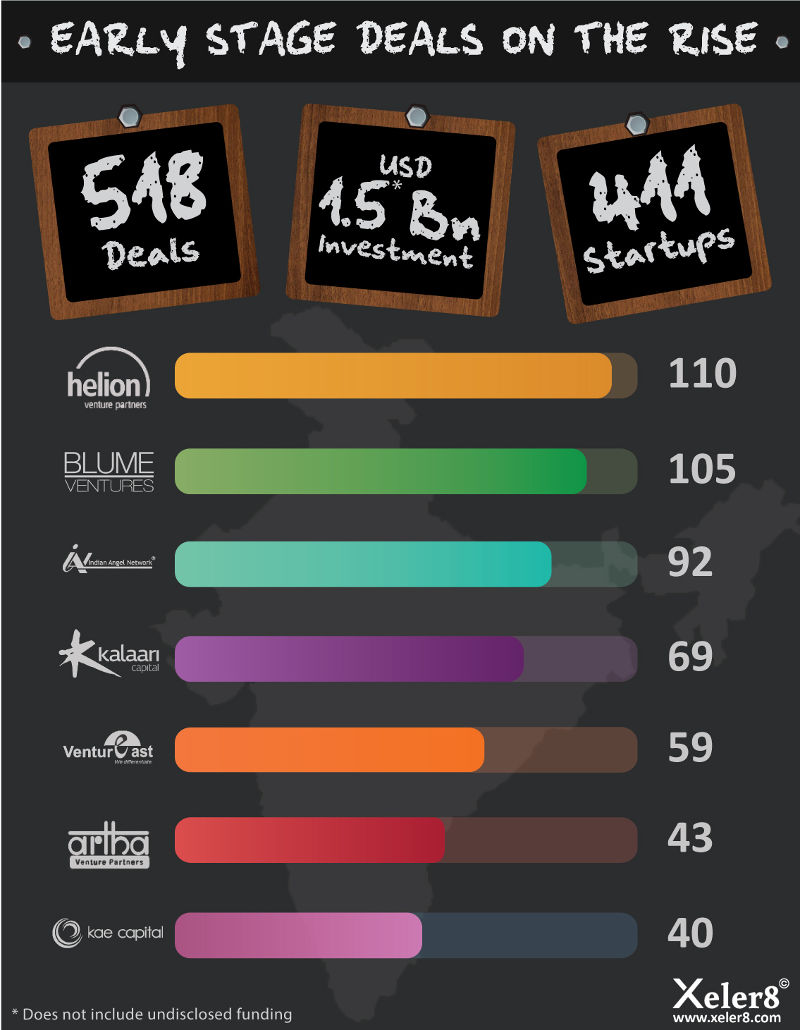 4) Bengaluru-based Kalaari Capital, which has raised three venture funds tallying to $650 million (roughly Rs. 4,372 crores). Its notable investments include e-commerce plays like Snapdeal, and Urban Ladder, EdTech startup Simplilearn, and personal assistant app Haptik. Its exits in India include Myntra, which was acquired by Flipkart in May 2014, and mobile video delivery platform Apalya, which was acquired by Arre, a digital media brand founded by Ronnie Screwvala in December 2015.

These seven Indian VCs have had 43 exits in total till date, with Ventureeast leading the pack with 16 exits, followed by Blume Ventures with 12 and nine from Helion Ventures. Indian Angel Network has had three exits, Kalaari Capital has had two, Kae Capital and Artha Ventures have had one each. A total of 69 startups from their portfolio of 411 were able to secure a follow on investment round.