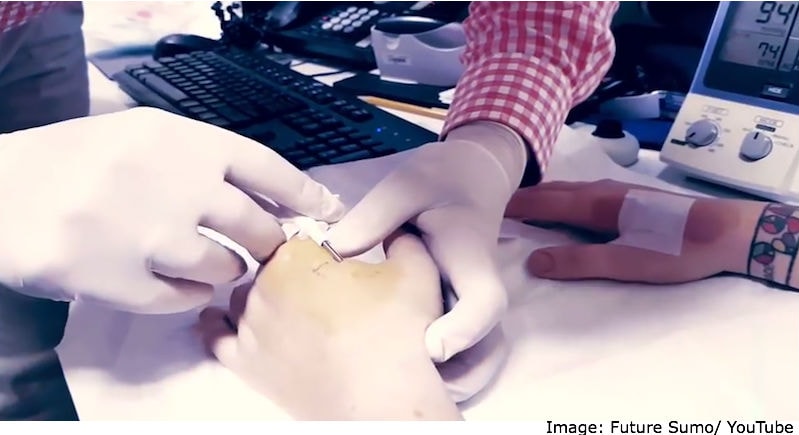 It's a mantra repeated by commuters the world over. Not so for futurist and entrepreneur Shanti Korporaal. Hers is different, something like "phone, hand, other hand." The 27-year-old Australian beat the system - no more self pat-downs and misplaced keys - with two jabs of a needle. The twin microchips implanted in the webbing of her left and right hands are keys and wallet, compressed into glass capsules the size of rice grains. (She'll have to wait a little longer to embed a wee smartphone.)

"I grew up watching 'Star Wars,''" Korporaal told The Washington Post by phone early Friday morning. The mystical powers of the Force made a lasting impression. Now, like a Jedi, she has the power to wave through doors that we muggles would need to open by key fob.

To those of us who do not have microchips under our skin, such technological conveniences may seem alien or at least a little perplexing. To the small but growing community called biohackers - which has existed, in some form, since the 80s - it is simply another step in the very long history of human self-improvement.

To Korporaal's friends, the chips are a source of chummy envy. Most reactions are "either curious or jealous," she said. "I can open doors without a key and they can't." Through her companies, including Future Sumo and Chip My Life, Korporaal and her husband, fellow futurist Skeeve Stevens, aim to make the implantable tech more widely available in places like Australia.

Thanks to the RFID chip embedded in one hand, Korporaal can unlock her office's garage with a back-handed bump to a scanner as she zips into work on her Vespa. On the other hand in the same spot, the fleshy space between her thumb and forefinger, sits a near-field communication chip that stores her health and contact data. She can feel a chip's hard lump if she probes with a finger; otherwise, she's used to them by now.

The chips are injected. A doctor implanted the chips into Korporaal's hands in May, though perhaps the person most famous for the procedure is a professional body piercer named Amal Graafstra. During his career, Graafstra has embedded chips into some 1,200 hands, Korporaal told The Post. "It's a really simple, 2-second procedure," she said. "It's in-and-out, in terms of the needle."

Though the needle bore has to be large enough to inject the chips, a little local anesthetic goes a long way. The worst part, Korporaal said, wasn't the procedure but the recovery process that kept her away from lifting at the gym for two weeks.

(Maybe the other worst part was a fringe Christian element that Korporaal said harasses her on Facebook, making references to the Mark of the Beast. According to the the Book of Revelations the beastly mark appears on right hands and foreheads. "It just doesn't make any sense," said Korporaal, who is Christian and has chips in both hands, to The Post.)

"Some people view the body as a sacred temple," Graafstra told Forbes in 2012. "Some view it as a sports utility vehicle they can upgrade. I'm definitely in the second category."

After the implant, setting up her Jedi abilities took little more than a Samsung smart lock, which runs a few hundred dollars, and cloning the RFID in her work keycard to her microchip. RFID technology itself is fairly mundane - it works passively, similar to a barcode, requiring no internal energy source. (If your pet is microchipped, that's an RFID chip inside Buddy, too.) The NFC chip in Korporaal's other hand, likewise, is of the same type used in Apple Pay systems. The goal with that chip, she said, is to use her hand like a wallet.

For all the science-fictional and futuristic inspiration behind biohacking, Korporaal sees mainstream parallels everywhere. Take dieting. "You're literally making small incremental tweaks to your body over time," she said, "using data from responses to your body to affect change."

Kindred devices might be a pacemaker or contraceptives like Implanon, the implantable, toothpick-sized rod that slowly releases hormones. As journalist Rose Eveleth argues at Fusion, implantable microchips should shock us no more than intrauterine devices. One controls doors, the other biology.

But where pacemakers, artificial knees and IUDs have one job, implanted microchips are flexible. They can also be entertaining. Korporaal recently programmed the NFC chip to activate her smartphone, summoning a video from YouTube. The flick in question? A trailer for the new video game "Deus Ex: Mankind Divided," set during a near-future war in which humanity is split against mechanically-augmented people.