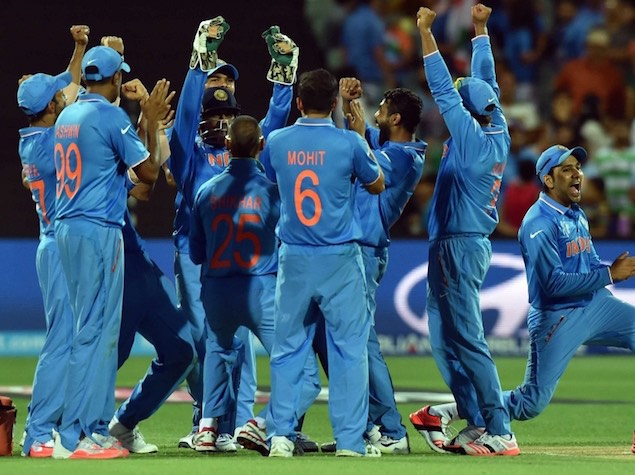 India are playing Australia in the second semi final of the ICC Cricket World Cup 2015 in Sydney on Thursday. The winner will go on to meet New Zeland in the final at the MCG on Sunday.

Just before the start of Cricket World Cup, the Indian cricket team had been touring Australia. The team couldn't win a single match after four test matches and tri-series. The poor run of form ended with the start of the World Cup, in which India is unbeaten.

The Indian cricket team has performed exceptionally so far in this edition of the ICC Cricket World Cup 2015. The Indian bowling unit, comprising Mohammed Shami, Mohit Sharma, Umesh Yadav, and R Ashwin as the frontline bowlers, has taken 70 wickets in seven matches so far. India will be looking to take another 10 wickets against Australia, but it will be a far more challenging task due to the sheer strength of Australia's batting lineup. Australia has lost just one match this World Cup, which was a nail-biting encounter against New Zealand in the group stage.

This India vs. Australia fixture promises to be competitive and Indian fans will be hoping for a victory against Australia in the semi final. If you're not going to be sitting in front of a TV screen, you can use social media or apps to track the latest updates from the match, but those options aren't as good as live video.

You can catch the game live from the moment it begins - 9 am IST. If you're stuck in office or don't have a TV, you can still watch India vs Australia live online. This guide will help you watch the match live video online no matter where you are in the world.

You will see details of the subscription. You can watch all ICC Cricket World Cup online for Rs. 120. This is valid only on starsports.com and not on any of its apps. You can watch live video feed through a Web browser on any device.

This subscription is valid in India only, though the website offers different packages in other selected regions. According to Star Sports, live video streaming will be available on startsports.com in territories that do not have a television broadcast of the ICC World Cup 2015. In other countries, the digital channels of official broadcasters will carry the streams (see below).

Watch India vs. Australia for free
Download the Star Sports app for Android or iOS. The app is offering free video stream of the World Cup 2015 matches that's delayed by a few minutes - a small tradeoff for something that's high quality, legal, and free. Star's Hotstar app for Android and iOS is also offering a similar feature.

Tata Sky Everywhere TV
If you are a Tata Sky subscriber, you can use its iOS and Android apps to watch Star Sports on your phone. You need to pay Rs. 60 per month to be able to watch all channels you've subscribed to online, and there's no extra charge for Star's channels.

Outside India
Star Sports' apps have an FAQ section which states that live feed for the World Cup is available for several countries other than India. So you can try downloading the app and watch matches live available online. You may have to purchase a subscription as described above. This covers most non-cricketing nations, along with countries in the Indian subcontinent except Pakistan.

USA
If you are based in the US, you can buy an online subscription to watch ICC Cricket World Cup 2015 from ESPN. This pass costs $99.99 and is available here.

Australia
Fox Sports network has the broadcast rights for live coverage of the ICC Cricket World Cup 2015 in India. To watch it live online you need a Foxtel Play subscription; more details available on the Fox website.

South Africa
SuperSport will live stream all Cricket World Cup 2015 matches online, but you need to be an existing TV subscriber to be able to watch these games. Live stream available here.

New Zealand
Sky Sport 3 is going to be broadcasting all the Cricket World Cup 2015 matches. You can watch it live online here. You need a Sky Go subscription for this, which you can purchase here.

Other regions
If you are in any other country, try your luck at Star Sports or check out the list of official World Cup 2015 broadcasters available on ICC's website. Star Sports is offering live video of the game via its website in the following regions:

Do you know of any other official methods to watch the ICC Cricket World Cup 2015 online? Let us know via the comments.