How Competitive Coding Platforms Are Changing the Tech Hiring Landscape

According to IDC, there are an estimated 11 million professional software developers and 7.5 million hobbyists programmers in the world. Expressed relative to the world population, that works out to one in every 386 people on this planet.

Competitive coding platforms like HackerEarth and HackerRank aim to help HR managers in the hiring process, while providing a platform for programmers across the world to evaluate and objectively rank their skills.To find out more about how the tech recruitment process works at the highest level, and whether hacker/ hackathon culture has come of age in India, NDTV Gadgets talked to both companies, and quizzed them about the trends they've seen in India's tech-industry.

Campus recruitment is broken
A notable exchange on Twitter by Flipkart CEO Sachin Bansal highlighted the resource crunch that India's leading tech companies face, in finding developer talent of the highest quality. For startups, traditional recruitment processes can be especially burdensome, as the highest-funded companies get swamped with a lot of resumes. Sifting through them to pick the right candidate can often take weeks.

"Hiring managers are engineers themselves," says Harishankaran K, co-founder, of Bengaluru-based HackerRank. "They should be driving to push product to market [rather] than making hiring decisions."

Even five to seven years ago, IT companies used to have a pen and paper approach to campus tests, with paper tests in the morning, and interviews going up to 2 or 3 AM, he says. His personal experiences with the absurdity of campus recruitment inspired him to do something about the scale of the problem.

HackerRank, the 5-year-old Y Combinator incubated platform, presently boasts a user-base of over 8,64,000 developers, with over 4,000 coding challenges in 30 languages. Over a thousand companies use the platform to find coding talent. Harishankaran says the scalability of his platform - he claims 10 lakh people can take a test at the same time - and its high regard in the tech community for its robust integrated developer environment (IDE) makes it a market leader in the category.

For recruiters, the starting tier of $199 per month (approximately Rs. 13,000) lets you issue code challenges to 25 coders. Companies can create their own tests or choose from a library of programming challenges; HackerRank's code-checker evaluates the code, correctness, and optimality. Once companies have paid the subscription, they also have access to a feature called CodePair, which lets recruiters have audio-video interactions with the applicants in real time, to watch the candidate's coding thought process unfold during the interview.

HackerRank claims to have facilitated over 100,000 recruitments on its platform in the last year, and HackerEarth (a similar platform) says that it conducts 13-15 hiring challenges a month, and that on an average, 3-4 developers get hired in each one of these challenges.

The way to judge a developer is by the code they write"There will always be a small percentage of highly competent developers who don't have an impressive pedigree and [they] will always be left out for the same reason," Gupta says. He adds that gifted programmers can be found in the unlikeliest of places, and many top quality programmers don't even make it through the first round of normal interviews, owing to reasons like college, CGPA, experience and other generic causes.

"We feel we are hugely changing this mindset and broken process. The most consistent pattern across all these hires is that all of them have been hired based on their skills and not their pedigree," says Gupta, adding that over 65 percent of hires on HackerEarth come from Tier II and Tier III colleges.

"The best way to judge a developer's competence is by the code they write and the products they've built," Gupta adds. "A coding challenge gives you a view of that. We believe that hiring should be meritocratic, and in the case of programmers, it's fairly easy to do." 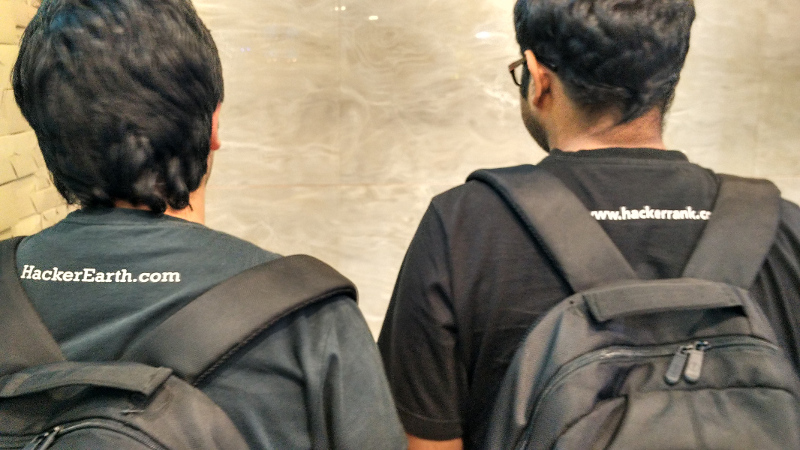 What this means is that instead of traditional resumes, organisations can now look up GitHub/ HackerEarth/ HackerRank profiles to evaluate developers, using these platforms as a more tangible measure of the developers' work, not just in terms of performance, but also their creative output and its value to the community.

HackerRank was founded in 2009, while HackerEarth was founded in 2012. While both the platforms have similar features, they do not see each other as competitors. The VC money has leaned so far on the side of HackerRank, which has raised $19.9 million so far. A Quora thread saw co-founders of both companies take a very mature and diplomatic stab at their rivalry.

We asked Abhinav Johri, a software engineer and competitive coder for his opinion on the two platforms -- he says that HackerRank has a wider, global appeal, but there are plenty of other, international websites that are popular."The #1 platform is Codeforces," says Johri. "The concept is a little different - companies don't come to them for hiring. People compete because they like competing." Other platforms in the competitive programming space include spoj.com, topcoder.com and codechef.com, while Gurgaon-based mettl.com provides a platform to run aptitude and psychometric skills of potential candidates, apart from technical tests.

The old ways are slowly changing
Gupta reckons that campus recruitment will continue to be a means of hiring the masses, but the way it is done will evolve over time. He sees online coding challenges eventually replacing traditional interviewing methods, as companies want to hire developers who are completely hands-on with their programming skills.

"The other important factor is that only a finite number of colleges can be visited by any organisation," he explains. "With more than 4,000 engineering colleges in India, coding challenges are a very effective means for companies to reach out to the vast untapped pool."

HackerEarth has a volume-based pricing structure - starting at Rs. 125 per candidate -that offers tools to assess an existing pool of candidates, or for companies to issue challenges to HackerEarth's community, which is now at around 500,000 users.

For large companies, these platforms save a considerable amount of screening time. Once the exam is done, these platforms generate a report almost instantaneously; the recruiter can choose to call the top 10 or the top 20 candidates.

"The report gives all the insights a recruiter needs," says HackerRank's Harishankaran. "You can playback a candidate's code to see how much time they took and what their approaches were, how optimal the code was." He cites a VMware case study that shows how the company slashed screening time by 75 percent. 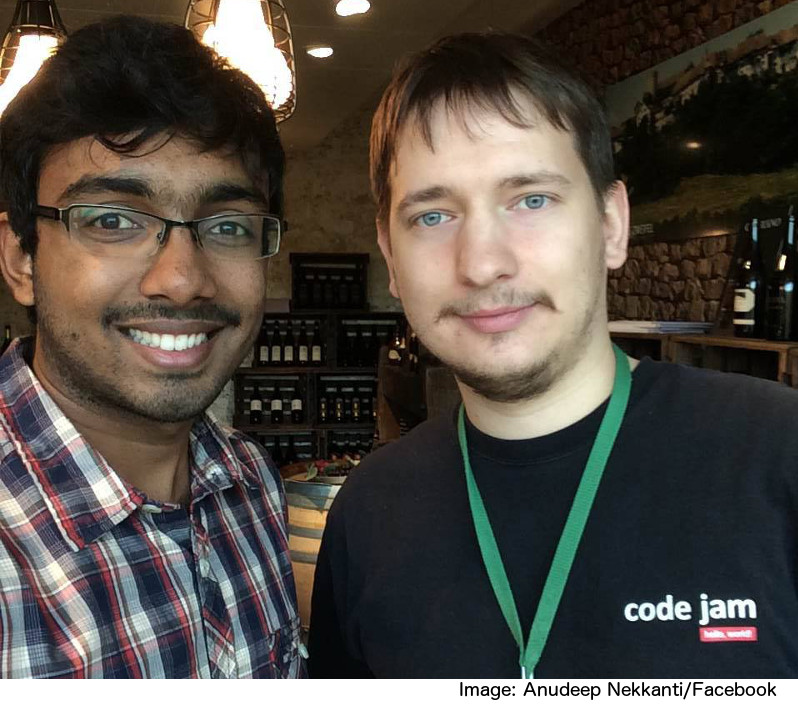 Follow the leaderboard
Competitive programmers have their own leaderboard to show off their mastery, and is one of the best ways to spot an 'outlier' - the mythical 10x programmer who has the discipline, skill, commitment and passion to be a valuable asset to any tech firm.

Anudeep Nekkanti (left) is one example of how much tech companies vie for prized coders - a B.Tech computer science student from Anil Neerukonda Institute of Technological Science, in Visakhapatnam, Andhra Pradesh, he landed an offer from Google, Zurich in 2014, based on his online scores in the competitive coding arena. As legend goes, he refused Google's offers to place him in London, Bangalore, or Hyderabad, and he was okay with being rejected by Google too. "70 days after my onsite interview I was finally given Zurich,"  he writes in a Quora thread.

On average, outliers get paid more than twice their peers - while freshers can expect to get an offer ranging from Rs. 6 to 10 lakhs per annum, outliers can earn up  24 lakhs, says Gupta. Coders with 1-5 years of experience make between 12 to 30 lakhs per annum, while outliers make over 50 lakhs, he adds. Those with above five years of experience move to the product/ project manager category, and their salary ranges go up to a different tier. In general, developers are getting paid more than they used to, Gupta says.

We quizzed these companies for programmers worth following. Harishankaran dropped the name of 'anta', a young Japanese hobbyist programmer from Japan who is some kind of a legend. His profile can be found on all the major competitive coding websites, and he refers to himself as 'NEET' because he is NEET ("Not in Education, Employment, or Training"), according to this Quora thread. 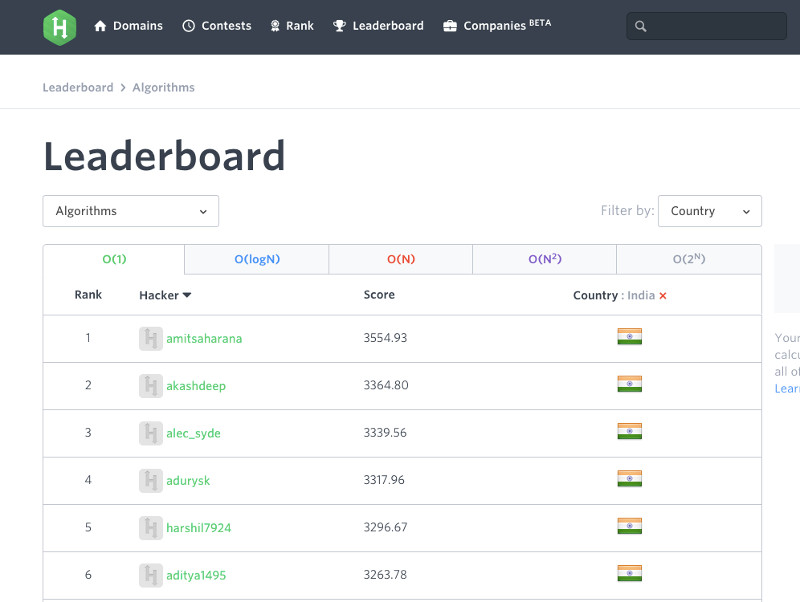 According to Johri, the world's best programmer by far is Gennady Korotkevich (aka tourist), followed closely by Petr Mitrichev. He also names some aspiring competitive coders to look up: Lalit Kundu, Devansh Gupta and Akashdeep Nain.

Tapping into the genius of the crowd
A hackathon has become the de-facto method for companies to interact with developers. Many programmers with corporate backgrounds are taking part in hackathons to learn and practice, and many top corporations use hackathons for employee engagement programs, or solve their problems. One of the best examples of this is Netflix's million-dollar challenge.
Netflix posted an open challenge to any developer from around the world. Programmers were asked to increase the efficiency of their recommendation engine, with a million dollar prize for the winner. Programmers from around the world participated and Netflix derived a lot of developer branding from it. Also, the winning entry greatly improved its recommendation engine.

Then there are bounty programs, API hackathons, and events like Google Code Jam, Facebook Hacker Cup, and Yandex cup, which feature in the developer event calendar.

Hacker and hackathon culture in India is different from how it works in the West. Here, hackathons don't take place in large arenas where people gather together, creating a mass LAN party of sorts, but rather in small groups of less than 50. Online, freed from logistical burdens, these hackathons scale to a size larger than most cricketing arenas - HackerRank's EpicCode CodeSprint pulled in about 64,000 submissions from over 12,000 participants from 86 countries in June this year.

UIDAI recently conducted a large scale hackathon on HackerEarth, where it opened up its authentication APIs (including the biometric ones) for developers to use and build solutions with. The three physical venues - the PayTM office in Delhi, NASSCOM Start-up warehouse, and Microsoft Ventures in Bengaluru could accommodate up to 40 people each. Online, over 5,200 developers participated in the hackathon, working on using Aadhaar APIs for a wide range of solutions, from financial services and payments and healthcare.

Hackathons have seen a massive upsurge in India the last 3-4 years, Gupta says, and most of it can be attributed to the growing startup culture taking root in the country. Many startup founders were exposed to the valley's culture of hackathons and they brought it back to India.
"Hackathons are becoming mainstream now, from both a company and community standpoint," says Gupta. "It wouldn't be going too far to call startups as one of the key custodians of the hackathon."