The startup-within-a-big-company is a narrative that's becoming increasingly popular, but Sohel I S, CEO of the property portal HDFC RED, feels that six years on, the mindset genuinely applies to his organisation, where the average age of the team is still 28.

"We're able to make decisions quickly and don't have to go through so much hierarchy and we've had to be very fiscally responsible," Sohel tells Gadgets 360. This also helped the company have a relatively narrow focus from the beginning, something he says helped a lot.

While many of the best known companies in the property space in India got their start in the rental market, HDFC RED stayed out of that segment, focused instead on the buying and selling of private homes from the beginning.

Last year, Housing.com announced layoffs and shut down its rentals; visit most of the other popular sites and the first option you now see is "Buy". In some ways, RED was ahead of the time when it launched and Sohel sees the current trend as a validation of its business model.

"When we were getting started we talked about what all we should be doing, and we were clear that we aren't going to try and do everything at once," he says. "The problem with rentals is that there is a lot of demand, but the supply is very erratic. You're spending money to acquire each listing, but that money is only good for about three weeks. In that much time, any house which is in a decent condition, where the rent is reasonable, goes off the market."

"On top of that, the listing will be there on a dozen sites, and you're all spending money to improve the quality of the listing and bring information," he adds. "It's just not really practical."

On the other hand, the supply side for selling houses is a lot better, he explains. For one thing, builders are ready to pay to be on the platform. Additionally, you're capturing the data for an entire project and not just a single house. And of course, the listings are live for a lot longer, so the money that is spent on getting and maintaining them is a lot lower in the long term.

Additionally, Sohel continues, the builders themselves are very enthusiastic about adopting technology. It’s a cost effective way to grow, and in a market where buyers are often not purchasing locally anymore – buying property in their hometowns while living elsewhere, for example – technology becomes essential to finding homes.

And this is bringing about a big difference in the way buyers and builders are using technology. “Six years ago, people were worried that you wouldn’t buy anything online,” Sohel continues. “But when I saw people start to buy clothes online, I knew that this was possible.”

“Today, we use video conferencing for discussions, VR tours of the building to give you a 360-degree view of the apartments,” he adds, “and it’s been stopped now, because there’s not much clarity on what you can and can-not do with drones, but we were doing some really great things, like using drones to shoot the view from every window on every floor of the building, so you can decide if the 15th floor is right for you or the 20th.” 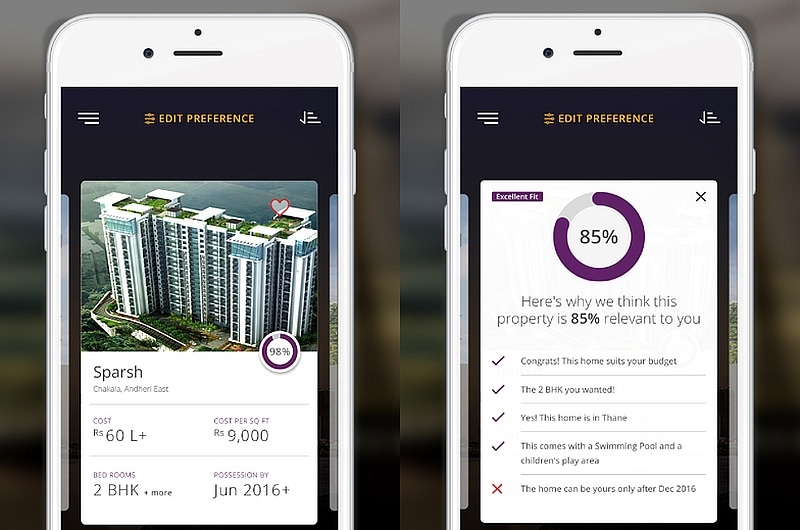 But all of this barely scratches the surface of how technology has been changing the real estate business according to Sohel. The real game changer, he believes, is artificial intelligence. “Machine learning has been moving too slowly if you ask me, mostly confined to the lab, but it’s a real game-changer,” he says. “Right now, there is a lot of data. And not much of it is useful to everyone, and it’s presented in a way that makes it hard to find the information you require.”

“What we can do is improve on the presentation of data to help you find the houses you need more easily. The next thing we do is congruence, where we help you to fine tune the data and come up with a filtered list that suits you,” he explains. “Then there are recommendations, where we can actually say we know what you like, we know what you really want, and these are the houses you should look at.”

HDFC RED has applied for a patent for its recommendation engine, and it uses everything from social profiling, to demography-based suggestions, but he admits that this is one area where further improvements are required. “I mean imagine if we know the kind of music you listen to, and what music other people like,” he says. “Maybe if we know that you’re someone who likes to listen to rock music, you’ll be better off with neighbours who like it too, so they won’t complain about your music playing late, right?”

It’s a slightly far-fetched notion, as he quickly admits, but it does show some of the ways in which the real estate business in India is changing. “Things like having an app for your property to showcase it, which then becomes an internal social network once the houses are sold,” he adds, “or setting up a VR zone to demo houses instead of having people come to the project unnecessarily, this is moving from being high tech to just hygiene.”

“By 2020, the digital natives, the ones who grew up with the Internet, will be buying houses,” he says, “and right now, we’re taking care of the search part of the equation. By then, you’ll have to have solutions for site visits, negotiation, payments, and paperwork for these buyers.”

Further reading: HDFC, HDFC RED, Property Search, Real estate, Housing.com
Gopal Sathe Email Gopal
Gopal Sathe is the Editor of Gadgets 360. He has covered technology for 15 years. He has written about data use and privacy, and its use in politics. He has also written extensively about the latest devices, video games, and startups in India. Write to gopal@ndtv.com or get in touch on Twitter through his handle @gopalsathe with tips. More
Pebble 2 + Heart Rate Goes Up for Pre-Orders; Pebble 2 SE to Become Available in November
DGCA May Issue New Advisory on Samsung Galaxy Note 7 Phones