Have an Idea That's 'Made for India'? Intel and Government Will Pay You to Develop It 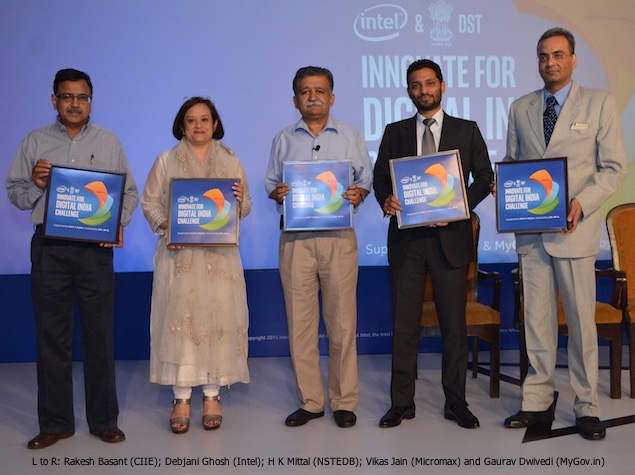 "India has some of the best brains today, but we are using them to solve the world's problems." Not many would disagree with the statement by Debjani Ghosh, Vice President, Sales and Marketing Group & Managing Director, South Asia at Intel. In an attempt to address this imbalance, Ghosh and Intel have partnered with the Government's Department of Science and Technology (DST) to launch the Innovate for Digital India Challenge, which is looking to provide mentoring as well as financial incentives to encourage Indians to solve local problems using technology.

While smartphone penetration is on the rise in India, most people end up using their devices for Facebook, WhatsApp, and other activities like listening to music. Ghosh believes our phones - and technology in general - should be able to play a greater role in making our everyday lives better.

One of the challenges in this area is that many apps continue to use English as the primary language in their UI, which hinders adoption in a country like India where not everyone's comfortable with English, and many are not able to read at all.

"Bringing down the cost of devices alone is not going to suffice," says Ghosh "You can give the device for free, but if you don't know what to do with it, if it's not relevant for you, you are still not going to use it."

Another area where smartphones are struggling to make a "meaningful" impact, Ghosh believes, is connecting people with their local government programmes and/ or initiatives that may be useful for them.

"We have identified two areas that we believe are going to be critical to move the needle," says Ghosh. The first area that Intel & DST's challenge is focusing on are ideas that "drive mass adoption of technology such as biometric sensing capabilities, peripherals using other sensors, intuitive user interface, gesture recognition, and multilingual and voice support." This directly links to the problem of moving beyond apps and services that largely have an English-based interaction paradigm.

The second area is to "create apps that accelerate delivery of e-governance services through eKranti/ MyGov apps on mobile platform," which will be able to connect people to several government initiatives that are already underway to improve people's lives.

"The MyGov platform is designed to link government and citizens," says Gaurav Dwivedi, CEO, MyGov. "We are proud to support this challenge by connecting the government with entrepreneurs and innovators to come forward with solutions made in India, for India."

Ghosh's eyes light up when she talks about Godrej's ChotuKool as an example of affordable, "made for India" innovation, and she hopes that Intel can play a role in finding similar solutions for a Digital India. Intel of course has partnered with the Government before on projects like the Digital Skills for India Program that aims to impact the lives of 5 million people by the end of 2015.

What the programme offers
Intel and DST are offering up to 20 individuals or companies prototyping grants of up to Rs. 2 lakh each to kickstart shortlisted ideas. These shortlisted candidates will be mentored in Bengaluru & Pune for a period of up to 12 weeks, at the end of which up to top 10 participating teams will be identified for 8 additional weeks of mentoring and given access to a development grant of up to Rs. 5 lakh per team.

Intel says the participants will be working with partners like TCS and Micromax during the programme, bouncing ideas off them, and even collaborating with them to tap in to their expertise and resources. Finally, a Demo Day is planned for January 2016, where the 10 teams will get a chance to present what are hopefully polished products, with up to three teams having a chance to gain equity investment of up to Rs. 20 lakh each from DST.

Ghosh told NDTV Gadgets that the participants will own all intellectual property (IP) related to the ideas they develop under the programme, which also lists Department of Electronics and Information Technology (DeitY) and IIM Ahmedabad's Centre for Innovation Incubation and Entrepreneurship Cell (CIIE) as its partners. Professor Rakesh Basant of CIIE says, "We are excited to collaborate with the government and Intel to create a platform for young innovators across the nation to showcase their ideas and support them in their journey from ideas to products."

The programme had received nearly 450 submissions at the time of filing this report, and you have time until 6PM IST on 22nd June 2015 to submit yours.