Bangalore is facing a garbage collection crisis, and today, fleets of trucks and thousands of ragpickers are employed in the worst conditions possible to try and keep the city clean. Bangalore-based IT company Mindtree wants to make it easier for people to get their garbage removed, and to improve the conditions of the ragpickers at the same time.

I Got Garbage, a project that Mindtree initiated, wants to apply business management practices to the ragpickers, so that they can maximise their efficiency (thus reducing the amount of garbage piling up) and also their profits, by selling recycled waste to the right dealers. While there are NGOs that help ragpickers, the company wanted to build a system that is scaleable and sustainable.

"NGOs worked with around 100 or at the most 500 ragpickers," says Prashant Mehra, AVP, Social Inclusion, Mindtree. "Also since the incomes were very less, unwittingly the entire family, which included the wife and children, had to take the profession up. Somewhere that had to change."

His goal is to bring a cleaner environment to the city, and help the ragpickers become recycling managers.

The project equips the workers with budget smartphones, so they can check the maps and find out where they need to make pickups, while households and offices can sign up on the website to get their garbage collected for free.

Right now, most of us pay cleaners to come collect our garbage on a daily basis. The amount paid is a pittance, and the cleaners have to sort through the garbage to find anything that can be recycled, to sell and earn a living.

If you sign up your house with the project, then you need to sort your waste into two bins - recyclable and organic waste. Your address will be assigned to a collection route, and the garbage will be picked up at no charge.

I Got Garbage maintains a database of all the ragpickers and their locations, and assigns them routes based on maximising their efficiency.

Since the waste is being sorted by residents instead of ragpickers, the waste collectors don't have to spend as much time sorting through garbage, and it's worth losing the immediate income they would get for taking the trash away.

This also means that the recyclable waste is less likely to end up in a landfill, which is a huge benefit for everyone living in Bangalore. The majority of waste in the city is not being sorted, and simply ends up in dumps, according to Mehra.

"It is a problem that needed urgent redressal, says Mehra. "And not that efforts were not being made towards the end, but somehow it was not coming across. Neither was it helping the people, nor the ragpickers."

The website solves this half of the problem, so the garbage leaves our houses, and doesn't end in a landfill.

But for ragpickers, the problem is that after they've identified and sorted through your trash, they have to actually sell it to make a living. But as they have to move around to collect trash, it's often hard to find the right dealers for the materials they have gathered.

Geo-tagging and storing the information on a cloud that is accessible via a budget smartphone costing as less as Rs. 4,000 has helped the process. 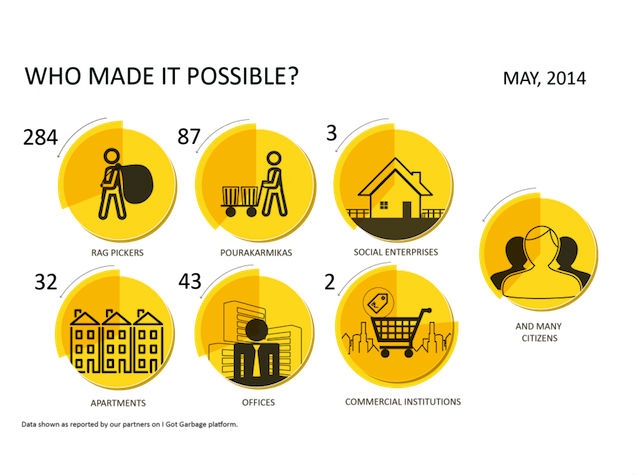 Less sorting, more selling
Mehra began working on creating a database of all the ragpickers as well as the buyers to whom the garbage was sold.

"Bangalore is roughly 850 square kilometres in area. It consists of 190 wards, each around four square kilometres in size. So we first began segregating the areas based on the PIN codes and how heavy or light the garbage flow in the areas were," says Mehra. "Once the databank was created, we included the data of the rag pickers [who now number in excess of 5,000] and the petty dealers who purchase the waste from them. Also the ragpickers themselves are separated into the waste pickers and sorters."

The database, which was developed in-house at Mindtree makes use of open source technologies.

"A ragpicker can check the tags to see which buyers are located in his or her area and cut the downtime on selling the recyclable waste to the buyer," says Mehra. "The work time is cut down. There can be more trips made, which results in more money."

This has had a huge impact on the earning potential of the ragpickers, he claims, and says that working for eight to twelve hours a day a ragpicker can now earn Rs. 8,400, almost double of what they made before. 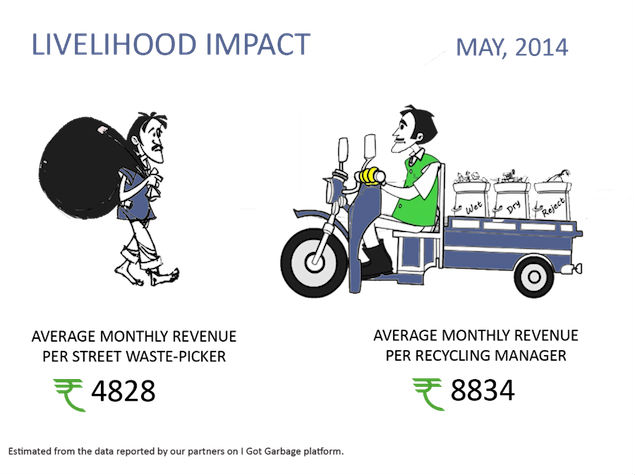 A year and over 5,200 ragpickers later, Mehra says that expansion is on the cards but not in the immediate future.

"We cannot expand when we know that the project still has a lot of improvements to be made. More than that it would be wrong to say that we want to move to cover all the 1.5 million ragpickers in the next year. We will get there eventually. Right now the focus is on making this a perfect model."