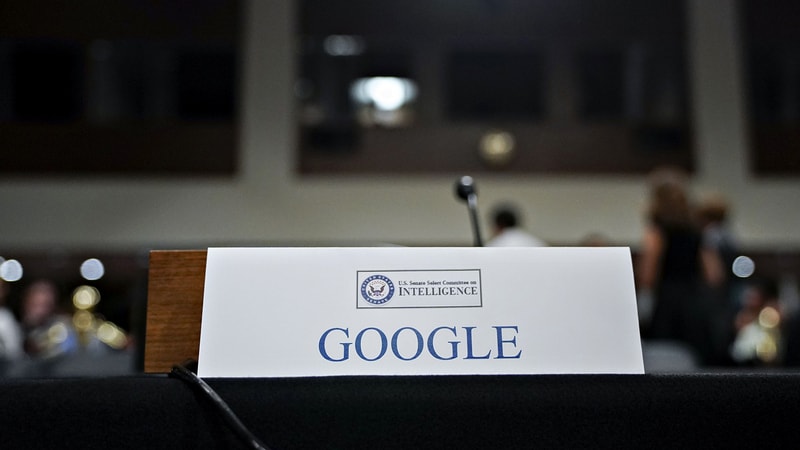 A Google placard on the witness table before a Senate Intelligence Committee hearing in Washington, US

Google, faced with what may be the most intense political scrutiny in the company's 20-year history, decided to pass on a chance to defend itself in Congress.

A Senate Intelligence Committee panel was convened Wednesday morning, the latest in a series of high-profile hearings on state-sponsored election meddling involving the largest technology platforms. Senior executives from Facebook and Twitter sat before the senators next to an empty chair marked "Google." The biggest unit of $837 billion (roughly Rs. 60 lakh crores) Alphabet opted to bear the blowback of a vacant seat rather than send its reclusive founder, Larry Page, or his handpicked successor, Google Chief Executive Officer Sundar Pichai.

The session was meant to focus on the decisionmakers following a grilling last fall of the tech companies' lawyers. Twitter CEO Jack Dorsey and Facebook Chief Operating Officer Sheryl Sandberg accepted the Senate's invitation to testify. Since the hearing was focused on the vulnerabilities of social media, those two executives were bracing for a bulk of the questions.

Still, Google refused to send Page, who now runs Alphabet, or Pichai, whom the Senate said it would accept. The panel rebuffed Google's offer to send its legal and policy chief Kent Walker. Google's decision could damage the company's standing in Congress, where it has enjoyed strong bipartisan support for years as a good corporate citizen.

"After investing so much in lobbying the last several years, this is bizarre," said Adam Goldberg, partner with the Washington, DC-based communications firm Trident DMG. "If you're not at the table, you're on the menu, and Congress looks hungry."

Sen. Mark Warner of Virginia, the ranking Democrat on the committee, blasted the company in his opening remarks, citing the persistent conspiracy theories spreading on Google search and YouTube, and state-sponsored attacks through Gmail.

"I'm deeply disappointed that Google - one of the most influential digital platforms in the world - chose not to send its own top corporate leadership to engage this committee," he said. "Given its size and influence, I would have thought the leadership at Google would want to demonstrate how seriously it takes these challenges and to lead this important public discussion."

Google's glaring absence occurs as lawmakers apply increasing pressure on the tech giants to explain Russian interference in the 2016 presidential campaign, and all eyes are now on the upcoming midterm elections in November. The companies are also being accused by some Republicans of anti-conservative bias and by politicians of both parties for abusing their dominant platform positions.

Steeped in an antitrust fight in Europe, Google now is facing calls from lawmakers in both parties for regulatory enforcement action. The Senate hearing comes a week after President Donald Trump singled out the search engine, accusing it of tweaking news results against him, although he later backtracked claims he was demanding regulation against the company.

"It's indicative of Google's both dominance and arrogance," said Jason Kint, head of the publishing group Digital Content Next and a frequent Google critic. "They think they can blow off the US Senate without consequences."

Page's no-show is not a surprise for people who watch the company. He relegated all oversight of Google to Pichai in 2015 after the formation of Alphabet, an umbrella company for his interests beyond the web business. Even when he was Google CEO, Page deferred political matters to Eric Schmidt, the former chairman who stepped down from the company last year. And Page has shrunken further from the public spotlight since Alphabet began; his last public interview was in the fall of 2015.

Pichai's absence is more troubling for the search giant.

Republican Sen. Marco Rubio of Florida said on Wednesday that Google's no-show was "maybe because they're arrogant." Google's policy staff was well aware of this perception. Once the Senate made its requests for the top executive clear, several people at the company expressed disappointment that Pichai declined to attend, according to a person familiar with the company. The person asked not to be identified discussing private matters.

Pichai, a one-time product manager who rose quickly through the executive ranks, is known for his diplomacy internally. But he often avoids head-on controversy, steering clear of weighing in publicly on thorny issues the company has faced, such as ideological bias, inappropriate content on YouTube and plans for China. He acquiesced earlier this year to demands from some employees that the company end its cloud contract with the Defense Department, which some people at Google interpreted as an aversion to conflict, said the person familiar with the company.

A Google spokeswoman said on Tuesday that the company has briefed the committee members "numerous times" on its work to prevent foreign interference in elections, an effort that the company says falls under Walker. "We had informed the Senate Intelligence Committee of this in late July and had understood that he would be an appropriate witness for this hearing," the spokeswoman said in an emailed statement.

The committee either changed course or never agreed. "If you don't want to be part of the solution, don't send somebody," North Carolina Sen. Richard Burr, the committee's Republican chairman, told reporters on Tuesday afternoon. "I'm disappointed Google decided against sending the right senior-level executive," he said on Wednesday in his opening remarks.

For Google, the Senate decision may be a calculated risk. The bad optics of an empty chair could outweigh being dragged further into a morass that Google may feel belongs to Facebook and Twitter. Google found far less election spending from Russia's Internet Research Agency than the other two. When Walker testified in earlier hearings, the lawyer repeatedly emphasized that Google was, unlike its peers, not a "social network."

Still, the search company has reported uncovering political ads and hacking attempts on its services from accounts affiliated with the Russian and Iranian governments. And Google's YouTube has had problems containing propaganda and disinformation from spreading across its channels.

In his submitted testimony on Tuesday, Walker wrote that Google had "fulfilled all four of our commitments" regarding election-ads transparency from the last Senate hearing."We appreciate Mr. Walker's commentary, but it is not testimony," a spokeswoman for the committee said in response.