At the first Google Cloud Summit in India that took place on the outskirts of Bengaluru on Tuesday, the company formally announced its first Google Cloud Platform Region in India, which will start operations in Mumbai before the end of the year. Google had "pre-announced" this a year ago, but the company reiterated that the Region is on track to go live, an area where it has lagged behind rivals Amazon and Microsoft.

Speaking at the summit, Mohit Pande, Country Manager - India for Google Cloud talked about how cloud technology is changing the pace of innovation. "Cloud, plus machine learning and artificial intelligence is bringing unprecedented innovation, and it is available to anyone, from startups to large enterprises," he said. "We're basically democratising machine learning and AI."

A cloud Region is basically a central hub for a geography, where data storage and computing takes place. Google's Indian customers have made use of Regions in Taiwan and Singapore (among other regions), which, along with Tokyo and Sydney, make up Google's APAC Regions. The Region is further divided into Zones (Mumbai will encompass three Zones), which are further localised; the advantage of having a Region that's physically near is that it speeds up data transmissions, and this can have a large impact on certain kinds of usage.

There are also rules about data sovereignty that require cloud service providers to keep data from being transmitted out of the country, for certain regulated industries and government services. By building a Region in Mumbai, Google will be able to better serve its customers here, build up an ecosystem, and open up to a greater spectrum of partners, Pande added.

Rajan Anandan, Vice President South East Asia and India, Google, was also at the summit and stressed on the growing importance of the Internet in India. He stressed that there are seven Google products in India with over 100 million users each, and that Google Cloud customers get to use the same "high performance and secure" cloud as the company. 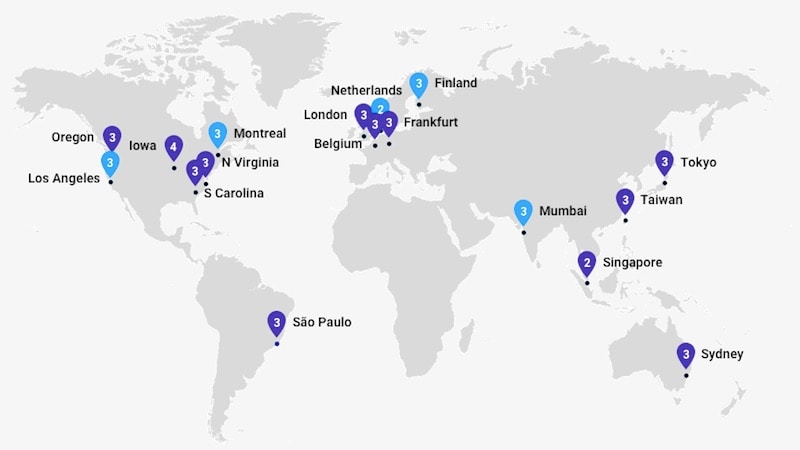 "Ashok Leyland is one of the big customers for Google Cloud, that is working to bring in a technology overhaul, and today you can track their trucks in real time, and they are using an app called Service Mandi that helps the drivers to find the nearest vetted mechanics, with a pre-approved rate list," Anandan mentioned.

We asked Pande how Google Cloud is differentiated from Amazon Web Services, and Microsoft Azure, to which he replied that today, the question isn't one of whether or not to adopt the cloud, which is a foregone conclusion, but rather which cloud to use.

"And as Rajan pointed out, we are a company that was born out of the cloud, with billions of customers," said Pande. "We touch them every day with Google, with Gmail, Android, and YouTube. To make this possible, we have to put together extraordinary resources, and what you get as a customer is that same Google level of quality."

At the same time, the infrastructure challenges of setting up in India must be quite a lot. With extreme heat and humidity, not to mention regular power cuts, just physically keeping the systems running would probably be harder here than other parts of the world, and Mumbai in particular shuts down for long periods every monsoon. However, while Pande couldn't comment on the specifics of Google's set-up for the facility, or how much the company is investing in this project, he reassured that "the end result is still Google-class."

As some reading this would know, the hardware required for such a set-up has to be custom-built to suit needs that are far different from consumer grade requirements. Google is the third-largest manufacturer of computer hardware, said Jonathan Donaldson, Technical Director, Google Cloud. At the same time, Donaldson said, it's also the top performer on price-performance, according to a comparative benchmarking study.

The hardware in Google's various Regions and Zones around the world is connected through overland fibre and undersea cables that Google has installed or leased around the world, and Donaldson talked a little about the "Google Navy".

"We have our own boats that can arrive, and lay the sub-sea cable," he said, "and we also put together our own overland fibre, apart from leasing some bandwidth. According to estimates, about 40 percent of all Internet traffic passes through this network, which is Google end-to-end."

This, he said, offers customers greater security, while Google is also cheaper than alternatives.

Pande also pointed to Google's work in machine learning and artificial intelligence, which can be leveraged by its cloud customers, as a reason for choosing the service over the others. However, so far, Google Cloud doesn't serve one of the biggest customers in the country - the government.

"So far, Google has done a lot of work with the government, as you are aware," said Pande. "And now with the Region in Mumbai going live, we're sure that we'll see that [government projects] also."

Further reading: Google, Google Cloud Platform, Google Cloud Platform Region, Cloud, AI and ML
Gopal Sathe Email Gopal
Gopal Sathe is the Editor of Gadgets 360. He has covered technology for 15 years. He has written about data use and privacy, and its use in politics. He has also written extensively about the latest devices, video games, and startups in India. Write to gopal@ndtv.com or get in touch on Twitter through his handle @gopalsathe with tips. More
Idea Top Executive Throws Shade at Reliance Jio at First India Mobile Congress
Google, Amazon, Intel, IBM Rank in Top 10 Places to Work in India: Indeed