For Tech Titans, Sharing Has Its Limits 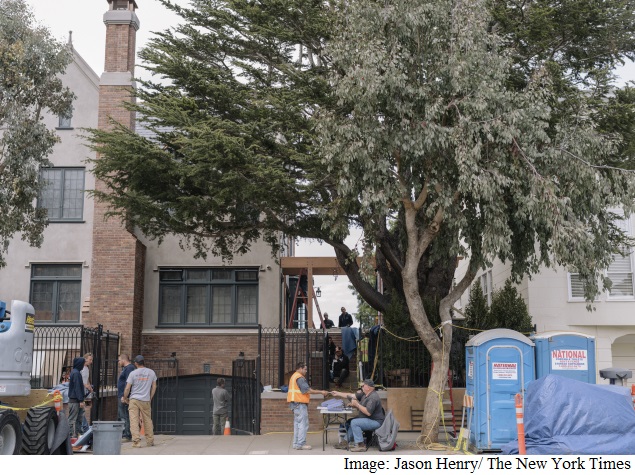 There are all sorts of activities required of the people who remodel the homes of tech titans in Silicon Valley. Laying reclaimed-wood flooring, installing ever-tinier bathroom tiles, wiring the network.

Add a new one: Signing a domestic nondisclosure agreement.

These powerful documents, demanding the utmost secrecy, are being required of anyone associated with the homes of a small but growing number of tech executives, according to real estate agents, architects and contractors. Sometimes the houses themselves are bought through trusts or corporate entities, so that the owners' names are not on public deeds.

Celebrities have often sought confidentiality about their residences. But now, say those signing the NDAs, the secrecy is sometimes sought by people who don't necessarily have their own renown, but who work for well-known tech companies - Facebook, Google, Twitter.

"They are people you've never heard of," said one contractor who asked not to be named because he has signed NDAs 10 times in the last three years when he did remodeling work. He characterized the practice in high-end Bay Area homes as "pretty widespread" with the luxury homes of the technology set. The types of workers asked to sign such agreements, he said, are "across the board: painting, flooring, cleaning, gardeners, landscapers, anything associated with the house itself."

"Sometimes," the contractor said, "you don't even know who the client is. Or it slips out in the duration of the job."

Because people sign legal documents pledging not to disclose any information, finding out who and how many people insist on NDAs is next to impossible. But a recent lawsuit involving one of the biggest names of all - Mark Zuckerberg - has shed light on the home-front NDAs, and the urge for privacy that compels them. Documents in the lawsuit, including ones filed on Wednesday, show Zuckerberg and his representatives seeking nondisclosure agreements. In an email disclosed in the case, a lawyer for Zuckerberg wrote to the opposing lawyer, "As your client knows, Zuckerberg goes to great lengths to protect the privacy of his personal life."

Which adds a wrinkle: Some people requiring nondisclosure are the very ones who have built an industry on its opposite, the disclosure of personal information.

Neil Richards, a professor and privacy expert at the Washington University School of Law in St. Louis, said the NDAs created a kind of "haves and have-nots with respect to information."

Understandably, new tech millionaires might want to disguise their wealth at a time when resentment is rising toward tech workers gentrifying the Bay Area. Call it inconspicuous consumption.

So you won't learn much about the work being done at 21st Street near Dolores in San Francisco from the workers who have spent the better part of two years working there.

On a recent afternoon, I approached a man standing on the block, introduced myself as a New York Times reporter and asked what he was up to.

"Working on a house," he said. He sipped a Burger King soda and smoked a cigarette, and he said he was an electrician taking a lunch break - but that was all he'd disclose.

It was obvious which house he was working on; an anthill of workers swarmed around it, a half-dozen trucks in the street, an orchestra of saws, scaffolding and ladders parked on the street.

"A house down the street." He was vague.

"Are you talking about Zuckerberg's place?" I asked. It's been widely reported that this is his property, though the public record says the owner is SFRP LLC

Had he signed an NDA?

"All the workers sign them," he conceded. Conversation over.

I introduced myself to a guy sitting behind a table across the street from the house. He seemed to be a foreman or at least someone handing out the badges the workers all wore. He said the place was "just a house" and handed me a card with an email address for Facebook public relations, but no name.

A neighbor walking by was more expressive. "It's outrageous," she said of Zuckerberg's yearning for privacy, as well as all the activity on the block. "Look at this privacy. It's been like this for two years. Where's the concern for the neighbors?" Her first name was Sharon, and she said she was a retired, early-generation techie, but declined to give her last name, saying she feared "retribution."

The lawsuit against Zuckerberg involves a different residence, 35 miles south, in Palo Alto, California. In that lawsuit, a part-time developer named Mircea Voskerician claims that he had a contract to buy a $4.8 million (roughly Rs. 30 crores) house adjoining Zuckerberg's residence and offered to sell a piece of the property to Zuckerberg. Voskerician says that in a meeting at Facebook headquarters in Menlo Park, he discussed a deal to sell his interest in the entire property to Zuckerberg. In exchange, he says, Zuckerberg would make introductions between him and powerful people in Silicon Valley, potential future business partners and clients.

Voskerician passed up a better offer on the house, the suit contends, but Zuckerberg did not follow through on the pledge to make introductions.

Documents filed on Wednesday in Santa Clara County Superior Court by Voskerician's lawyer, David Draper, raised the stakes in the case by asking for access to Zuckerberg's net worth. The request is aimed at establishing how much Zuckerberg could pay in punitive damages, should a jury find he committed fraud. But of course, it also would threaten to expose Zuckerberg's personal financial information beyond what is already known about his Facebook holdings.

Draper said he deposed Zuckerberg on Wednesday in a law office in San Jose, California, but declined to comment further. Patrick Gunn, a lawyer for Zuckerberg, said that the lawsuit had no merit and that his client intended to fight it "vigorously."

Voskerician said he signed a nondisclosure agreement as a condition of merely discussing his proposed arrangement with Zuckerberg. The information covered by the NDA "includes, but is not limited to, any and all financial, business or personal information" regarding Zuckerberg. Such disclosure, the contract reads, "would cause the protected parties irreparable harm."

Similar NDAs were signed by other Palo Alto neighbors Zuckerberg had real estate dealings with, according to a person with direct knowledge of the case, who spoke on the condition of anonymity.

Zuckerberg's life has been chronicled in unauthorized fashion in books and other media, most famously in the film "The Social Network." In court filings, Zuckerberg's lawyers have said that Voskerician might try to use personal information about Zuckerberg for personal gain "to publish, sell or otherwise use" the material, say from a videotaped deposition.

In an interview with a blogger in early 2010, Zuckerberg cited changing privacy norms for Facebook's decision to change its default settings so that more data from the site's users would be available to the public, not just friends.

"People have really gotten comfortable not only sharing more information and different kinds, but more openly and with more people," he said.

As users complained, however, Facebook has more recently put a greater emphasis on privacy. For instance, changing default settings will allow photos to be seen only by friends, not the public. Perhaps there's a parallel: Just as Facebook users hope to share their lives only with their virtual networks, so, too, do people who live in a physical house expect their comings and goings to be observed only by their close neighbors.

Chris Hoofnagle, a privacy expert and lecturer at the law school of the University of California, Berkeley, said that while it was noteworthy that data merchants were seeking greater personal privacy themselves, they also may well be on the right track. A nondisclosure agreement, which keeps intimate information from ever getting online where it can spread, "is the sensible thing to do."