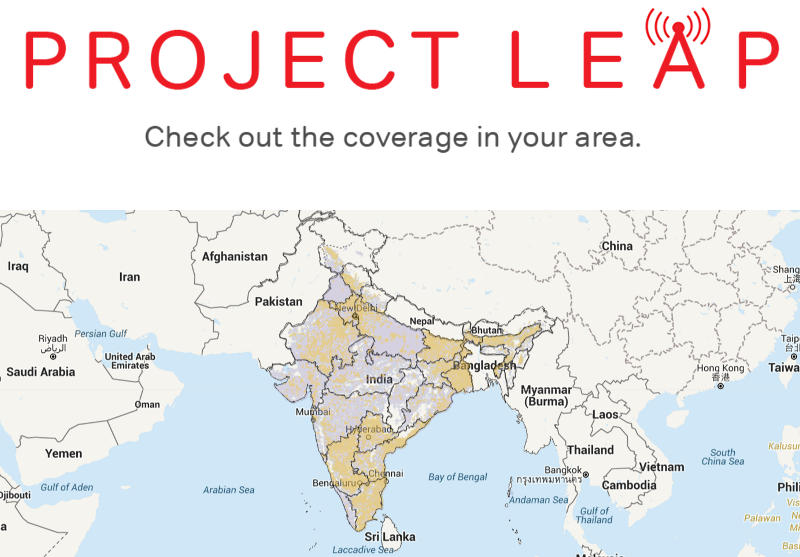 On the Project Leap microsite, Airtel says that its telecom network covers 95 percent of India's population, 90 percent of national highways, and 96 percent of railway routes. Airtel has a total of 2,44,000 sites across the country, out of which 95,000 are high-speed data enabled sites - i.e. capable of delivering at least 3G bandwidth. Furthermore, the company said that it will be adding an additional 26,000 sites by March 2016, out of which 23,000 would be high-speed data sites.

Airtel's data is granular to a state-level, though the microsite seems to designate cities as "towns". Data from North-Eastern states has been clubbed together. There's no data on sites from Jammu and Kashmir, possibly for security reasons, though the website presents heatmaps showing the existence of high speed Internet access in Srinagar, Baramulla, and Anantnag. Kargil and Leh are highlighted in purple, indicating sites that are upgrading.

Airtel has also clubbed together the data for Maharashtra and Goa, Bihar and Jharkhand, Madhya Pradesh and Chattisgarh, West Bengal and Sikkim, Uttar Pradesh and Uttarakhand. Based on the data at hand, we've parsed Airtel's year-end data presented on Project leap to map out which states have the best network penetration, the most number of towns with 4G connectivity, and where its high speed network infrastructure is being installed.

Such kind of granular data can have many potential uses - as a consumer it can tell you whether you should upgrade to a 4G network or a 4G phone, depending on proximity of a data site in your neighbourhood or town.

Internet startups can build their market expansion strategy through these data points. For a second opinion on which telecom carrier is best in your area, and for coverage maps for mobile Internet availability, check out Open Signal, available on Google Play.

With that said, here are 5 quick takeaways from Airtel's Project Leap:

Airtel first launched its 4G services in Kolkata in April 2012, and yet it's the only place in the state of West Bengal to have 4G connectivity. Airtel's 4G rollout seems to be sparse in the north, central, and eastern regions of India - Maharashtra and Goa, clubbed together have the most number of 4G-enabled towns (146), followed by Karnataka, where 100 towns have 4G access. Punjab comes in at third place, with 39 4G-enabled towns. Of course, this doesn't reflect the state of 4G connectivity within the towns themselves.

India's most populous state, Uttar Pradesh clubbed with Uttarakhand have the highest number of Airtel voice and data sites in the country. Maharashtra and Goa come at second place, while Tamil Nadu comes in third, with over 13,000 sites. Airtel has 2,122 voice and data sites across the North East, out of which 1,071 are high speed data sites.

Airtel's most significant investments in new voice and data sites that are coming up by March 2016 clustered around areas in West Bengal and Sikkim, Bihar and Jharkhand, Madhya Pradesh and Chattisgarh. Karnataka has 240 sites coming up. States like Maharashtra and Uttar Pradesh, which already have a high network penetration are seeing less activity, based on data shared on Airtel Leap.

Airtel plans to invest bolster its 3G and 4G telecom network infrastructure in the west of India - Maharashtra and Goa, and Gujarat will see the biggest additions followed by Punjab, Andhra Pradesh and Telangana, and Uttar Pradesh and Uttarakhand.