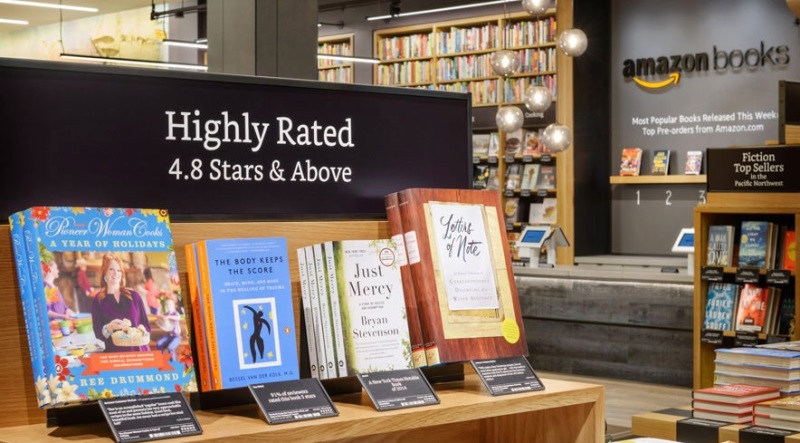 Is the online giant of retail also looking to conquer physical stores?

Amazon has been dabbling in physical retail since 2015, during which time it's opened a half-dozen bookstores that double as gadget emporia, a score of campus bookstores that don't sell books and a convenience store without cashiers. For now, its efforts seem largely experimental, though that may not be true for long.

Although the company already dominates e-commerce, 90 percent of worldwide retail spending is still in brick-and-mortar stores, according to eMarketer. Amazon has the chance to change retail with automation and data-mining technologies borrowed from e-commerce.

"It seems counterintuitive they are investing in any physical stores when they are blamed for the demise of so many of them, but no cow is sacred," says Sucharita Mulpuru, a retail analyst in Charlotte, North Carolina.

Amazon's offline ambitions could even boost Amazon's online operations further, even though they seem to be doing just fine for now. In the first three months of the year, the Seattle company earned $724 million (roughly Rs. 4,650 crores), or $1.48 per share, a 41 percent increase from a year earlier. Amazon soundly beat Wall Street's expectations of $1.08 per share, according to FactSet. Revenue increased 23 percent to $35.7 billion (2,29,306 crores), above expectations of $35.3 billion.

Amazon doesn't break out numbers for its retail-store operations. Amazon Chief Financial Officer Brian T. Olsavsky told investors Thursday that the stores represent "another way to reach the customer and test what resonates with them." He said the company has been pleased with the results, but he didn't elaborate.

Exactly what it's learning, and what it plans to do with that knowledge, is the next big question.

A showcase for gadgets
At Amazon's six physical bookstores - six more are on the way - books are arranged on shelves face out, even though that takes more space. Amazon isn't trying to cram its entire inventory into these stores; Amazon figures you can just order everything else from your phone.

Amazon also devotes a lot of space to its Kindle e-readers, streaming TV devices and other gadgets, so you can try them out before buying. Tutorials are also offered on weekends.

Wedbush Securities analyst Michael Pachter says physical bookstores are good places to win Kindle converts, as "the only people who don't have Kindles who should have Kindles are luddites who also read."

Serendipity
Amazon opened its third bookstore in October, near Portland, Oregon. Miriam Sontz, CEO of Powell's Books in Portland, calls Amazon's entry "an acknowledgement of the inability of the internet to provide a certain retail experience that book buyers enjoy." That includes spontaneous conversations with fellow shoppers on what they're reading, and having a book cover or blurb grab you as you walk down the aisle.

Robert Hetu, a retail analyst at Gartner, says online customers tend to go to a website knowing what they want to buy. By contrast, customers visiting a physical store often make impulse purchases, even if they go in with something specific in mind. Amazon could learn more about that serendipity from its stores, and perhaps find better ways to increase impulse buying online, Hetu says.

Make customers do the work
Amazon is scheduled to open its 20th book-less campus bookstore next week in Cleveland. Students order textbooks and dorm furnishings online and come to these stores to pick them up. The centralised pickup location reduces shipping expenses.

The company is also testing a grocery pickup service at two locations in Seattle. Once it launches, Prime members will be able to order groceries online and visit one of these stores for pickup, skipping the aisles. Crews will even bring orders to the car. It's cheaper than door-to-door deliveries.

Retail technology
Amazon already makes heavy use of robots at warehouses to fulfill online orders. Now Amazon is trying to bring automation to retail. The Amazon Go convenience store in Seattle uses sensors to track items as shoppers put them into baskets or return them to the shelf. The shopper's Amazon account gets automatically charged. The store is expected to open to the public soon, after a test with Amazon employees.

Amazon not only saves money on cashiers but also could use the data to manage inventory better and even assess when to discount items, says Mulpuru, the retail analyst.

Hetu suggests that Amazon might even license its technology to other retailers, the way it rents out its data centers to businesses and groups to power their websites and other digital needs. That business, known as cloud computing, made up 10 percent of Amazon's revenue in the first quarter, as sales grew 43 percent to nearly $3.7 billion.

Building loyalty
Amazon can use its campus locations to promote its Prime loyalty program (students get 50 percent off the normal $99 annual fee). The strategy is simple: Get students hooked, and they'll be customers for life.

As for the regular bookstores, Prime members get the same prices available online. For everyone else, only Amazon gadgets match the online prices; books and other items are sold at an often-higher list price. Of course, you can sign up for Prime on the spot.

Hetu said Amazon could use these experiences to deepen loyalty - though they can also damage Amazon's reputation if it can't deliver an experience Prime members are already used to.

Amazon.in the 'Most Visited and Fastest Growing Marketplace in India', Says Jeff Bezos