India goes to polls from April 7 to May 12 for the 16th Lok Sabha elections. This is the biggest election in history, with 81.45 crores of voters. This year, parties are starting to use social networking, mass SMS and Web-based advertising. That's because the latest data from the Election commission states that each constituency will see almost 90,000 new voters between 18 and 22 years who will be voting for the first time. The number of first time voters is more than the winning margin in 226 constituencies, according to a report.

With the youth of the country increasingly getting their news from digital sources instead of the mainstream media, it's quickly becoming imperative for all parties to maintain a strong and active presence on the Internet. And one of the first places that most people go to when they're trying to learn more about anything is Google. In fact Google even made a formal presentation to the Election Commission proposing a tie up with it for voter facilitation services ahead of the Lok Sabha Elections.

NDTV Gadgets looked at Google Trends data to try and get an insight into the mind of the digital voters and came up with some interesting facts.

These trends should not - obviously - be taken as predictors of election results. People might be looking up a person to refute his stance, for instance. However, it is a powerful tool and an indicator of what people are curious about, if nothing else.

Ever since the AAP came into power in Delhi, more and more people have been searching for them on Google. The 49-day stint in government led by Arvind Kejriwal might have cost them a little popularity, but going by the way people are searching, the party has certainly generated a lot of curiosity, particularly in the urban centres.

The BJP has also managed to grow in search volume, while the Congress has largely lagged behind in searches on Google. The BJP is currently the most-search for of the three parties, thanks to a surge in the last week.

A comparison of the BJP, Congress and AAP in the last three months brings up some interesting results. In the time frame from December 17, 2013 to March 15, 2014, AAP peaked as the highest searched party on January 10, 2014, a period which coincided with the time when Arvind Kejriwal was in power. Now the interest over time graph plotted showcases an alternate rise and fall for the AAP, while the BJP has largely seen a slow rise with a steep rise towards March, while the Congress barring for two peaks towards the end in March has largely seen a fall of sorts.

The same graph when seen for the period of the last 30 days from February 13, 2014 to March 15, 2014 actually highlights the acceleration of searches in favour of the BJP. The BJP has been the most searched for party on March 15. Searches for the AAP started to drop as well, possibly related to the fall of the 49-day Delhi government.

Searches for the Congress on the other hand have remained mostly flat.

In contrast, as the Modi campaign kicked off, the number of searches for the BJP also shot up in response, possibly with more people wanting to know about schedules, venues, agendas and manifestos.

While Google's trends are public data anyone can access, Facebook has also been putting together graphs and information that help understand the interest people are showing in the upcoming polls. The company launched a tool called the "India Election Tracker", a new dashboard that tracks the mentions of candidates and parties throughout the election period, helping gauge sentiment. 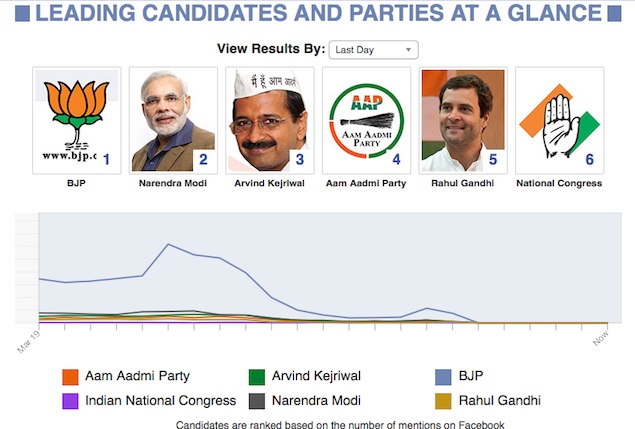 However, there's a small problem with the tracker - it is only measuring the quantity of mentions, and doesn't do any qualitative testing. This means that negative mentions and positive mentions get lumped together. The app doesn't make use of other data Facebook has collected in the past either. The popular social network had earlier partnered with ADR to provide any user information about their politicians using a USSD service. In comparison to that kind of detailed information, the app Facebook has put together feels very limited.

In terms of pure volume though, the BJP and Narendra Modi seem to be far and ahead in the lead, with Rahul Gandhi and the Congress coming in well behind. This is also in keeping with Google trends - we compared the three major party leaders and got fairly predictable results.

Rahul Gandhi has seen random bursts of being the most searched personality (particularly following his first televised interview), whilst largely having a falling interest over the last 90 days from December 17, 2013 to March 15, 2014. On the other hand Narendra Modi has seen a steady graph and is rising in terms of interest generated over the time frame. While the AAP was the most trending topic in the first half of January and February, Arvind Kejriwal's popularity - as far as Internet searches go - has reduced since he stepped down as the Chief Minister of Delhi.

Again, Facebook's election tracker, much like Google's trend data, these inputs don't really predict the outcome of the elections, or give us insights into the way people are thinking, but it does show us at least, what people are searching about, and discussing.