As crackdown on torrent sites continues around the world, people who are pirating TV shows and movies are having to get a little more creative. Cloud storage services such as Google Drive, Dropbox, and Kim Dotcom's Mega are some of the popular ones that are being used to distribute copyrighted content, according to DMCA takedown requests reviewed by Gadgets 360.

What's interesting though is that while at times pirates upload full movies to Google Drive or other cloud services, in other cases, these Google Drive links are empty and just have a YouTube video embedded. The company on its part introduced hash matching, a mechanism to detect infringing content, earlier this year. But as evident from the ongoing abuse, it seems to be falling short.

YouTube videos stream really well even on poor connections, so that makes sense -- but YouTube is also easy to search, and pirated files are taken down quickly, so this is surprising, right? It turns out that the pirates found a simple workaround - the videos are simply uploaded as unlisted, so they don't turn up in search results. The links to these videos are then shared as Google Drive links through discussion forums and other channels so it's difficult for the content owners to find the videos and get them taken down. 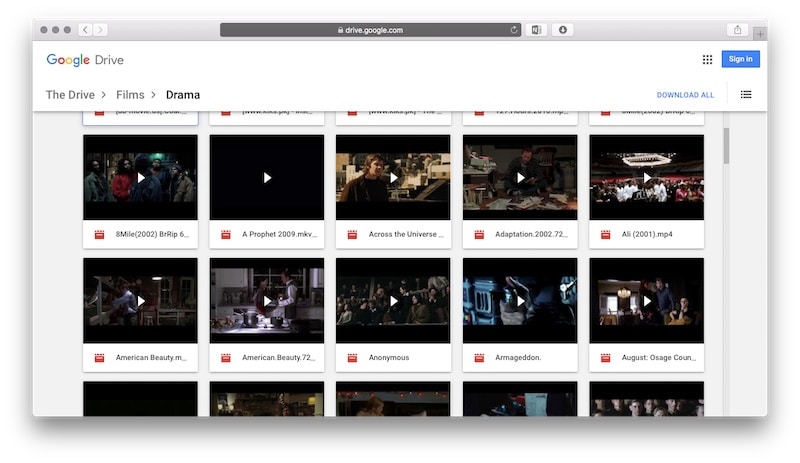 Dropbox, Microsoft's OneDrive, and Mega are no different from Google Drive in this regard, but the volume of takedown notices suggests they are not being used as widely. While there were more than 4,700 DMCA requests to pull Google Drive links last month, only about 100 requests to pull Mega links were filed during the same period. There were less than a dozen requests pointing to Dropbox and OneDrive each.

So why Google Drive?
It's very easy to create a Google account, which can then be used to access a plethora of company's services including Drive and YouTube. Ease of use plays a major part in why people are using Google Drive, says Jon, a resident of Switzerland, whom Gadgets 360 met on a popular piracy discussion board on Reddit.

Google Drive has one of the simplest user interfaces among cloud storage services, Jon - who works in IT services - explained in a conversation over Reddit. It's fairly easy to upload media files (like movies) there, and to create documents that can be shared online. People use these documents to list a bunch of links to other file-sharing websites, and direct links to torrents. The documents can also allow other users to add more links, making it easier to find files. Sharing such documents, or entire media files, is easy too, requiring less than five clicks.

These Google Drive links, as well as links to those of other cloud storage services, are then shared by people on select subreddits, forums, and Facebook groups. Over the past two weeks, Gadgets 360 located over a dozen Facebook groups where people openly share such files and request more movies and TV shows.

These groups on social media are crucial for people who are using Drive to distribute files. There's no search engine to scan through and find relevant Google Drive or entries from other cloud storage services. This makes it hard for copyright holders to find the links, while they remain easy to distribute.

Crackdown on torrent websites
Jon, who didn't share his last name, said people are moving to Google Drive and other services because authorities worldwide continue to crackdown on torrent websites and other file sharing services. In the last two years, KickassTorrents, ExtraTorrent, Shaanig, Yify Torrents and other websites, which together heydays used to garner over 500 million unique visitors (according to web analytics firm SimilarWeb), have all shut down.

Moreover, Internet service providers are increasingly making it difficult to access the few torrent websites that are still in operation, Jon said. "You've got to be part of a private tracker, public torrenting is over," he told Gadgets 360. Private torrent tracking websites usually require users to be invited — which in itself is a difficult process.

There are several publicly accessible torrent websites that continue to exist, but "torrenting" is getting more difficult by day, multiple people told Gadgets 360. Public sites are mired with pop-up windows filled with ads trying to sell them malware, which makes it a poor experience.

Perhaps the most creative pirates
The most unusual service that is being abused for distributing content that we came across is My Maps. It's a feature Google introduced in 2007 to enable users to create custom maps. Anyone can visit the My Maps website, and create a custom map by pointing to a location on the map, adding a title, and filling up a description box. Google doesn't verify what kind of information users are sharing in description, so you can again easily share links to unlisted YouTube streams, or Google Drive files to download. What this means is that people can then share locations on maps, which lead to the pirated movies. 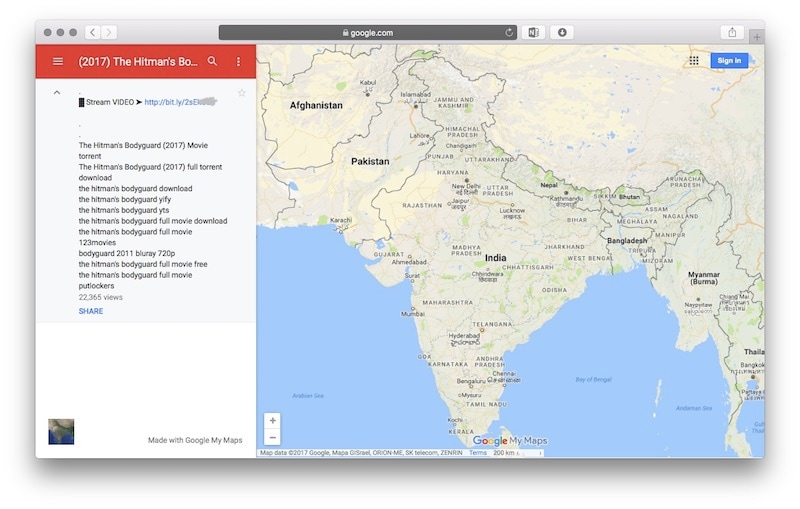 "We try to do our best to protect the producers and video distributors but of course finally it is up to Google," he told Gadgets 360.

"Generally speaking on the Web, crooks can do everything and they do not need to prove their license to distribute the content, but right holders must fill a lot of formalities and even then, some cases are going in favour of crooks. That's the life on the Internet. Burden of proof is on us all the way," he said. On its part, Mandre said, Google does swiftly respond to take down notices. The company has also made it much easier to file such requests. On YouTube, for instance, one can find the ability to contest ownership of the content on every video.

In a statement, a Google spokesperson said the company takes copyright infringement very seriously, but declined to share more. "It's against our policies to post copyright infringing links or content. Rightsholders can and do notify us when copyrighted material has been posted and we work quickly to review and take action on those notices."

With Torrent Sites Facing the Heat, Pirates Get Creative With Google Drive and Other Services
Comment