CES 2017: Amazon's Alexa Emerges as One of the Big Winners 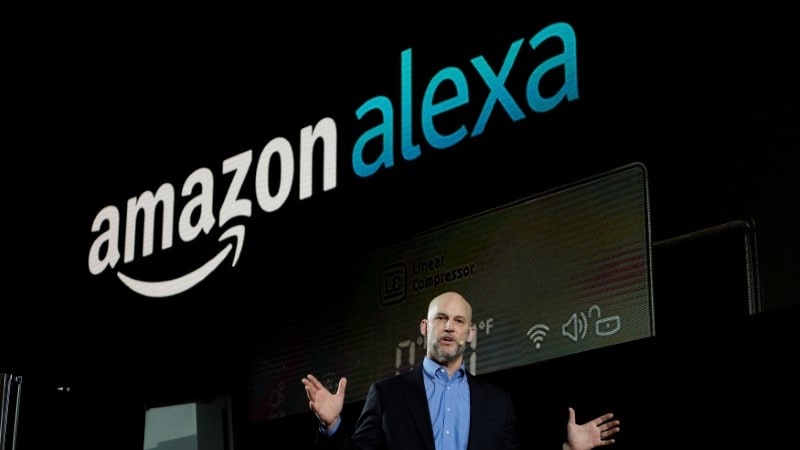 Amazon's virtual assistant Alexa is emerging as one of the big winners at this year's Consumer Electronics Show, cropping up in TVs, cars, fridges - you name it - in what may signal a breakthrough moment for the smart technology.

Alexa's voice-activated artificial intelligence tool was everywhere at the annual tech gathering in Las Vegas - a closely-watched testbed for the latest industry trends - even though Amazon was not officially taking part.

Tech giants Apple, Samsung, Google and Microsoft are all vying to develop the most sophisticated connected assistant - but the dominance of Alexa at CES 2017 suggests Amazon is winning the race.

It may also be the sign that smart home hubs - heralded for years as a coming consumer tech revolution but slow to catch on in the marketplace - have finally come of age.

To name just a few of her appearances at CES, Amazon's Alexa is integrated into the LG smart refrigerator, allowing consumers to "talk" to their fridge to find out what food is on its shelves and order fresh groceries.

She features on three different Chinese television brands made by Tongfang Global Ltd.

She will be present on Huawei's new flagship smartphone and integrated into Inrix's Open Car platform for connected vehicles. Ford also announced this week it would integrate Alexa in its on-board electronics.

Alexa made its debut as the heart of the Amazon Echo - a family of Internet-connected speakers that answer questions, run apps, and let people get weather reports or order goods on Amazon.

The technology was first seen as a curiosity.

But Amazon claims it has sold "millions" of the Echo devices - with a big spike over the recent holiday period. And by opening the system to third-party developers, Amazon is making big strides toward boosting its presence in the consumer electronics space, say analysts.

Now Alexa can be used to play music, order food, summon an Uber ride, dim the lights or provide directions, among other things.

While the company is working on its own artificial intelligence program, Lenovo chief technical officer Yong Rui said Alexa "is one of the best assistants in the US market and the rest of the world."

He expects the collaboration "can amplify each company's strengths."

Connection point
Bob O'Donnell of the consultancy Technalysis Research said Amazon appears to be making progress in integrating the vast array of connected home devices that use different operating systems.

"Alexa is becoming the de facto central point for all these devices," O'Donnell said.

"The devices can't talk to each other but they can talk to Alexa. That puts Amazon in a powerful position."

Even more remarkable is that Amazon has been able to raise its profile without its own operating system or smartphone - having killed the weak-selling Fire phone.

O'Donnell said that Alexa, because it is based on voice, "is like a mega-OS (operating system), it sits atop the operating system," which allows it to integrate with a variety of devices.

Ben Thompson, a technology analyst who writes the blog Stratechery, said Alexa is a strong contender to be a dominant home hub operating system.

"There was an ecosystem to assemble: more and more 'smart' products, from lightbulbs to switches, were coming on the market, but nearly every company trying to be the centerpiece of the connected home was relying on the smartphone," Thompson wrote.

"Alexa... has all of the qualities of an operating system you might expect: All kinds of hardware manufacturers are lining up to build Alexa-enabled devices, and will inevitably compete with each other to improve quality and lower prices."

Alexa's rivals
Amazon and Alexa are still facing fierce competition and not winning all battles.

At CES, computer chipmaker Nvidia said it would use Google Assistant for its interactive streaming devices. Microsoft's Cortana will power a voice-assistant speaker for kids and families being introduced by Mattel, and will also be in Renault-Nissan's connected car hub.

Many smart devices for the home also integrate with Apple Home Kit, which uses the iPhone maker's artificial intelligence and voice assistant Siri.

At CES, Chinese giant Baidu showcased its own virtual assistant "Little Fish" which will debut in China this year.

But many others are adopting Alexa, including the Chinese robotics group Ubtech, the home audio group iHome and Dish Network for its digital video recorder.

'Thrilled'
Amazon has no exhibits or events at the Las Vegas extravaganza, but the company's head of Alexa, Steve Rabuchin, made a brief appearance at a CES keynote with Huawei.

Rabuchin said that by opening up the system in 2015, "this lets developers add new skills to Alexa" to make it more useful.

"We continue to be thrilled with the response we are getting from developers and the momentum of Alexa," he said.