One of the common problems we face when booking movie tickets in advance is that we don't really know what we will be doing the day of the show - what if we book the ticket for next Friday and something really important comes up on the day and we can't make it? Since movie tickets are non-refundable, we often have to choose between making a commitment days in advance, or leaving things until last minute and risk missing out on the movie.

It turns out that we're not alone, and quite a few people don't book tickets until the last minute. To cater to all of us, BookMyShow is looking into a new feature, that lets you "reserve", or block seats without paying, Anish Tripathi, AVP Product Design, BookMyShow told Gadgets 360.

Once you've reserved the ticket, BookMyShow will "send you reminders until a couple of hours before the show, at which point if you still don't complete the booking, then you lose the ticket," Tripathi explains. The feature has been tested in a few cinemas, he says with positive results. It's something that he hopes BookMyShow will be able to roll out fully soon.

BookMyShow has long been the sole name that people think of when they are looking to book movie tickets. The truth is that there are several other players in the category - from the cinemas themselves, to various third-party companies that work like BookMyShow. In March this year, Paytm entered into the movie ticket booking space as well, and it's offering big cashbacks on tickets to get people on board. BookMyShow doesn't have similar offers, and Tripathi offers a rehearsed statement when the question comes up: "We're not looking at what others are doing, the focus is on how we can improve the product, and we're looking at new features."

We're sitting in the canteen on the third floor of the BookMyShow office near Church Street in Bengaluru, and Tripathi has heard this question many times. He's keen to talk about what his team has been doing, and how design thinking is evolving BookMyShow. One of the first things that he tells Gadgets 360, with a grin, is that the "Showcase" roadblock ad on the mobile app is on the way out. "A lot of people did not like it, and we've been working with more native advertising to solve this problem, so that it doesn't affect the user experience," he says. Now, if you go into the tickets section of the app, you could see a movie's poster instead of the movies logo. "We want people to sponsor the category, so then it's great for them because your movie is the first anyone will see, but it doesn't get in the way of the user anymore."

According to Tripathi, the design changes at BookMyShow have led to fewer customer support queries, and more conversions. The company is experimenting with a number of features that it will go about implementing after rigorous feedback sessions from their 'Secret Society' of users. To quickly build prototypes that can be tested, the BookMyShow design team goes into Lockdown - where the team moves in and works to come up with ideas and build new features.

"We're looking at doing a lot more content, a lot more trailers and things like that," adds Tripathi. "User reviews and ratings are another kind of important content. With Jungle Book we got more reviews than any site I checked - it was huge in India, in Hindi and other languages - we all grew up watching that cartoon and so there was a crazy amount of interest."

"We're also looking at a lot of other features. Like the minimap in zoom - for some event venues, the seating is too big to just show the zoomed out map when you're trying to pick your seat," he continues. "But then, you aren't sure of how it fits in the overall stadium anymore. So what we did was, as you're scrolling around the zoomed in map, you see a minimap in the corner that shows the full layout."

"Then we were thinking - wouldn't it be cool to tilt the view 45-degrees, and give like a map showing the elevation as well," he adds, "but then we realised that Google is already working on something along those lines, so maybe we'll integrate with that. There was another idea we had, which I don't think we should do, but one of our team wanted to take a 360-degree shot from the seats, so when you're booking a seat, instead of imagining how far the screen is, you can go into a VR view and take a look around to decide if you want a particular seat." There are also unexpected successes, like the quirky design of showing bigger vehicles on the booking page, depending on the number of seats you want. 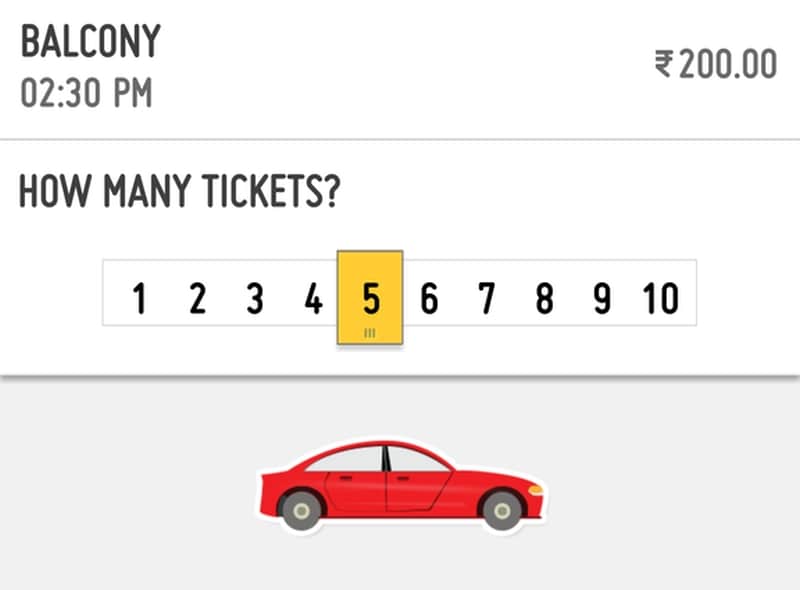 While features like VR views are attention grabbers, companies like BookMyShow need to venture into smaller towns and cities now in order to sustain their growth. Tripathi says that BookMyShow has been working on different screen sizes, and payment methods. "Payments are the most exciting part of the picture right now," he says. BookMyShow has widely adopted a variety of payment methods, as we discovered when looking at different wallet services in India, and it also uses pay later services such as Simpl.

"I think design plays a very big part of what we do, it's a part of the overall thinking," says Tripathi, "and it's seen some successes. I think the move to responsive was a huge game changer, made the browser experience so much better. And another change we already made that was a big hit was the open seat layout."

"Earlier, you picked the cinema, then the movie, then the time, then the class of the seat, and then you saw the seats," he explains. "If you wanted to change the time or the class, you had to start over from the beginning. Now when you are booking, it shows you the seats in all classes, and lets you change the selection live, so it's a much smoother experience, and users responded really positively."