Barbs for Bezos but Bill Gates Largely Admired in Seattle 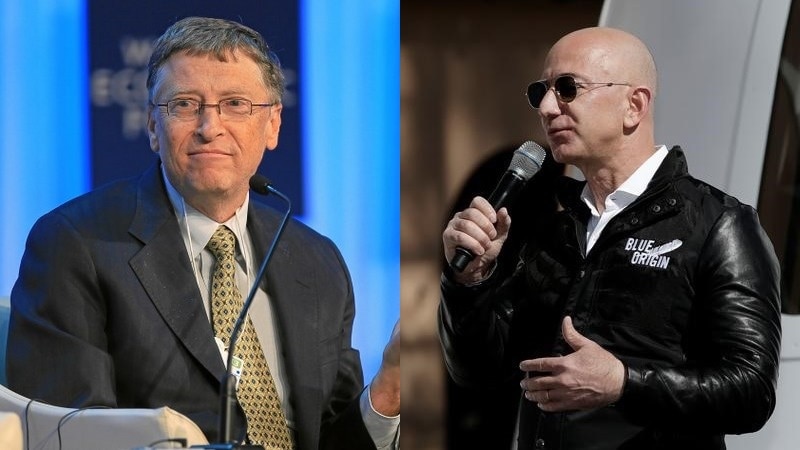 The Seattle region is home to America's two richest men, but their local legacies to date represent two very different eras for the city.

While Amazon's Jeff Bezos is blamed by some for rising rents and clogged city streets, Bill Gates is largely admired for helping lead the computing revolution and donating billions through his philanthropy.

Microsoft was the first tech company to dramatically change the region's economy as it grew quickly in the 1980s and 1990s. Today, Seattle is booming again with housing prices skyrocketing thanks to online retail giant Amazon's explosive growth that has added tens of thousands of well-paid workers to the area.

Bezos has been a flashpoint in the tension that has come with success. The City Council recently passed - then quickly rescinded - a tax on large employers to combat homelessness, which Amazon opposed and successfully worked to strike down. A city councilwoman organised protests in front of Amazon buildings featuring people carrying "Tax Bezos" signs.

Meanwhile, Gates has largely escaped the criticism directed at Bezos and other tech leaders as Seattle loudly debates how to respond to the advantages and downsides of being the United States' fastest-growing big city.

Observers say Gates benefits from being a local and the world's leading philanthropist.

Margaret O'Mara, a historian and University of Washington professor, said Gates came from a prominent Seattle family, arising in the public eye at a time when there was less anxiety about online privacy.

"It's a really, really different public persona," O'Mara said. "He recognised the importance of this responsibility, this broader civic responsibility, that he had great power to be incredibly influential, to deploy his intellect and persuasive powers for good."

Early on, there was some criticism that Gates and his company could be better corporate citizens as Microsoft blossomed. But thanks to the billions he now gives away each year, Gates has managed to shed his reputation as a laser-focused, sharp-elbowed tech billionaire, though his controversial philanthropic work focused on changing America's school systems hasn't gone unnoticed at home.

Microsoft has been headquartered in Seattle's once-sleepy eastern suburbs since 1979. The company is seen as the game-changer that allowed the region to shed its infamous "Boeing Bust" 1970s-era recession when the aircraft manufacturer laid off tens of thousands of workers during an economic slump.

Amazon is far more visible near downtown since starting as an online book-seller in 1994. It emerged as one of the success stories from the 1990s dot-com boom and is now the city's largest private employer with more than 45,000 workers. Bezos, who grew up in Houston, moved to Seattle to launch his startup in part because of Washington state's favourable tax structure.

Bezos - who in the past year surpassed Gates as the world's richest person - recently hinted he too would take on philanthropy in a big way. He said on Twitter that he would announce his plans later this year. Locally, Bezos has been on the board of the Bezos Family Foundation that is run by his parents, which focuses on education nationally.

In January, Bezos also personally gave $33 million (roughly Rs. 227 crores) in college scholarships for young immigrants living in the U.S. illegally. He hasn't signed The Giving Pledge, an initiative launched by Gates encouraging billionaires to commit to giving away most of their wealth.

Where Bezos has been criticised for not being present enough, Gates' nonprofit since 2000 has dedicated resources to helping local community issues. Food banks and domestic violence victims' assistance are among the modestly funded and lesser-known work of the powerful, globally focused Bill and Melinda Gates Foundation. Bill Gates is also credited with delivering a Washington state charter school law through campaign contributions and his foundation's support of the movement.

David Bley, who leads the Gates Foundation's Pacific Northwest unit, said his team is the only one that functions in a more typical family foundation fashion by giving to local causes.

Officially, just 1.5 percent - or almost $70 million - of the $4.6 billion (roughly Rs. 31,600 crores) the foundation gave away in 2016 benefited the needy in the Puget Sound region and Washington state, according to the foundation's annual report.

The Gates Foundation estimates it contributed $1.5 billion into the Seattle economy in 2015. It reports supporting 9,100 local jobs, including 1,200 people at the foundation itself and many more at Seattle-based organisations doing global work. For example, it gave about $270 million to six local organisations in one four-year span as part of its goal to eradicate malaria worldwide, which in turn fuels Seattle's biotech and health research sector.

Still, Gates is not without local critics. One thing the hometown hero can't escape is his national reputation as the leading funder of US education reform. Some of the controversial ideas he's prioritised have floundered in the state over the years.

Washington state defied federal authority when it refused in 2014 to use test scores in teacher evaluations. The concept of tying teacher performance to student test scores was part of a signature Gates initiative but was vehemently opposed by teacher unions.

Gates also gave millions to pass a state charter school law after it failed three times at the ballot. He's had a hand in supporting each of the state's 12 privately run, publicly funded schools even though the law is still being challenged in the courts after its narrow 2012 approval.

"Teaching in the shadow of Bill Gates is, I think, a very ominous experience because we know that his foundation is organised around the principal of privatising our schools, of getting rid of the very institutions that we're working in," said Jesse Hagopian, a Seattle high school teacher and Gates critic.

Teachers have also protested at the foundation's Seattle headquarters over his national schools agenda. The Gates Foundation has said it has an "up-and-down" relationship with Seattle Public Schools. The district wouldn't comment on the matter.

The foundation said it's unapologetic about the urgency it feels is needed to transform school systems that consistently leave behind poor and minority kids.

"We're a funder. We're not government. They have way more money. They have authority," Bley said. "We only have influence and catalytic amounts of money to help people try out new things."

Meet the Future Phones That Fold Up, Have 9 Cameras, and Charge Over Thin Air
Lenovo HX06 Fitness Tracker Launched in India as a Flipkart-Exclusive