Amazon Prime Day 2018 Sale Offers Today: Everything You Should Know 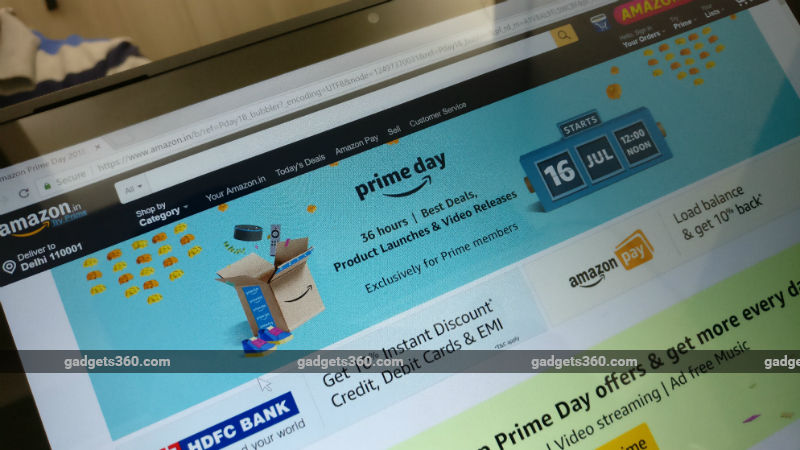 The Amazon sale is scheduled to start at 12pm today

The Amazon Prime Day 2018 sale is scheduled to start today at 12pm IST, and run till 12am on Wednesday, July 18. This year, Amazon India is hosting the second edition of its Prime Day sale in the country, and it aligns with the Prime Day sales across other nations. Ahead of the Amazon sale, the e-commerce giant has revealed some of the offers and deals on products such as smartphones, electronics, and more. As per the official landing page, the Prime day sale will see major discounts on other products such as home appliances, smart devices, clothing, home interiors, and more during the 36-hour period. Also, six different flash sales, starting 1pm IST today, will be held during the Prime Day sale, and up to 10 percent cashback or discount is valid on HDFC Bank card/ EMI and Amazon Pay transactions.

As the name suggests, the deals will be open exclusively for Prime members. Of course, since Amazon's first announcement, Flipkart has announced its own sale at the same time - the Flipkart Big Shopping Days sale - from today to Thursday, July 19.

As mentioned, the Amazon Prime Day sale will begin at 12pm on July 16 and will continue for the next 36 hours. The sale will include thousands of one-day deals as well as the short-lived Lightning Deals. As mentioned, only Prime members can participate, and the membership costs Rs. 999 for a year. There's also a monthly subscription plan of Rs. 129 that you can avail. Airtel even offers Prime Membership free to some customers, as does Vodafone to the subscribers of its Red postpaid plans and 50 percent discount to prepaid subscribers.

Amazon Prime Day Sale 2018 Starts July 16: Here's How You Can Get the Best Deals

First up are the exclusive announcements, Amazon Prime Day 2018 is said to see over 200 new products released for the first time in India. As a part of the Amazon Prime sale, products from brands such as OnePlus, Sennheiser, WD, Godrej, Cloudwalker, Seagate, Samsung, and others will be available with discounts across categories like Home & Kitchen, Daily Needs, Fashion & Lifestyle, and more. Also, an app-only contest will also be held where users can potentially win a OnePlus 6. This sale will also see offers and deals on a list of smartphones from brands such as OnePlus, Vivo, Samsung, Motorola, Huawei, and more.

Will Amazon Prime Day 2018 Be Bigger Than Amazon's Diwali Sale?

As a part of the Prime Day sale, Amazon has announced a quiz for its app users, and participants stand a chance to win the OnePlus 6. In the quiz, you will be needed to answer five questions, and if you answer them correctly, you are enrolled in a lucky draw where you could win the OnePlus 6. Separately, OnePlus 6 variants, including the Red Edition, will be available with a Rs. 2,000 discount during the Amazon Prime Day sale for 2018. Apart from this, the Amazon-exclusive phone Redmi Y2 will go on sale on July 16 at 1pm IST. As mentioned, the e-commerce site has partnered with HDFC Bank to offer 10 percent instant discount to debit and credit card holders. This is applicable on EMI transactions as well. All Amazon Pay users will get 10 percent cashback, and No Cost EMI offers starting from Rs. 1,111 per month will also be applicable on select products. The company is also offering an extra Rs. 3,000 off on exchange of old phones, in order to buy new ones.

When it comes to Amazon Prime Video, following up to Prime Day, the e-commerce site has been adding seven new titles (one per day) to the catalogue staring July 10. These include Dunkirk, 102 Not Out, Comicstaan, Transformers: The Last Knight, and more. There are offers even for Amazon Prime Music - between July 3 and July 15, users can stand a chance to win Echo Dot units by playing 3 songs on the music streaming platform. Additionally, Amazon devices such as Fire TV Stick and the company's Echo range will get exclusive offers, which are yet to be announced. However, certain offers are already live ahead of Prime Day. These include Rs. 100 cashback on the Prime Now app, up to 40 percent off on grocery items, and extra discounts with coupons.

Will Amazon Prime Day 2018 sale be bigger than its Diwali sale? We discussed that on Orbital, our weekly technology podcast, which you can subscribe to via Apple Podcasts or RSS, download the episode, or just hit the play button below.