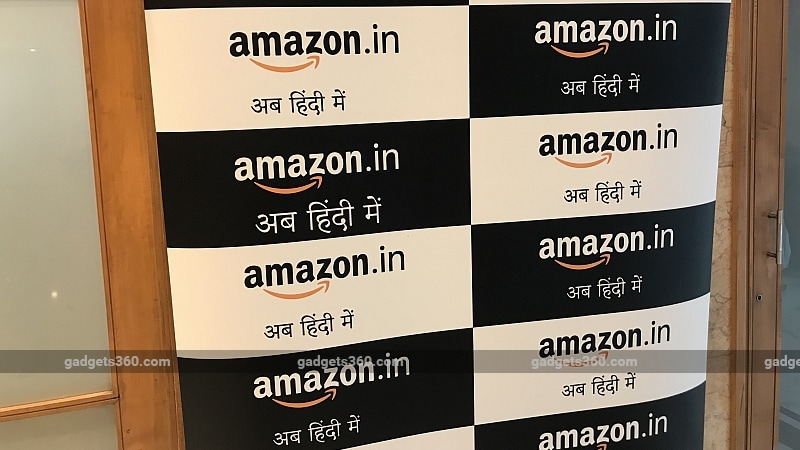 Amazon India on Tuesday surprised Indian customers by launching its shopping experience in Hindi on Mobile Web and the Android app. Apart from scoring a point over its rival Flipkart, the move will help the company reach the next 100 million customers in the country. Platforms such as OLX and Quikr enabled the Hindi language a few years back, while Snapdeal experimented with something similar back in 2015. While that clearly didn't help Snapdeal make significant inroads into the e-commerce market that's now dominated by Flipkart and Amazon, the American company is optimistic about its attempt will help reach out to customers who don't feel comfortable shopping on an English e-commerce site.

"Our thought-process doesn't start from saying how can it boost our business," says Manish Tiwary, Vice President, Category Management, Amazon India. "We just know that our customers would be more comfortable in Hindi as we go down to smaller cities. It's not about the number of customers. If we can even make one customer feel more at ease while shopping in Hindi, it's worth our time and efforts."

Amazon India has a dedicated team which it calls "Reach" that helps to localise the platform as well as tries to "lower the barriers" for customers. The team piloted the Hindi experience before making it public. Instead of transforming the entire website into Hindi through a simple translation, the company says it brought a mix of Hindi and English to make the experience not just appropriate for an audience that majorly speaks Hinglish (the combination of Hindi and English) but also to make online shopping as persuasive for Hindi-speaking customers as it is already for the English-speaking audience.

For instance, words such as "free" have been retained on the Amazon Hindi experience and the literal translation "muft" isn't featured anywhere. Sections like reviews and the prices of the products also currently show the text in English itself.

"We could do a pure Hindi translation - there are many words you can think of them and just describe them," says Kishore Thota, Director, Customer Experience and Marketing, Amazon India. "But it's not the best way to translate and provide information. So just putting it in front of customers is a general way of building products that we do at Amazon."

"We were requiring smart Hindi, not a just literal translation," Thota tells Gadgets 360. "You need human inputs for that. We have people with multiple skills, and we realised that it's very important to have people who are expert in linguistics. I might have learnt Hindi for two years, some people might have gone to a Hindi school, but it doesn't still qualify somebody to say that I can translate it so that all of India or all of the Hindi-speaking customers can understand. It needs a certain kind of understanding to be able to make those choices."

While Amazon India used its existing employees to start the journey of the Hindi experience, Thota highlights that the company also hired few people specifically for the initiative. The Bengaluru-based team is also set to scale up the initial experience by using machine learning (ML) and artificial intelligence (AI) models. "We'll start with tens and thousands of products that have a lot of human input into it but the only way we can get it to the 180 million at one point is through machines," asserts Thota.

It took about three quarters to enable the Hindi experience on Amazon. But this is not likely to be the time for adding newer Indic languages over time as the initial groundwork has already been done. With Hindi already, Thota understands that customers will expect other Indian languages to follow soon. But that may take some time.

"We're currently focusing on getting Hindi right, and it's a new experience," states Thota. "Festive season is coming up, and you should watch out for our Hindi experience to be even better than it is today."

This is not the first time Amazon has brought a secondary language option to a country. Last year, it started offering Spanish as an option for customers transacting via the Amazon.com website in the US. This, apart from offering the Amazon experience in local languages by default in countries like Spain and Germany.

According to a recent study by Google and KPMG India, Indian language Internet user base is expected to hit the milestone of 536 million by 2021, accounting for nearly 75 percent of India's Internet user base by 2021. Among these, Hindi-speaking users are likely to form the largest user base, followed by Marathi and Bengali.

Satish Meena of Forrester Research believes that the latest move by Amazon will also push other e-commerce players to add Hindi as an option on their platforms. "We can expect more similar launches in the coming years as the new buyers on online retail and payments are going to come from languages other than English," he says. "This step will also help in achieving the everything store vision for Indian online buyers by allowing more customers to purchase more frequently and purchase more categories."