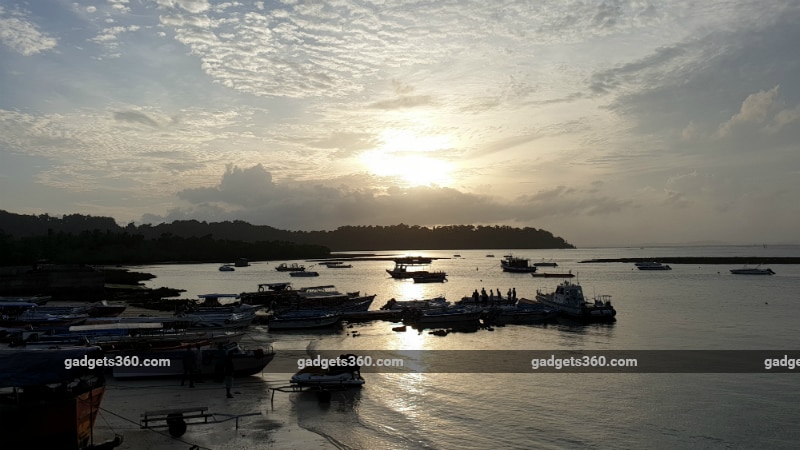 Havelock is a small island, part of the Andaman and Nicobar Islands in the Bay of Bengal

"Havelock is a very small place, and we have very limited options in Havelock," says 31-year-old Shahiba Ashraf who works as an accountant at a local diving school. "We can even say no options in Havelock to buy clothes or any electronics products or any varieties if you go and see around Havelock. You don't get them."

Havelock is a small island, part of the Andaman and Nicobar Islands in the Bay of Bengal. The island with an area of just over 90 sq. km. is 41km northeast of Port Blair, the capital of the Indian union territory. Connectivity is limited to government-operated ferries and private cruises to/ from Port Blair, with an infrequent helicopter service in place as well. Gadgets 360 is on the island at the invitation of Amazon India to see the e-commerce marketplace has gained a foothold in one of the remotest regions of the country.

Ashraf says so far she has purchased dozens of products via Amazon with an accumulated value of Rs. 50,000. She got to know about Amazon through one of her close friends soon after Amazon launched services in Port Blair back in July 2015. Ashraf says her first online order was a digital camera worth Rs. 8,000. "I was little worried initially, but it came on time — four days," she recalls.

Amazon started serving customers in Havelock Island shortly after its debut in Port Blair. The US e-commerce giant partnered with a company called APT Logistics to kick off its operations in the Andamans. Run by Sabiha Mulla and Manzoor Ahmed, the logistics company presently serve six pin codes — including Havelock — in the region, all from the main delivery station in Port Blair. 35-year-old Mulla — who moved from Mumbai to the islands — explains how the company was born out of personal experiences.

"As an e-commerce customer myself, I used to experience a lot of challenges and difficulties in getting packages to Port Blair Island," Mulla tells Gadgets 360. "And there wasn't much of e-commerce presence. Similarly, there was very little retail available here. I did a research work of the markets and understood that yes, there is a lot of scope for e-commerce to start in these islands. That's how we got in touch with Amazon where they were also searching for service partners in remote locations and this whole thing took off."

APT Logistics' Port Blair delivery station that serves as the hub for serving customers located across the Andamans is spread across 1,500 square feet in size. A month after its launch, the station was able to process 50 packages a day. But it is presently claimed to process 25 to 30 times that volume in a single day. That, of course, grows multifold during the big Amazon sales. For the upcoming festive season, Mulla and Ahmed have even rented additional space that has area similar to the existing delivery station.

APT Logistics started its operations in Port Blair with one single delivery associate — the person who actually delivers packages at your home — or DA, as they are commonly called. But now, there are as many as 25 DAs serving all six pin codes in the region. Each DA carries around 40 to 50 packages a day, making two trips from the delivery station to the various address on their path. They make an average of Rs. 13,000 per month and get fuel reimbursement as well as mobile recharge allowance.

"There aren't many problems in delivering orders in the islands," says N Vishwanathan, one of the most senior DAs at APT Logistics. "The one problem that majorly exists here is that sometimes you won't be able to connect to your mobile network. This makes it difficult for us to contact customers. It is also hard to send orders in heavy rains."

Prior to joining APT Logistics, Vishwanathan was working as a security guard in Port Blair. He finds his current job much more exciting than the previous work. Apart from delivering orders, he gets the chance to train new DAs at the station.

The delivery station in Port Blair receives orders directly from Amazon's fulfilment centre in Chennai. Once the orders reach the airport, they are being delivered to the station using small trucks. The trucks are unloaded at the station by the team and the orders are sorted as per the local areas. After the sorting process gets completed, the DAs pick the orders destined for Port Blair and surrounding areas and deliver them to customers using their bikes. The delivery station also has vans to deliver large orders. The vans also help to bring back orders from DAs in case of heavy rains en route.

While the process for delivering orders in and around Port Blair is similar to how Amazon processes deliveries in any major city across India, things change when it comes to delivering orders destined for Havelock, which is another island. APT Logistics groups the orders destined for Havelock and ships them using a cargo boat. The team in Havelocks receives these orders and sorts them further into smaller areas, where DAs deliver them to the doorstep of people on the island.

Generally, the APT Logistics team in Havelock performs the delivery of an order as soon as it is received from the cargo boat. This process, however, gets delayed in case of heavy rains. "You can't do much about it," Ahmed tells Gadgets 360. "But there's a way of handling it. Today, the ferry doesn't go, the boat doesn't sail due to rains, okay, we connect it next day. Next day the boat reaches. So the weather challenge is there [in] connecting Havelock."

Network connectivity is another challenge when it comes to trying to get in touch with customers for delivering products, something we take for granted in the rest of the country. Havelock, which has a population of 5,354 as per the 2011 census, is served by only state-owned BSNL and network issues are far too common across the island. Broadband connectivity isn't any better either. But that hasn't stopped customers from shopping on Amazon.

"In the local market, you won't get that variety of which you get on Amazon," says Amit, who works as a marketing manager at a local resort. "So I feel it's good an option because I get everything in Havelock - everything in my office."

Amit has bought goods worth nearly Rs. 80,000 from Amazon in the last one year, with his most recent purchase a set of water bottles and a tent that he plans to use the next time he holidays in the hills.

Delivering to Havelock has proven to be a competitive advantage to Amazon, with competitors like Flipkart and Myntra only shipping to Port Blair.

"In Myntra, you don't have the varieties, I'm happy with both, but the thing is varieties [of products] are less in Myntra," says Ashraf. "But if you want to go for clothing and all, you can buy [them from Myntra]. But again, you have to give a Port Blair address, not a Havelock address."

Apart from consumers, shopkeepers in Havelock have also started purchasing goods through Amazon to fulfil the demand of customers. "I can see a lot of small shops here buying things like electronic items and raincoats from Amazon," highlights Ashraf. "If a customer asks them for a certain product that they don't have, they order it from Amazon."

But the Amazon experience in Havelock is different than what you and me experience, as cash-on-delivery (COD) payment method isn't allowed yet, and all orders need to be prepaid. Havelock customers also need to send back their orders to Port Blair at their own expense in case of any returns. An Amazon spokesperson told Gadgets 360 that the operations will further be improved over time.

Aditya Vikram Puria of Techmec Electronics, which is one of the popular electronics goods retail store in Port Blair, notes that while Amazon hasn't really impacted the local market due to poor Internet connectivity, the competitive pricing and the large catalogue of products is beginning to influence local customers. "Amazon's growth seems to be unstoppable," Puria tells Gadgets 360.

Amazon uses a pay-per-package model for all its delivery service partners. While the APT Logistics team didn't reveal what amount Amazon pays the company for each package, it confirmed that the operations are profitable.

"I will not say that profit was not important," says Mulla. "Yes, it was. But that was not the primary reason to start this. It was more to provide something to the people of the Andamans. Profits are fine. It's good that we're growing. [But] we are reaching out to a large customer base, which is more important."