18 Years of Google Doodles and the People Who Hate Them 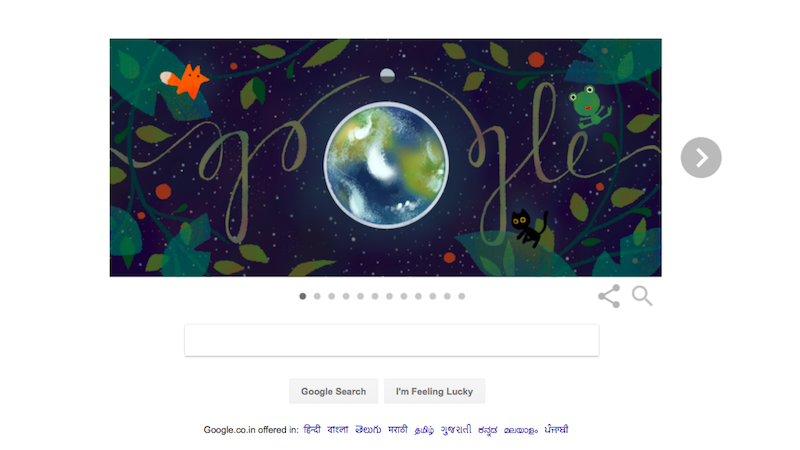 Sunday was Easter, when, according to a long-standing tradition, people all over the world become incensed by cartoons on a search bar.

Sure enough, both men were upset that the holy day had not been marked with a visual pun on Google's homepage - a Google Doodle.

"They loathe Christians," Woods surmised, and he seemed to speak for many.

As Fox noted, Google says it does not make doodles for religious holidays anymore. The last time an Easter egg graced its homepage was in 2000 - near the beginning of the company's doodling tradition and its users' tradition of taking offence at the cartoons no matter what they do or don't depict.

Provocation: A doodle of Earth
Google Doodles started as an obscure joke, as Slate recounted. The company's founders first tweaked the logo to let users know they were at the 1998 Burning Man festival. Three years later, Google changed the double Os in its logo to two globes, for Earth Day 2001.

This proved so popular with the search engine's users that Earth Day doodles became an annual thing. A Google manager, Dennis Hwang, later told Slate he was surprised when users started to complain about the drawings. "We all live on this planet," he noted. "Celebrating that just seemed like a harmless thing to do."

As the years ahead would prove, no celebration was truly harmless.

Provocation: A doodle of a poppy
By choosing certain holidays as doodle-worthy, even ones as bland as Earth Day, Google was by implication snubbing others. "In the eight years of their existence, they've never mentioned Christ," radio host James Edwards complained in the mid-2000s, noting a complete absence of Christmas doodles, to say nothing of Easter.

But these holidays could at least be rejected on secular grounds; Google claimed not to honour any explicitly religious festival. It couldn't do the same with patriotic events.

"For the 8th year in a row, Google has made no effort to commemorate any holiday honouring US veterans or war dead," WorldNetDaily.com wrote in 2006. "No tributes to Veterans Day or Memorial Day."

Faced with a flood of upset users, Google claimed that those holidays were too reverent for the jokey nature of a doodle. But WorldNetDaily was suspicious, noting that Google had added poppies to its logo just a few days earlier - to mark "the Canadian version of the US Veterans Day," also known as Remembrance Day.

Provocation: A doodle of a satellite
If Google thought it could sidestep the culture wars by celebrating scientific milestones instead of holidays, it was wrong.

As the Los Angeles Times reported, many conservatives blasted a 2007 doodle commemorating the 50th anniversary of the launch of the first human satellite - which happened to have been made by communists.

"Not only did Google honour an achievement by a totalitarian regime that was our Cold War enemy," the Times said people complained, "but it did so without having ever altered its logo to commemorate US military personnel on Memorial Day or Veterans Day."

Provocation: A doodle of a fossil
If a Soviet satellite was too polarising, maybe the world could rally around a 50-million-year-old fossil? Surely the lemur-like Darwinius masillae had no objectionable politics.

Naturally, the fossil's 2009 doodle offended creationists. "Not everyone is jumping on the monkey-man bandwagon," WorldNetDaily wrote, after asking Google whether the newly discovered fossil had proved the theory of evolution.

Provocation: A doodle of a Mexican artist
Frida Kahlo was a celebrated Mexican artist who Google honoured in a 2010 doodle, many years after her death.

In the National Review, Mark Krikorian subsequently complained that she - like Sputnik - was also a "loathsome Communist," and her doodle was therefore counted among Google's "sins."

Provocation: A doodle of an American flag
After holding out against critics for years, Google eventually started releasing patriotic doodles for Veterans Day.

The tradition went well enough for several years - until 2010, when to some it looked like Google had drawn a US flag over a cartoon "e" in such a way that the "e" resembled a red Islamic crescent.

Provocation: A doodle of President John F. Kennedy
Google released a portrait of JFK on its homepage in 2011, on the 50th anniversary of his inauguration.

Upon seeing this, a National Review writer pre-emptively worried that President Ronald Reagan wouldn't get a doodle on his 100th birthday the next month.

Reagan, in fact, did not get a doodle (though Kennedy didn't get one on his 100th birthday, either).

Provocation: A children's cartoon
In 2012, Google released an animated doodle for Valentine's Day about two children skipping rope and learning to become friends.

At the end of the cartoon, a montage of happy pairings flashed on the screen, including a cat and a dog, an astronaut and an alien, and two men in tuxedos.

The latter, some thought, was a coded message.

"The infiltration of the ideology that same-sex marriage and the homosexual lifestyle is good for society continues, and the last few days it seems I can't escape it," writer Ann Gundlach complained. "Today, as I was innocently enjoying the delightful Valentine's Day Google Doodle, there it was again."

Provocation: "Not Jesus."
If Google's two-decade moratorium on Easter doodles infuriated some, you can imagine the reaction in 2013, when the holiday happened to fall on the birthday of labor organizer Cesar Chavez, who got a doodle.

Provocation: Soccer
Google celebrated the 2014 World Cup with a series of animated doodles about soccer.

None claimed to see any coded messages or hidden crescents. Nevertheless, Tim Cavanaugh in the National Review called the doodles campaign "to extinguish the most precious of all human rights: the right just not to care about something Big Brother insists you take an interest in."

In case his point wasn't clear, he illustrated his post with a picture of a Nazi soccer field.

Provocation: Non-white veterans
The Veterans Day conundrum may just be a no-win situation for Google. With the Islamic crescent controversy long behind it, the company made a doodle in 2015 of various veterans smiling and waving.

But as RT.com notes, the veterans weren't white enough for some.

Provocation: A high school student's mural
In 2016, perhaps trying to outsource responsibility to the public, Google held a nationwide contest to design a doodle.

The winner was "My Afrocentric Life," by a sophomore from Washington. The mural-like doodle featured Nelson Mandela, Frederick Douglass and the "Black Lives Matter" slogan.

Provocation: Doodles of birds
"What do tropical birds have to do with the Incarnation?" the Daily Wire asked last year at Christmastime.

What indeed? Nothing, probably. Google just released a cartoon of birds exchanging presents for one of its holiday doodles.

But that was all it took for the Wire, among others, to complain that it had replaced Jesus with a toucan.

Fortnite: Why Is It So Popular? Everything You Should Know
God of War PS4 Download Size Revealed