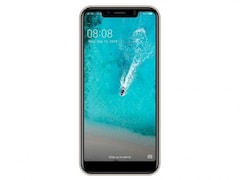 Chinese smartphone brand iVoomi hasn't had as much of an impact on the Indian market as some of its competitors, but it hopes to change that with its “premium” sub-brand called Innelo. The company launched the Innelo 1 back in September, claiming it was the first smartphone under Rs. 8,000 to sport a notch. Since then, we've had a number of phones with notches well below that price level It's now time to see how good the Innelo 1 really is.

The Innelo 1 was built on a tight budget, and one look at it clearly shows this. There's no noticeable flex in the body but the texture given to the plastics makes this phone look a bit cheap. It has a 5.85-inch HD+ display with a resolution of 1520x720 pixels, but there isn't any form of scratch protection, such as Corning's Gorilla Glass. The buttons are placed on either side of the phone but they feel flimsy and there's a lot of play in the power button.

Powering the Innelo 1 is a rather old MediaTek MT6737H quad-core CPU, with 2GB of RAM and 16GB of storage. There is an option to format a microSD card as part of the internal storage, which is good to see.

The Innelo 1 didn't get too hot with regular use, but when playing games, the area around the fingerprint sensor got quite warm. Most apps always run in fullscreen mode, filling up the spaces around the notch. The Innelo 1's UI skin isn't too heavy but it does get laggy when trying to switch between apps. There's a 13-megapixel rear camera which has decently quick autofocus under good lighting. Images shot in daylight were passable but colours were muted and details weren't very good. Battery life is quite weak too.

The phone lags behind the competition on pretty much every count, making it hard to give it any sort of recommendation.