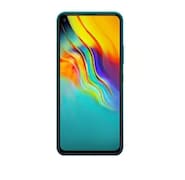 The Infinix Hot 9 Pro runs XOS 6.0 is based on Android 10 and packs 64GB of inbuilt storage that can be expanded via microSD card (up to 256GB) with a dedicated slot. The Infinix Hot 9 Pro is a dual-SIM (GSM and GSM) smartphone that accepts Nano-SIM and Nano-SIM cards. It was launched in Pink and Blue colours.

Need some help?
Infinix service center near you
Price List