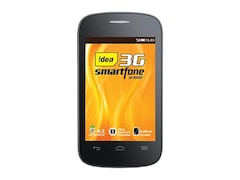 As far as the cameras are concerned, the Idea !d 1000 on the rear packs 2-megapixel camera.

It was launched in Electric Graphite colour.