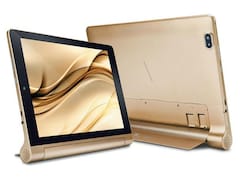 The tablet market has't found long-term traction, and we now see a lot of manufacturers shying away from this product category. There are still a few major players like Apple and Samsung showcasing products like the iPad Pro and the Galaxy Tab S3, but the smaller manufacturers such as iBall, Micromax, and Intex that cater to the lower price segments have slowed down, releasing fewer new models than before. Today we have one such tablet from iBall, which claims to be different. The company says that it is designed for work as well as entertainment, and what's also interesting is that it runs Remix OS, a fork of Android. Is this enough to make the iBall Slide Brace-X1 4G reinvigorate the tablet market? Let’s find out.

The Slide Brace-X1 4G sports a 10.1-inch display with a resolution of 800x1280 pixels. Powering it is a MediaTek MT8783 processor along with 2GB of RAM. It has 16GB of storage out of which 6GB is occupied by Remix OS that is running on the device. Remix OS is a fork of Android which has a PC-like interface. The tablet has a 7800mAh battery that is sealed shut. Storage can be expanded using a microSD card and the tablet accepts cards upto 64GB. The tablet has a MicroSIM slot at the back and supports 4G and VoLTE.