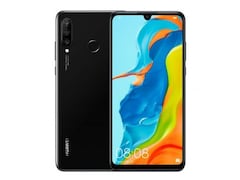 Huawei P30 Lite smartphone was launched in March 2019. The phone comes with a 6.15-inch touchscreen display with a resolution of 1080x2312 pixels at a pixel density of 415 pixels per inch (ppi).

It comes with 4GB of RAM.

Huawei P30 Lite price in India starts from ₹ 17,290. The lowest price of Huawei P30 Lite is ₹ 17,290 at Amazon, and is available in Midnight Black and Peacock Blue colours.