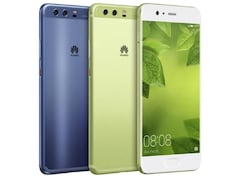 Huawei P10 mobile was launched in February 2017. The phone comes with a 5.10-inch touchscreen display with a resolution of 1440x2560 pixels. Huawei P10 is powered by an octa-core HiSilicon Kirin 960 processor. It comes with 4GB of RAM. The Huawei P10 runs Android 7.0 and is powered by a 3100mAh non-removable battery.

The Huawei P10 runs EMUI 5.1 is based on Android 7.0 and packs 64GB of inbuilt storage that can be expanded via microSD card (up to 256GB). The Huawei P10 is a dual-SIM (GSM and GSM) mobile that accepts Nano-SIM and Nano-SIM cards. It was launched in Prestige Gold, Ceramic White, Greenery, Rose Gold, Dazzling Blue, Dazzling Gold, Graphite Black, and Mystic Silver colours.

Huawei Nova 3i
OR