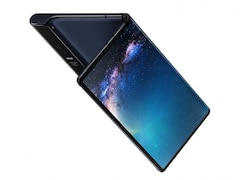 Huawei Mate X smartphone was launched in February 2019. The phone comes with a 8.00-inch touchscreen display with a resolution of 2200x2480 pixels.

As far as the cameras are concerned, the Huawei Mate X on the rear packs a 40-megapixel primary camera; a second 16-megapixel camera and a third 8-megapixel camera. It sports a camera on the front for selfies.