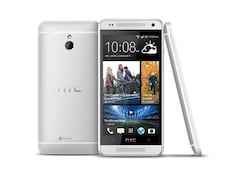 HTC One mini in Pictures

Hot on the heels of the power-packed HTC One comes the relatively lower powered, but also more pocket-friendly, HTC One mini. It's a mini-variant, models that of late have become popular with handset makers.
HTC seems to following a consistent design strategy across the revamped One series - and the HTC One mini certainly seems to bear this theory out.
Could the combination of decent hardware, software and elegant design make the HTC One mini the turnaround vehicle for HTC in the country? Or will its high price kill off its chances? We find out our in our review:

HTC One mini smartphone was launched in July 2013. The phone comes with a 4.30-inch touchscreen display with a resolution of 720x1280 pixels at a pixel density of 341 pixels per inch (ppi).

HTC One mini is powered by a 1.4GHz one-core Qualcomm Snapdragon 400 processor. It comes with 1GB of RAM.

The HTC One mini runs Android 4.2 and is powered by a 1800mAh non-removable battery.

As far as the cameras are concerned, the HTC One mini on the rear packs 4-Ultrapixel camera. It sports a 1.6-megapixel camera on the front for selfies.

HTC One mini based on Android 4.2 and packs 16GB of inbuilt storage. The HTC One mini is a single SIM (GSM) smartphone that accepts a Micro-SIM card.