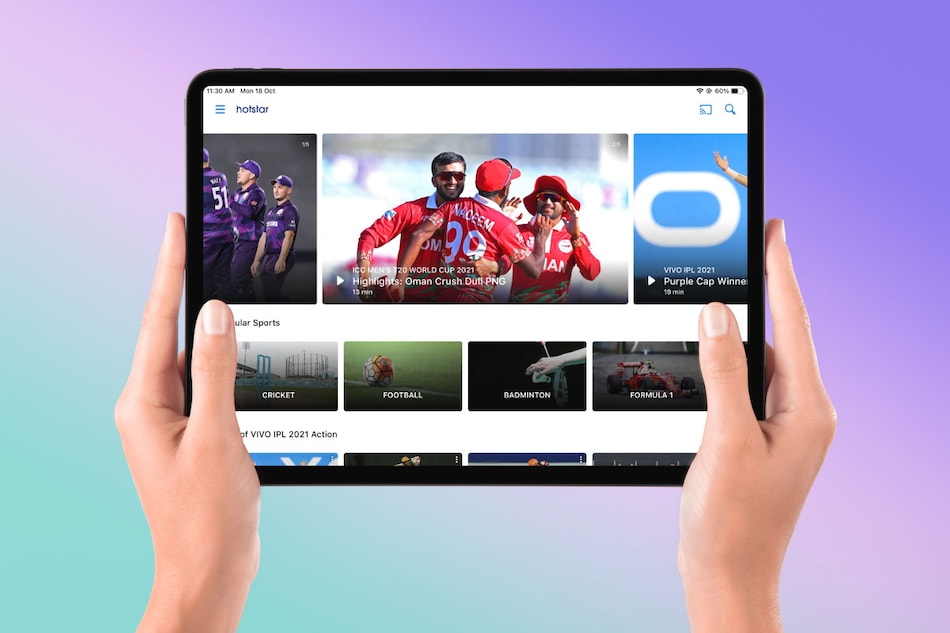 The 2021 ICC Men's T20 World Cup is being streamed live online, and you can follow the action on both live television as well as OTT platforms, in a number of different ways. Here's what you need to know about the 2021 ICC Men's T20 World Cup and how to watch it online. The cricket tournament kicked off Sunday in Oman, with the co-hosts emerging victorious in their opening round encounter. Oman is one of eight teams — alongside Bangladesh, Ireland, Namibia, Netherlands, Papua New Guinea, Scotland, and Sri Lanka — that is competing for four spots in the Super 12.

That's the second group stage of the 2021 T20 World Cup this Saturday, October 23. India is naturally among the big eight waiting on four qualifiers, in addition to Afghanistan, Australia, England, New Zealand, Pakistan, South Africa, and the defending champions West Indies. (The Super 12 will, meanwhile, play a series of warm-up matches.) The top four from the Super 12 will proceed to the 2021 T20 World Cup knockouts, with the semi-finals and the final taking place in the United Arab Emirates. Despite being co-host, UAE doesn't get to take part.

Between the start of the international tournament on Sunday, October 17 and the 2021 T20 World Cup Final in Dubai on Sunday, November 14, a total of 45 Twenty20 matches will be played between the 16 participating nations in just four venues: Abu Dhabi, Dubai, Muscat, and Sharjah.

The first round will feature 12 matches across two groups of four. It began on Sunday, October 17 and will run until Friday, October 22. Matches will be played in Abu Dhabi, Muscat and Sharjah.

Alongside, eight warm-up matches will be played between the Super 12 between Monday, October 18 and Wednesday, October 20. These fixtures aren't competitive naturally, and hence aren't technically part of the 2021 T20 World Cup.

The Super 12 will give us an additional 30 matches, also divided into two groups — of six apiece. The 2021 T20 World Cup Super 12 begins Saturday, October 23 and concludes Monday, November 8, with India due to play in the final fixture. Matches will be played in Abu Dhabi, Dubai and Sharjah.

For those of us in India, all the T20 World Cup matches will begin either at 3:30pm or 7:30pm IST. It's exactly the same timings as the recently concluded 2021 edition of the Indian Premier League, which also took place in the UAE.

And just like the IPL, Disney+ Hotstar is the exclusive home for the 2021 T20 World Cup live stream in India. You can watch every match — from the group stages to the final — on Disney+ Hotstar.

Of course, you will need a Disney+ Hotstar subscription to tune into the 2021 T20 World Cup. If you already have one, that's great. You don't need to worry about anything.

For everyone else, Disney+ Hotstar is more expensive for sports than it used to be, with its plans now starting at Rs. 499 per year for Disney+ Hotstar Mobile. You might even need to fork over more money if you don't want to watch the 2021 T20 World Cup on your phone.

To watch it on your TV or laptop, you will need Disney+ Hotstar Super that comes in at Rs. 899 per year. There's no need for you to spend on Disney+ Hotstar Premium, at Rs. 1,499 per year, as the 2021 T20 World Cup won't be broadcast in 4K. Unless you're planning to stream on four devices simultaneously, in which case the Premium tier is the way to go.

Fret not. The global cricketing body, the International Cricket Council (ICC), has got a full list of official broadcasters on the T20 World Cup website.

In Pakistan, the 2021 T20 World Cup live stream is on the Daraz app. On TV, you can tune into PTV Sports or Asports, depending on the fixture you are interested in.

In Bangladesh, you can watch the 2021 T20 World Cup online on Rabbithole, Bioscope and MyGP. For cable viewers, GTV, T-Sports, and BTV are your best buds.

In Sri Lanka, Siyatha TV will offer live stream on its website, and has TV telecast rights as well. Star Sports will broadcast a few matches too.

In Australia, the 2021 T20 World Cup is available on Foxtel GO, Foxtel NOW, and Kayo Sports. On TV, Fox Cricket is the way to go.

Hotstar is the official broadcaster for T20 World Cup fans in Canada, Malaysia, and Singapore as well. In Malaysia, it's known as Disney+ Hotstar. On TV, you need Willow Canada, or Astro Cricket in Malaysia and Singapore.

In the US, the 2021 T20 World Cup live stream can be found on ESPN+. Following the closure of Disney-owned Hotstar, its sporting rights have been merged with ESPN+. On TV, tune into Willow.

China to Keep Up Scrutiny of Internet Sector: Report